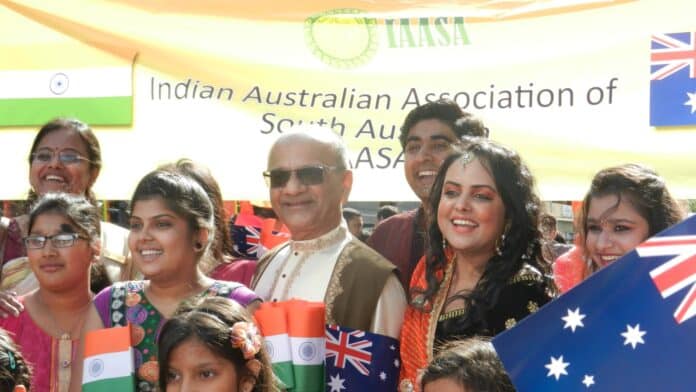 Bring on the dholak with its incessant, rhythmic beat. Bring on the riot of colour and costume. Bring on the children following their teacher in a dance routine. Bring on the crowds lining the streets to cheer us on in encouragement. What better way to celebrate Australia Day and the Republic Day of India which, by happy coincidence, take place on the same day.

For as long as I can remember, the Indian community in Adelaide, under the banner of the Indian Australian Association of South Australia (IAASA), has participated in the Australia Day Parade. This year under the guidance of Dr Rakesh Mohindra, President of IAASA, the Indian participation was organised by Mudra Shah, a member of the IAASA committee. Mudra’s hard work certainly paid off as could be seen in the happy faces of those taking part in the walk.

Although Australia and India celebrate on the same day, often the original reason for the celebrations is lost in the excitement of the day. India became an independent country on 15 August 1947 but it was not until 26 January 1950 when the final version of its constitution was eventually adopted. India’s birth as an independent nation may seem to be quite recent but one needs to remember that the struggle for freedom, liberty and independence had been going on for well over a century. So much sacrifice for the freedom we enjoy in the great democratic nation that is India.

Australia Day, on the other hand, commemorates the establishment of the first European settlement at Port Jackson in 1788. For Australia, it was the start of a new country. So it’s easy to see why there is so much to give thanks for and to celebrate. To live in peace and harmony with people from so many different races, cultures and languages enriches the country and makes for a strong, confident nation.

Adelaide is rightly proud of its Australia Day Parade. With around 4000 participants representing over 100 organisations, it is something to behold. Just so many beautiful costumes from different countries. There were dancers and soldiers and bands, all adding to the variety of the Parade.

The Parade started at 6pm from Victoria Square, Adelaide’s main square, and proceeded along the main thoroughfare to Elder Park where at 7pm the free entertainment and concert took place. The proceedings concluded with the obligatory fireworks sending up showers of colour into the dark night.

Our IAASA contingent comprised around 50 all in national dress. Everyone was excited while waiting for the walk to start. The ladies, as usual, outshone the men in their beautiful and colourful attire. But no one could outdo the sparkling, colourful dresses and bright, alert faces of the little children from the Mudra Dance Academy who were also taking part in the short walk. Some of the proud parents and grandparents visiting from India also joined in.

The dholak wallahs started playing and we set off under the banner of IAASA. We all had flags to wave as we walked along the street, which was lined several spectators deep. There was cheering and waving from the crowd and members from our group handed out Indian flags to children along the route. A happy and relaxed atmosphere on a perfect Adelaide day with blue skies and a cooling breeze made the event quite special. Every now and again, the little ones would break into their dance steps while still walking forward. Undoubtedly, they were the highlight of our group in their colourful outfits and much appreciated and loved by the crowd of spectators.

One final group photograph and the march ended as everyone dispersed to go their own way or join the crowd in Elder Park to await the entertainment. A fine celebration – just as colourful and bright as the fireworks that lit the night sky.