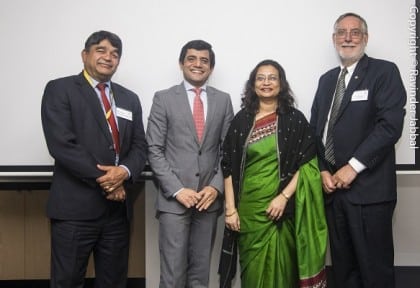 It is no longer relevant to ask if we should invest in India. The question should be when can we invest there, according to Tax expert Gagan Malik, and his answer to that is now.
India has been ranked as a leading destination for investors according to Malik who is the International Director, Asia Pacific Tax Center-India Tax Desk with Ernst & Young.


The Indian economy is inclusive, welcoming and strong, and the current Government is sending the right signals to investors looking at capitalising on its economic growth.
Malik was in Melbourne recently, to provide an overview of the Indian Union Budget 2017, particularly the impact of recent tax reforms for foreign investors.
The event was organised by the Australia India Business Council (AIBC) and sponsored by Commonwealth Bank. It was in line with AIBC’s mission to strengthen bonds and build relationships between India and Australia through promotion of trade dialogue, bilateral business engagement and wide-ranging cooperation.
The evening kicked off with a welcome note from Michael Moignard, President of AIBC Victoria, followed by a brief address from Manika Jain, Consul General of India in Melbourne.
Malik, who held the floor for bulk of the evening, is an advisor on planning and cross border structuring issues with reference to International Tax treaties and Indian tax laws.
According to Malik, Mauritius, Cyprus and Singapore have been preferred holding jurisdictions for multinational companies to structure their investments in India.
This was due to the complete tax exemption from payment of tax on profits made through capital gains, as there was no such domestic levy in those countries. Under the old treaty, companies could achieve non-taxation on sale of Indian Investments.
Last year, however, new treaties and double tax avoidance agreements were negotiated, wherein shares acquired after 01 April 2017 will be taxed at 50% of India’s domestic tax rate if the capital gains arise.
The transition period allowed for this is two years till 31 March 2019. All past investments prior to 31 March 2017 would be grandfathered and not taxed.
The move was made by the Indian Government to avoid treaty abuse, round tripping of funds and prevent double non-taxation thus streaming the flow of investment.
According to Malik, as a result of this parity, people can now invest from any part of the world.

“The point I am making is that Australians companies don’t not need to be too creative, they can now go straight to India and set up,” said Malik. “From now on every company will be taxed at 10% in India if they sell their shares after two years. At least this way, they know their cost, which is a good benefit.”

Malik made suggestions on considering set-up options like Limited Liability Companies (LLC) as they do not attract a repatriation tax.  According to him the tax rate for LLC remains at 33% as opposed to 42% in a company scenario.
He also spoke about Masala Bonds, a new form of investment that is often being used by people and can be used for any purpose. According to Malik demonetization and implementation of GST have proved to be the two most disruptive reforms in India. They will, however, be drivers of change and impact India’s parallel black market.
He went on to explain how the abolition of the Foreign Investment Promotion Board (FIPB) will ease the inflow of Foreign Direct Investment (FDI).
“The Indian Government is focused on easing the path for foreign companies to invest in the country and you don’t need any approval on most foreign investments, barring those that may have security implications,” he said.
He advised investors to avoid litigation and adhere to all compliance as it can take 15-20 years to settle one year of litigation in India.
He wrapped up his session reinforcing how the current Indian Government is considering further liberalisation of FDI to give impetus to foreign investments.
The small audience allowed for more interaction and the evening concluded with drinks and networking.