Can you help Ujwal? 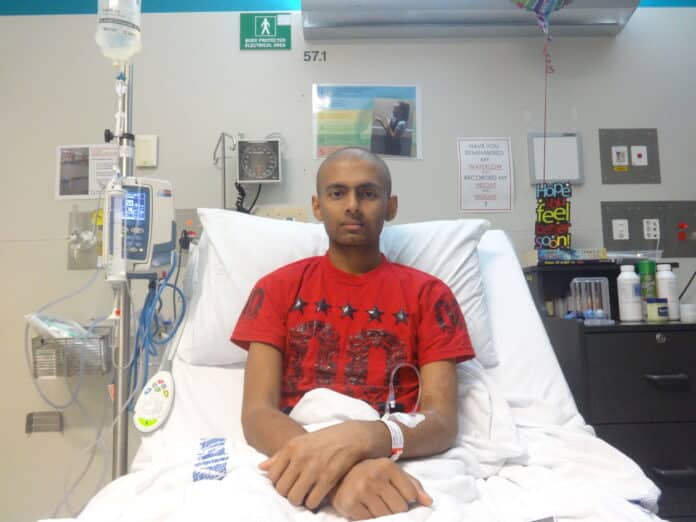 At a time when Australians have poured their hearts out to help the earthquake victims in Nepal, there is young Nepalese man right here in Brisbane who could do with a bit of help too.
Ujwal Poudel, a student at the Queensland Institute of Business Technology (QIBT), was rushed to hospital earlier this year with a shock leukaemia diagnosis and has been undergoing treatment.
Even as his closest friends rallied around him, and his 18-year-old sister flew out to care for him, Ujwal is appealing for help to fund his treatment.
The 21-year-old student came to Brisbane a year ago with high hopes of a stable future and the dream to support his middle class family back home. He was doing a diploma in accounting, and had a part-time job at Nando’s in Paddington.
He was taken to the emergency department of PA Hospital, Greenslopes, and diagnosed with a life threatening illness – Acute Myeloid Leukaemia (AML), a blood cancer caused by over production of immature white blood cells that crowd the bone marrow and prevent it from producing normal blood cells.
Ujwal was admitted on 4 February 2015 and is currently undergoing his third cycle of chemotherapy.
Speaking with Indian Link from his hospital bed, he said, “The two cycles of chemo I’ve had were extremely painful. They shook my body up top to bottom and were so strong that tears would roll down. I can feel my body becoming weaker day by day. I rarely feel fresh, and spend my time mostly sleeping, thanks to the heavy doses of medication.”
Ujwal has been out of the hospital only twice, both times briefly, as his immune system is very low and there’s a high risk of infection.


Ujwal is grateful for the help his closest friends have given him in this time of personal crisis. “My friends Prerna, Bipin and Avinash have been pillars of support. Over and above the emotional support they are giving me, they have also been fund-raising for me.”
It is obvious that they have been his family away from his own family, helping him to accept the hard reality of it all, and then establishing the Help Ujwal Podel campaign.
Currently enrolled at Holmes College, Ujwal has been able defer a semester for the treatment. “My college has given me the option of deferring seeing the criticality of my health and I’m thankful to them for being so understanding,” he said.
Ujwal’s family in Nepal is worried for his health day and night. Unfortunately, his parents haven’t been able to come out as his father has been suffering with TB for the past six months. Ujwal has two younger siblings, an 18-year-old sister and a 14-year-old brother. His sister Anu is here supporting and taking care of her brother. A nursing student in Nepal, she herself deferred her degree to look after her brother and to be a communication bridge between her family back home and her brother.
She told Indian Link, “It’s been very difficult, but I tell myself to stay strong because it’s a hard fight and we have no other option but to be tough.”
When asked what he wanted to say to the donors, an emotional Ujwal said, “Thank you so much for stepping forward and helping me. I will always be thankful for your support”.
Ujwal requests people’s support and prayers.
If you can help Ujwal Poudel in any way, please contact: Prerna 0466 963 786
- Advertisement -
Share
WhatsApp
Facebook
Twitter
Linkedin
Previous articleIndian veterans do us proud
Next articleKonkani play 'Bhogsonnem’ takes Melbourne by storm