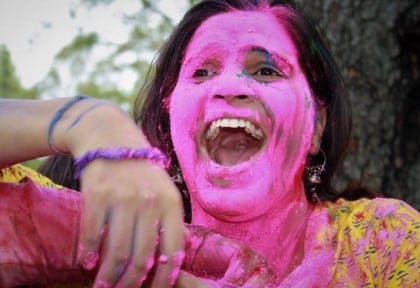 Despite the wet weather, ISWA Holi was celebrated with rang and bang

Though it was a not so favourable day weather wise, this year’s ISWA Holi celebrations were delightful. You can’t imagine the fun we had here in Perth.

The wonderfully chosen venue of Perry Lakes Reserve in Floreat, ensured the event managed to stay bang on as people arrived, not in their hundreds but in their thousands!
Holi marks the welcome of spring and is a celebration of a good harvest and the fertility of the soil. This festival is a special experience as revellers are encouraged to let go of their inhibitions; the intoxicating bhaang is not a taboo on this day and families enjoy the rang, gujhiya and mithai.

ISWA ensured a glorious time was had by all with thousands of multi-coloured faces, giggling kids, vibrant youth and blissfully smiling adults and elderly. There was an array of food stalls serving the best of the best appetising snacks, while upbeat Bollywood songs and foot tapping remixes helped in ignoring the tantrums thrown by rains!
Water slides, water guns, lighter pichkaris, water balloons, and bubble soccer were all on hand provided by the Hindi Swayamsevak Sangh (HSS) with all the proceedings given to charity.

The Dholi Wala was the powerhouse of the audience’s attention as people danced to its beats without a pause! In between, to boost the enormous crowd, water was sprayed to the dance floor.
The smash hit highlight was the dhinchak Bollywood songs played by the DJ including Rang Barse, Bheege Chunar Wali, Tamma Tamma and Balam Pichkari.

People had arrived in huge groups of friends with home cooked food; sitting on their picnic rugs, they were having a blast watching everyone playing Holi. The Aussies weren’t far behind, embracing the festival with fun and frolic.
Such festivities are a great way to rejuvenate the spirit, to let your hair down and do what you feel like. It was hard to recognise faces, friends and folks for company due to the colours and the piping hot chole-bhature and savoury masala chai were delicious. What else one can ask for?

Rain actually added to the oomph of this gathering. The drizzle made the crowd go crazy! All we could hear were the cheers of thousands of happy people. Initially many thought of running back to their cars, but most stayed back to enjoy, even though they were drenched. In spite of the weather, Holi utsav was celebrated with much rejoicing.
It was the best Holi Down Under!