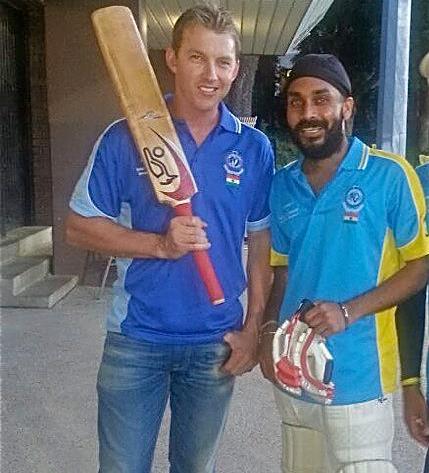 The Commissioner’s XI vs Indian High Commissioner’s International Students XI 20/20 was a one-off cricket game, held on Friday 22 March, which featured Australian Representative cricketers Brett and Shane Lee. The game aimed to help further strengthen relationships between police officers and international students living in Sydney.
“Cricket is a sport that is revered by both nations [Australia and India] so we thought what better way to develop relationships within the community than by hosting a friendly game of cricket,” said the organiser of the event, Detective Superintendent Gavin Dengate, Eastern Beaches Local Area Commander. “Because of different environments and situations people are faced with in other countries, we often find people who come to Australia are hesitant to trust police, as many have trouble doing so in their home countries”. The cricket match is part of a plan initiated by the NSW Police to increase the safety of international students.
Cricket fans came to watch NSW Police play against Indian International students at Sydney University Oval number 2, despite the high humidity and looming storm clouds.

Cricketing great Brett Lee and his brother Shane both showed support for the initiative. Unfortunately though Brett was unable to play due to an injury, and had to follow doctor’s orders to rest. But just having the two cricketers there was enough to show their support, and allowed fans to pose with the two and chat about all things cricket.
“I have spent a lot of time in India and it’s a culture I absolutely love,” Brett Lee said. “I have always been welcomed there with open arms and I want the Indian students who are living here to feel just as welcome, and to know that if they ever have a problem that the police are there to help them. This game will assist in developing these relationships at a grassroots level, and it can only grow from there”.
“It is hard to hear that students have been having a hard time,” he revealed later. “Especially because I never felt intimidated in India”.
“We’ve seen a great game of cricket… despite the rain delay… down to the last over of the game,” said Dave Hudson, Deputy Commisioner, a self-confessed  “cricket tragic”. “The relationship with our Indian Students in the country is an important one [and] we have to acknowledge our commitment to the needs of the community. The students who come out to this country need to feel that they are a part of our culture”. He concluded, “There are strong bonds between [the] police force and the Indian community. Thank you all for your participation and congratulations to the winning team, the students!”
During the dinner Ankita Ghazan, Miss India Australia, sung both the Indian and Australian national anthems.
Indian Link spoke to Gurnam Singh during the match, who is the creator and President of the Swarmy Army, as well as one of the team members of the Indian international students team. He has been playing cricket in Australia since he moved here in 2007.
“I love Australia and Australians,” Gurnam said. Along with studying, he also works, does community work with the McGrath Foundation, and plays cricket, including playing 20/20 cricket for St George and Parramatta. Gurnam plays as a middle order batsman and bowler. “Students who come to Australia, want to play cricket,” Gurnam noted, “which is why events like today are so worthwhile. Cricket helps them to feel proud and confident in this country”.
As Shane Lee said during the dinner, “That’s the good thing about cricket – it can stand above politics and everything”.