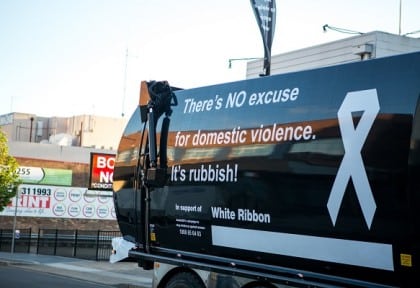 On average, each week one woman dies at the hands of her current or ex partner. This year the number has already reached 66. One in four children is exposed to domestic violence, which is a recognised form of child abuse.
The Australian government has a zero-tolerance policy on domestic violence and child abuse. In the wake of repeated incidents, Australia has toughened its laws, imposing strict penalties against offenders.

In the lead up to White Ribbon Day on 25 November, which is the UN International Day for the Elimination of Violence against Women, and as part of the 16 Days of Activism against Gender-Based Violence Campaign, finishing on 10 December, Human Rights Day, many organisations are taking a public stand against domestic violence by mobilising public awareness campaigns.
The Blacktown Annual White Ribbon Breakfast held on 21 November focused on raising community awareness about this issue of domestic violence by highlighting that violence is a choice.
The event commenced with the arrival of 40 cyclists who had travelled 230 kilometres from Newcastle to Blacktown as part of the White Ribbon ‘Say No to Domestic Violence’ Bike Ride.

The team comprised police, including Blacktown Police Superintendent Gary Merryweather, and community members, who set off on the endurance ride on Saturday 19 November to raise awareness and funds for the cause.
At the event, NSW Premier Mike Baird and Police Commissioner Andrew Scipione spoke to the 600 plus gathering of community members and leaders.
Addressing attendees, the Premier stressed that all men have a role to play in stopping domestic violence. He reminded everyone of the importance of standing up to all forms of disrespect against women. “We have to stand up and say, ‘That is not acceptable,’” he said.

Premier Baird highlighted the measures implemented by the NSW government to help victims of family violence, including a register for women to check a man’s history of violence.
Blacktown ranks 29th in the State for incidents of reported domestic violence. The rate of domestic violence in the Blacktown local government area is 612 incidents per 100,000 people, compared with the NSW rate of 398.
“It [domestic violence] is one of the most unreported crimes,” said Andrew Scipione, who recounted a case that led to the change in the legislation.
“It is the single biggest reason why we have homeless women and children,” the Commissioner added.

“I will stand up, speak out and act to prevent men’s violence against women. This is my Oath,” is a pledge championed by White Ribbon, committed to eradicating men’s violence against women.
“Men need to shatter the silence surrounding domestic violence,” said Dr Michael Kaufman, the co-founder of the White Ribbon Campaign which began in Canada in 1991.
“A vast majority of men have been silent and that silence has allowed violence to continue.”
“The silence gives tacit approval to boys and young men that it is okay to be violent towards their partner. White Ribbon is a simple symbol, a way for men to break their silence,” Dr Kaufman said.

Guest speaker Sarah Ferguson, an award-winning investigative journalist, who wrote and presented the 2016 ABC series on domestic violence Hitting Home, interacted with the audience and shared her thoughts and experiences.
“We need to get rid of this scourge,” opined Ferguson. She said she witnessed extraordinary collaboration between media, police, health and other government services while recording the series, as they opened their doors to her and her crew.
The Blacktown Breakfast helped raise $60,000 for the Blacktown Women and Girls Health Centre and Mt Druitt’s Women’s Activities and Self-help House (WASH) to support victims of violence.

Violence in migrant communities is largely unreported. Domestic and family violence can take many forms. It involves violent, abusive or intimidating behaviour carried out by a partner, carer or family member to control, dominate or instil fear. It includes not only physical abuse, but also emotional, psychological, financial, sexual, spiritual or other types of abuse.
White Ribbon Chairman and Ambassador Andrew O’Keefe asked some hard hitting questions and asked everyone in the audience to reflect on their own attitudes about gender equality.

“We ask too much of the police, the refuges and the hospitals,” he said. “Are we asking ourselves, ‘what am I doing to stop this bloodshed, what can I do to stop this?’ A small stone creates ripples. These ripples reach far and wide. Without the small stone there will be no ripples. Violence is a choice. Do I treat my partner with kindness and respect? Do I stop my friends when they tell sexist jokes? Am I willing to be led by women? Do I give equal opportunities to my sons and daughters in all fields? I may be just a small cog in the system. But with other such cogs, we become a cluster and then change the whole system.”
A group of primary school children from Bankstown Public School performed on stage at the event, rapping and dancing to a song, sending a message to “Say ‘No’ to violence because it’s the wrong thing to do against women.”