Boxing to beat the blues 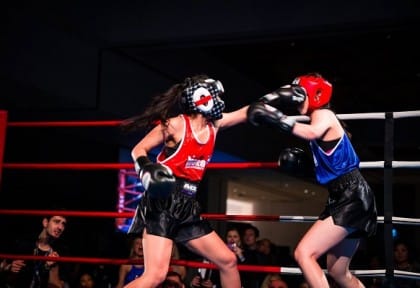 Sydney-based Account Executive, Anushka Rajan recently took on her peers in Pitch2Punch, a corporate boxing challenge held to raise funds for charity beyondblue, and bring awareness to the levels of anxiety and depression within the industry.
It was not a typical corporate function involving drinks, networking and having a great time, though. Pitch2Punch was a black-tie event with a difference as 20 industry peers took to the boxing ring to fight each other.


“The event has been conducted for four years and this was the first time I had a chance to take part,” Anushka told Indian Link.
She had heard about the event and knew about her company’s previous participation, along with a few people who had taken part. But it was an advertisement on Facebook that actually sparked an interest to apply.
“I saw that ad on Facebook and thought about what a great opportunity it would be,” she said, excitedly.
For 23-year-old Anushka the event presented a unique opportunity to push the limits. It was unlike anything she had ever done before. She had to box it out with her competitor in 3 rounds, which lasted 2 minutes each.
“This was a mentally and physically challenging activity,” Anushka explained. “It was something I had never considered doing before – it was quite out of character for me, and that’s what I loved about it.”

With no prior competitive boxing or combat training experience, she had to undergo months of arduous training before the big match.
“I received one-on-one boxing training 3 times a week for 12 weeks to prepare for Pitch2Punch,” Anushka said.
As difficult and gruelling as the training was, she admits that she thoroughly enjoyed the experience.
“The fact that I was doing it for a great cause made all the effort that much more worth it,” she acknowledged.
As a contending boxer, besides combatting her opponent, Anushka also had to sell two tables for the actual fundraiser. With each table costing $2500, her employer generously bought one and, with help and donations from her friends and family, she was able to sell the other.
“This was as challenging as the training itself!” she joked.

Boxing is a contact sport which means the activity typically involves blows, hits and punches to the body. Although Anushka trained for 12 weeks, it wasn’t until four weeks before the big event that she actually had a chance to go up against another person.
“It was nothing like I imagined it would be,” she revealed. “I knew it would be hard, but only when I boxed with another person did I truly understand what I was in for.”
Considering the amount of body contact and physicality involved, a task of this nature couldn’t be possibly undertaken without the support of family.
“I was very surprised to see my mum, dad, brother and grandma being cool and supportive about me boxing,” Anushka said. “I thought they would be scared, but they were in fact more proud than anything.”
“They were a bit anxious on the day I had to box, but never once discouraged me from going ahead with this,” she added.

Anushka’s no stranger to helping her community or supporting various charitable causes. She has put to use her industry experience and education in advertising and communications to assist her father, Robin Rajan, with copywriting for Vision 2020 events. Raising money for South Asian charity projects, Anushka is herself a member of Vision 2020, and is actively involved in fundraising events along with her family.
“I enjoy helping in any way I can for various charities that make a difference in people’s lives,” she said.
Not even an intimidating place like the boxing ring could stop Anushka from lending a helping hand.
“I would definitely jump at another opportunity [to support a cause], but maybe something different next time! I loved the boxing experience but I’d like to try another activity, not necessarily sporting related.”