Bikinis as well as bindis 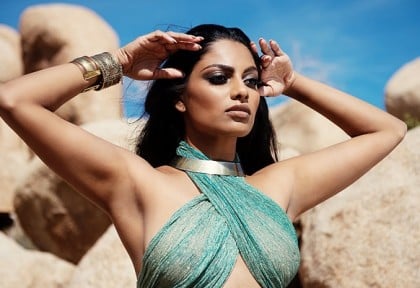 While it may be seemingly antagonistic for women to embrace both saris and bikinis, espouse both traditional Indian and Western values, and to be conceived as both a bookworm and a beauty in theatrical roles, Chandrika Ravi is setting to break societal expectations through her embodiment of multiple female characterisations in the daunting world of entertainment.

An Australian-born and Perth native, Chandrika has epitomised many personas in the limelight; from being the first Indian-Australian to grace a centrefold feature in Maxim magazine as a lingerie glamour girl, to modelling traditional Indian saris for prominent fashion mag South Asian Bride Magazine and performing classical Indian dance from the age of three.
Chandrika’s exposure to the Indian performing arts at a young age galvanised the development of her career as a dancer, model and actress. Chandrika told Indian Link, “My parents enrolled me in Perth’s Temple of Fine Arts to learn the classical arts, as a way of holding on to our culture. Yet, I figured later that this was exactly where my passion lay, so I auditioned for the Australian National Youth Dance Theatre, and got in.”
With the help of her supportive parents, Chandrika’s path to stardom began. “I found my niche in entertainment; in school I did drama and other art-based subjects. Having Indian parents who said do whatever you want and not pushing me to succeed was good, and I knew that I would be able to realise my potential.”

Now, Chandrika moves between Perth, Los Angeles and Mumbai as she advances her career in the modelling and entertainment industry. With appearances in Heineken and Apple commercials, modelling campaigns for Schwarzkopf USA and Beauty Blender and as a Miss World Australia National Semi-Finalist with over 163,000 Facebook fans, Chandrika has already made great headway. Her latest pursuit is an acting role for the upcoming Tamil film Sei, featuring Nakul Jaidev, Aanchal Munjal, Prakash Raj and Nassar. For Chandrika, this first major Indian film role is more than just an opportunity for career advancement – it has allowed her to connect more deeply with her heritage. “It’s something completely life changing. It has been such an amazing learning experience, to be acting in my own motherland with a beautiful film that is so uplifting.”
She has also learnt of the role that cinema plays in contemporary India – not only as a guide to understanding the nation’s changing hopes and dreams, but also in its escapist properties that allow consumers to forget, briefly, the drudgery of daily life.
Although Chandrika has succeeded in creating opportunities for herself in the industry, her journey has not been without challenges. Initially, Chandrika had difficulty in Australia and the U.S, struggling to conform to Western perceptions about the role of the Indian woman.
“No one in Australia was taking me seriously, and I could really only do commercials. But I wanted to do regular acting,” Chandrika recounted. “In America, I fell into the stereotyped class of ‘the Indian woman’, which is usually a doctor or nurse, but at least I found some opportunities, such as acting in television show pilots… I was nicknamed ‘Bollywood bombshell’ in L.A! But I didn’t want to sacrifice it all just for a paycheque. I wanted to step out of the box.”


Additionally, Chandrika found herself somewhat encumbered in Bollywood thanks to the desirability of lighter skin complexions. However, with her guileless and audacious demeanour in standing up for herself irrespective of societal expectations, she has utilised her hurdles and experiences to forge a way through. A gutsy social media strategy helped, especially as it built up her public image.
“People tend to notice I am outspoken, and I have never thought this was a bad thing,” she admitted. “In fact, I post pictures on social media and show my skin colour off even if it is a fight in India!”
She has since become passionate about advocating for women of colour in the world of acting, modelling and performing.
“Ethnicity and race should not define people as they can be anything they want to be. It is possible to be both Westernised and traditional at once; it can give you balance in life. This is what I’m pushing for: rights for Indian women within our culture, and outside of it too. There are many opportunities out there for the taking – but be true to yourself, and respect your culture. That way, you do it your way.”

If this attitude reminds you of certain other successes in the global entertainment stage recently, you’re not wrong. Much of Chandrika’s own inspiration came through admiration of other talents who have paved their way through the cut-throat industries of Bollywood and Hollywood. In particular, Chandrika cited the cross-over career of Priyanka Chopra, who as one of India’s biggest celebs, made an easy advent into Hollywood as lead in the American thriller series Quantico playing an attractive FBI agent. This is one example of a change in perception: Indian women can be more than gawky nerds.
“Priyanka has opened the doors for Indian women in Hollywood.”

Now, Chandrika too is inspiring other South Asians from divergent backgrounds, especially through her philanthropic efforts. She advocates for disadvantaged women in India and works with underprivileged Aboriginal children in rural Australia by encouraging them to participate in the arts. “Sometimes all they need is a little push, and I hope to use my voice, however small, for more power.”
As a driven model, actress and dancer, and advocate for recognising the multifaceted nature of beauty and equal opportunity under the footlights, Chandrika is part of a new generation of diasporan Indian women who are impressing just as much with their outlook as with their talent.
- Advertisement -
Share
WhatsApp
Facebook
Twitter
Linkedin
Previous articleLeading with conviction
Next articleAmbedkar at WSU