Being Bold For Change 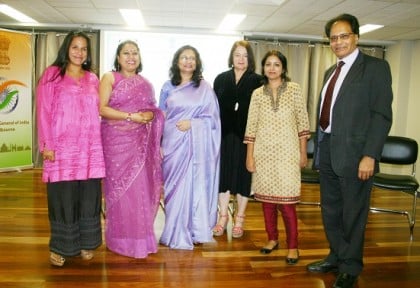 Personal stories highlighted the experiences of women in the community during the recent celebration of International Women’s Day (IWD) at the Indian Consulate in Melbourne.

Whether joyful, candid or sobering, the reflections on their lives were expressive of the multiple realities that women face in today’s world.

Gender and other equity outcomes were central to the discussion despite digressions caused by some participants who unwittingly perpetuated the unconscious bias instead of addressing it as an issue. Their rambling, however, was lapped up in good humour, with a pinch of salt, making for more conversation.
The speakers were selected for their diversity of background and input, according to Consul General Manika Jain, who hosted the event. She admitted that it was a last minute thought and put together hastily to ensure that Women’s Day did not go unobserved.
The rather sparse audience heard about the initial challenges faced by Mind Blowing Film’s Mitu Bhowmick Lange as a “brown, Bengali filmmaker” in Australia, resonating with her stories of struggle to success.
Through Dr Mridula Nath Chakraborty, Deputy Director of Monash Asia Institute, they were apprised of an academic observation on gender parity both historical and current.
Dr Marika Vicziany, Professor of Asian Political Economy and former Director of Monash Asia Institute, dwelled on her migrant experience as a young child in Australia including her later disillusionment with Eastern Europe where her parents came from.
Monika Thukral, Air India Airport Manager, Melbourne, shared an optimistic account of her achievements in overcoming obstacles like gender, age and capability bias to make a significant contribution to her chosen career.


Professor Suresh Bhargava, the Deputy Pro Vice-Chancellor International of RMIT University, as the sole male voice, emphasised the need to not ponder over history but focus on the present to take women’s emancipation further.
The interactive Q and A that followed made for some constructive conversation, the debate heating up on the question of whether Women’s Day events are merely an act of tokenism. The few voices (mainly male), that suggested that the celebrations are purely ‘lip service’, were drowned out quickly by the overwhelming majority who begged to differ.
The emphasis was to broaden the agenda and revise our assumptions about what matters to make sure that gender biases through pay gap, glass ceilings and cultural or structural disparity are removed.
A participant from Nagaland emotionally pointed out the fierce opposition to women’s reservation of 33% seats in Nagaland Municipal Councils by male-dominated tribal bodies in Nagaland.
According to her, this “structural injustice” needs to be addressed as tradition and customary practices are still barring women from participating in decision-making bodies, despite hundreds of years since the first women’s suffrage.

The theme for IWD 2017, Be Bold For Change, encourages people to step up and take groundbreaking action to help drive gender equality. By being leaders within our own spheres of influence, we can initiate coordinated efforts and purposeful collaborations to demand equal rights in the political, social and economic process.
The evening discussion went way past its expected finish as the audience passionately contributed to the gender debate. It was deemed imperative that men and women both do their bit to ensure that the future for girls is bright, equal, safe and rewarding.
A petition entitled Support Naga Women’s Political Voice: 33% Seat Reservation in Nagaland is currently being made by Inotoli Zhimomi and Dolly Kikon from Melbourne.
For more details visit: https://www.change.org/p/prime-minister-of-india-support-naga-women-s-political-voice-33-seat-reservation-in-nagaland