Mary Hutton has made it her life’s work to rescue and shelter bears from a life of exploitation and danger, writes PETRA O’NEILL 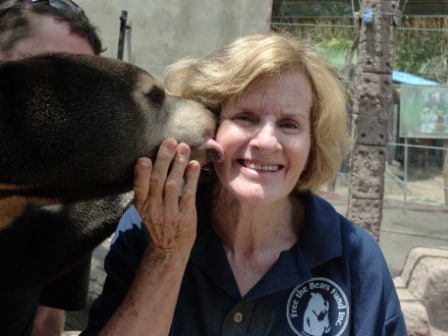 When I first met Mary Hutton, she was speaking at the Sydney office of World Expeditions, the Australian adventure travel company, and she was about to lead a tour to India to visit the sanctuaries established there to care for rescued bears.
In 1993, Mary, a grandmother living in suburban Perth was contemplating her retirement. Instead, her life took an entirely different and unexpected turn. When she switched on the television one night she saw gut-wrenching news footage of traumatised Asiatic black bears, confined in boxes, unable to move, with catheters piercing their gall bladders to extract bile for use in traditional Chinese medicine. On learning that thousands of bears suffer extreme cruelty, Mary embarked on an unstoppable mission to free them.
Mary swung into action collecting signatures at the local shopping mall. Within months she had a group of volunteer supporters and by 1995, the ‘Free the Bears Fund’ was formed. She also learnt of the plight of other bears like the Cambodian Sun bears, killed to make bear paw soup. She brought some that had been rescued to Taronga Zoo, and later to Perth Zoo to start a regional breeding program. Mary then set to work building a sanctuary in Cambodia, now the world’s largest sanctuary for sun bears. In Laos, Mary also established sanctuaries and continues to campaign for the closure of bear bile farms in Vietnam and Laos. Hundreds of thousands of local school children have visited the sanctuaries in an attempt at educating them about the environment and the need to protect animals in the wild.
Mary’s involvement with India was prompted by an email from Maneka Gandhi in 2002, that led to the Free the Bears Fund joining Wildlife SOS (an Indian based conservation group) and International Animal Rescue, in the seemingly impossible challenge of rescuing India’s dancing bears.
The tradition of dancing bears had existed since the 13th century, when nomadic Kalandar tribespeople would visit the palaces of Mughul Emperors with performing wild animals, including sloth bears. Unfortunately, the practice continued through to the twentieth century, with the bears used to entertain foreign tourists at popular sites such as the Taj Mahal. Although the sloth bear has been protected by Indian law since 1972, and bear dancing has been prohibited since 1998, with all bear dancing licenses eventually revoked, it was difficult to enforce this law, since no facilities existed to place the bears.
The Free the Bears fund financed the construction and ongoing care of rescued bears at the Agra Bear Rescue Facility. All the sloth bears that were turned in remained in the sanctuaries due to health and behavioural problems.
The Fund also financed the Kalandar Rehabilitation Program, which enabled the owners/masters of former dancing bears to develop new livelihoods. In collaboration with Wildlife SOS, the Fund made ‘seed’ money available to over 500 Kalandar families to buy equipment and learn new skills, so they could begin new sustainable forms of income, with a basic education provided for their children, in exchange for turning in their bears. Some chose to remain with their bears and gained employment at the sanctuaries.
The Fund paid for 554 rehabilitation packages for the rescue of former dancing sloth bears and supports four sanctuaries. Sadly due to deaths caused by illness, mainly tuberculosis, the Fund currently supports 370 sloth bears at the sanctuaries at Agra, Bannerghatta near Bengaluru, West Bengal and Bhopal (Van Vihar) providing a safe and secure home. When the last dancing bear entered the Bannerghatta sanctuary in December 2009, the pitiful sight of bears being dragged on ropes through the streets was consigned to the past.
Mary maintains contact with the Kalandars, visiting a village recently where cottage industries had been established, with women sewing and the children attending school. Mary is currently developing a volunteer program in India and welcomes volunteers, as the sanctuaries that could not continue without the generosity of donors, whether companies or individuals.
Mary advised that she would be accompanying another tour to Laos and Cambodia to visit the bear sanctuaries in November, after just having her autobiography Free the Bears published.
“Will you ever stop? ” I asked this unique lady. “Unlikely,” replied Mary, with conviction. “With each country facing a unique set of issues to overcome, we employ a range of strategies including environmental education, conservation research and strengthened law enforcement, to ensure that we achieve our mission to protect, preserve and enrich the lives of bears throughout the world,” she added. I don’t think Mary will be retiring any time soon.
At Free the Bears, 100% of donations go directly to the rescued bears. At last count, 554 bears in India and 31 bears in Laos have been rescued so far, with 25 moon bears placed at the Tat Kuang Si Rescue Centre. In Cambodia, 168 sun and moon bears have been rescued, with 127 at the Phnom Tamao Rescue Centre.
As I was completing our chat, Mary mentioned that a little one year old male sun bear had been brought to the sanctuary, rescued by a policeman from a province nearby. Over 80 bears have been rescued in Indonesia, Thailand and Vietnam, and brought to sanctuaries built with support from Free the Bears Fund. Overall, over 800 bears have been rescued and reside in the safety of sanctuaries built or supported by Free the Bears, with over 500 bears relying on the Fund fortheir ongoing care.
For opportunities to volunteer, with commitment the main criteria visit: Freethebears.org.au