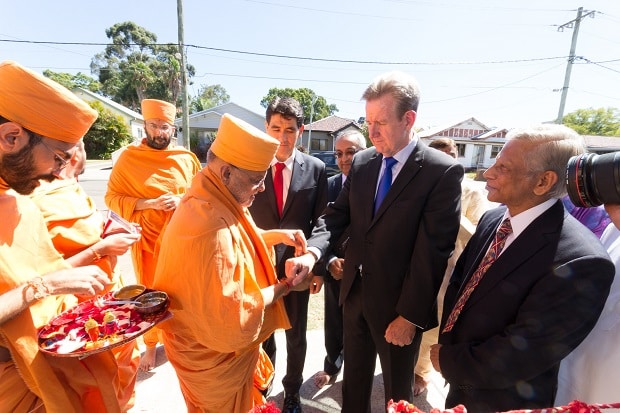 It was a historic week for the Hindu community in Sydney as 3,000 devotees gathered together for the inaugural celebrations of the newly renovated temple at BAPS Shri Swaminarayan Mandir at Eleanor Street in Rosehill.

The week-long festivities began on 6 February with a Swagat Sabha (welcome assembly) and continued till 12 February, packed full of holy celebrations including Vedic pujas performed by priests who travelled from India and the United States for this special event.

NSW Premier Barry O’Farrell with Param Pujya Ishwarcharan Swami officially inaugurated the temple at its Murti Prana Pratishtha ceremony, in the midst of a number of dignitaries and community leaders who attended the festivities. Amongst these were Dr Geoff Lee MP, Julie Owens MP and Councillors Julia Finn and James Shaw.

Param Pujya Ishwarcharan Swami consecrated the temple idols according to traditional rites. In this ceremony a deity’s statue is infused with its soul and power to awaken its holiness and bring it to life within the temple.

The holy event continued on the second day, with Kirtan Aradhna (prayer), and a cultural program presented by the children and youngsters of the temple. For devotees, it was a once in a lifetime opportunity to be a part of this landmark event. The Mahapuja (grand prayers) and the Murti Prana Pratishtha were of major reverence. Mahapuja is a Hindu worship ritual that allows many devotees to simultaneously participate in prayers. During the ritual, devotees offered their humble prayers to seek harmony and world peace as they bowed to their idol and offered flowers.

The BAPS Mandir (temple) has been a part of Sydney’s multicultural landscape since 1996, and moved to its current location in 2000. The original temple deities had humble beginnings, having been were installed and inaugurated back in 2002 by his Holiness Pramukh Swami Maharaj. His legacy continued as the temple grew, marking an exceptional journey over the past 14 years. As the influx of visitors grew each year, it was imperative for the BAPS community to embark on this project and rebuild the temple. The construction of the temple began in mid-2011 and it was recently completed in November 2013, resulting in the grand week-long celebrations.

Not only its effervescing spirituality, but the Rosehill temple’s special amenities are also simply extraordinary. Its aesthetic design is remarkably unique, with dramatically large front gates made of very intricate designs. A large dome designed in the centre of the main shrine seemed to bring in the ambience of a shiny moon in the sky. The temple also boasts a state of the art community centre with facilities like a dining area, activity rooms, prayer hall and ample car spaces.

The Premier heartily congratulated BAPS and the hundreds of volunteers on the completion of the Mandir.

“It is a wonderful achievement reflecting the hard work and commitment of the entire community. It is certain to continue to serve this community as a place to come together in support of your cultural and spiritual growth”, Mr O’Farrell said.

The Mandir in Rosehill is one of the three BAPS Mandirs in Australia, in addition to the ones in Melbourne and Perth. A new BAPS Mandir will open in Brisbane on 15 February, while construction is underway for a Mandir in Adelaide.

The inauguration of the temple was a surreal experience for all the attendees as they basked in the glory of the sacred celebrations.

Yogi Savania, Public Affairs Coordinator of the Mandir said, “It is a landmark event for Sydney and the entire credit goes to Lord Swaminarayan and his Holiness Pramukh Swami Maharaj”. He also acknowledged the support of the 270 volunteers.

For all devotees, this unbelievable spiritual journey through the corridors of the BAPS Mandir was indeed a true experience to be kept in their hearts for rest of their lives, as everyone hailed the glory of Lord Swaminarayan.