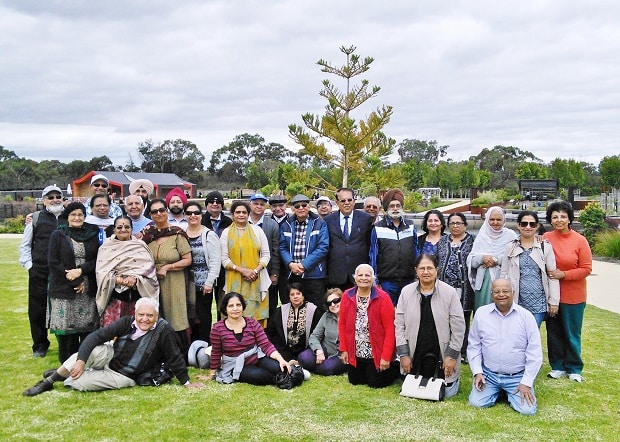 Reading Time: 4 minutesSeniors across various associations in Melbourne take to the great outdoors to enjoy clement weather and company

The autumn and spring months are Mother Nature’s gift to Melburnians, so we may enjoy the outdoors in unpredictable, yet constantly pleasant weather. This resulted in seniorsout for leisure in record numbers. As initiated by Chief Coordinator SK Auplish and Dr Gurdev Rattan of Point Cook, the Indian Senior Citizens Forum (ISCF) chose picturesque Philip Island for a picnic. A bus picked up members from various points and headed towards the venue.

At a spectacular ocean front spot at Cowes, volunteers got busy in serving a delicious assorted sweet and savoury breakfast, as most members had left home very early. After story-telling, Punjabi balle balle and Gujaratidances, we strolled along the beautiful beach and around 3:30pm, chanting the Hanuman Chalisa, we returned home.

From 4pm to 6pm on Saturdays, Sewa International conducts discourses plus yoga and meditation classes for spiritual and physical development of seniors and their families at the Annexe of Clayton Hall. For information, please call Mrs Nirmal Kantaon 9543 6615.

The Northern Region Indian Seniors Association (NRISA) in conjunction with Ivanhoe Library celebrated their annual Indian cultural day. From the last four years, NRISA has been holding this event mostly outdoors. Focussing on the colourful Indian festivals of Holi and Vaisakhi, the library very kindly widely advertised the event resulting in the day attracting a cherished number of over a hundred visitors, Indians and non-Indians, who were offered free packed Indian snacks and sweets. For information on NRISA, please call President Santosh Kumar on 9816 3401.

In their latest meet, the Indian Seniors Association West (ISAW), celebrated the Vaisakhi festival at Errington Community Centre, St. Albans, followed by a buffet lunch at Watergardens Hotel. Courtesy of the State government, ISAW have acquired a projector, screen and wireless sound system, which will provide interesting, educational and entertaining documentaries to members. For more details on ISAW, please contact President Arjan Tulion 9390 2818.

In observance of the Indian Senior Citizens Association (ISCA ) motto of ‘Mutual Help’, a picnic at Cranbourne Botanical Gardens was a first for volunteers to make new friends when ferrying members with no transportation to and from the venue on a sunny Melbourne day. The venue was beautiful, BYO food to share amongst the 40-odd attending members was plentiful, and the company of the group was the best feature of the day. The extraordinary history boasted of by the gardens was unknowntous, the walking tracks were inviting, we sang Bollywood songs, related vegetarian jokes andl aughed until it was time to return home. Following a donation to the gardens, the members ushered a great day to an end. For information on ISCA, please contact President Prem Phakeyon 9803 3989.

Kingston Senior Citizens Association (KISCA) however, cancelled their picnic at Cranbourne Botanical Gardens due to bad weather. President Barbara Nagaya may be contacted on 9893 3427

***
The Federation of Indian Associations, Victoria (FIAV), in a periodic meeting, sought that associations and community leaders propose measures to further streamline the organisation of major festivals and events from different states of India, which may be incorporated in the Constitution, so that the community may constantly keep improving. President Vasan Srinivasan informed the gathering that 28 organisations regularly use the FIAV Hall in Little India. “35 individual music groups which were not moving forward satisfactorily have been brought together under one umbrella,” Vasan stated. The Wine and Food Festival in Little India, a hundred artists performing classical andBollywood dance sat the Moomba parade and the community’s representation on SBS radio and television are feathers inthe FIAV’s hat. The organisation is fighting to have the largest museum on India outside India, plus a retirement home initiated in Little India. Dr Dinesh Parikh, a collector of artefacts for 60 years, proposed to donate his collection to the museum. Vasan stated that a 13 bedroom home for victims of domestic violence has very kindly been donated to FIAV by an Indian philanthropist.

Neville Patel, from the Parsi Association stated that Zorastrian temples are open for those who may wish to learn about the religion. Rameshfrom the Gujarati Association said that he has lived in various states of India and has willingly participated in all state festivals. Moti Visa insisted that we are all Indians; notPunjabis, Biharisor Malyalees, and when together, we must respect the others’ individuality and converse in a language that is in everybody’s grasp. KISCA President Barbara Nagaya talked of the efforts the association is making for the community. Amresh Deshmukh informed members that a forth coming website will provide complete information on the Indian community in Australia. Neeraj Nanda stated that there existed too much diversity in thec ommunity, which mustbe united. Vasan stated that the whisper about living in Oz means giving up our culture was entirely unacceptable. A brief mention was made of a Federal leader’s argument that bigotry is tolerable, with Vasan insisting that, “We loveo ur parathas, our idlis, our roshogullas, and are determined to make (the concept of) bigotry history!” He emphasised that that we must not delude ourselves that Indians are squeaky clean, and since governments distribute $44 billion to make our lives cosy, we should return the favour by being educational service providers and by being exemplary citizens.