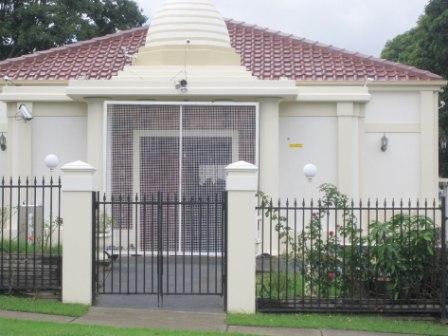 At around 6.30pm on Saturday 23 February an arson attack on Auburn’s SriMandir Temple was attempted. An unknown man tried and failed to ignite a fire on the Cumberland Road entrance gate to the temple.
Detectives and the forensic team from Flemington Local Area Command attended the scene and are currently investigating the matter.
This is not the first time that the SriMandir Temple has been attacked. Minor acts of vandalism, including egg and rock throwing, as well as graffiti, have been commonplace at the temple, but it all escalated with a more serious attack in 2011. On March 19 2011, two men in balaclavas sprayed eight rounds of bullets at the busy Hindu temple, which was luckily empty at the time. The police have been unable to identify the attackers.
In the latest incident this year, a man was seen pouring what witnesses believed to be petrol, onto the entrance gate, before he unsuccessfully attempted to light the fluid with a cigarette lighter. This time the temple had around five worshippers inside, as well as the three witnesses in the outside area.
A witness, Pradeep Khanna, was praying at the time with his wife and another man, when they first saw what they believed to be a person cleaning the gate. This occurred after a person threw a rock into the courtyard of the temple.
Mr Khanna said, “Fortunately the fire did not light because of the damp rainy weather.” He saw the cigarette lighter and jerry can being thrown over the fence before the man escaped from the scene. The back of the attacker was caught on the mobile phone of another witness and was handed over to police. There are hopes that this can help to identify the attacker.
Mr Khanna added, “The incident is not simply a law and order issue, but a community relations issue instead. I am saddened by what has happened but at the end of the day… we have to move on.” He believes that this incident should not deter worshippers.
The community issues referred to are over tensions between locals and the temple over parking and noise concerns. These issues relate to having a place of worship in a residential area.
So far no one has yet been hurt in any of these attacks, or attempted attacks at the SriMandir Temple, which opened in 1977.
At the time of the 2011 shooting attack Rajeev Kapoor, the president of the temple, had said, “The Indian community feels scared and threatened and they are very concerned about the temple.” Prior to the 2011 attack the temple authorities had raised its fence, reinforced external windows with shutters and installed surveillance cameras. After this previous attack they also installed a security screen to deter attacks.
The temple’s priest Jatinkumar Bhatt is concerned for his family’s safety, including his children Jaldhi, Harishree and Raghav, as they live behind the temple.
Inspector Matt Harris of the Flemington Local Area Command Area told Indian Link, “Investigations are ongoing and being undertaken by our Detectives office with regard to the Malicious Damage incident”. In regard to the 2011 incident, he said the investigation has “been suspended after lengthy lines of enquiry (were) exhausted. This has been done with the understanding that the case  may be reopened in the event  that any fresh information of a useful nature was received by police.”
The police have appealed to the public to help identify and locate the offender. Anyone with any information should call Crime Stoppers on 1800 333 000.