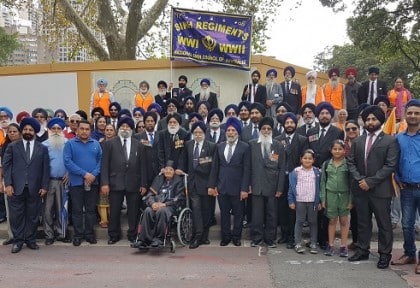 The Sikh contingent marches again, as more evidence is unearthed about Australian Sikhs in World War I

“When you go home, tell them of us and say
for your tomorrow, we gave our today.”
– John Maxwell Edmonds

On Anzac Day, we pause to remember our servicemen and women, and honour their bravery, sacrifice and nobility.

One of the ways the nation does this, is through the annual Anzac Day parade that proudly marches through the main thoroughfares of its cities. Honouring the forces’ commitment to freedom, members of the community line the roads to thank our armed forces for the sense of safety they provide us.
For the past seven years, the National Sikh Council of Australia (NSCA) has organised a Sikh contingent to march in the parade in Sydney. Sikhs who are currently serving, or who have served, and descendants of Sikhs who fought in World War I and or World War II, make up the contingent.

Bawa Singh Jagdev, OAM and Secretary of NSCA, told Indian Link how the contingent has grown over the years, through increased awareness of the Sikh participation.
“We started with 18 people walking in the parade, and the numbers started to grow as we advertised what we were doing,” he said. “Last year we had 50, this year the number is well over 55.”
It is worth noting the incredibly large age range of the contingent, with participants between 19 and 100 years old.

While it was an uphill battle to give Sikhs the opportunity to march, Jagdev reiterates the importance of the contingent.
“It was a battle for us to get into the parade” he noted. “There was little awareness about the Sikh participation at Gallipoli, alongside the Australian and New Zealand forces. We put the case forward convincingly about the Indian involvement in this significant event. Anzac Day is all about the battle of Gallipoli, and we had to remind them that we too served in the British Corps.”

To find the pieces of evidence that convinced the RSL, Jagdev remembers having to look through archives, and requesting photographs from the community at large.
“It is recognition that Sikhs too are Australians, and that we are a part of this country,” he said. “Our forebears fought alongside the Australian and New Zealand forces, and it is important for us to pay our respects to them and others who fought for us.”

In 1922, Saran Singh’s wife, Pratap Kaur, received the British War and Victory Medal on behalf of her husband. The NSCA have obtained the photographs, and continue to work towards raising awareness of the Sikh contribution to Australian society at large.

“As you dig deeper in to the archives, you unearth bits of information that simply amaze you,” Jagdev said. “Any bit of information we get, we grab!”
It is an incredible feeling for the Sikh officers, and descendants of officers, who march in the parade. Polishing their medals, shining their shoes, and donning their uniforms with pride, these men and women represent a rich history.

Jagdev acknowledges that those who walk are “very happy” to do so. “They are honoured to walk to honour and pay respects to their parents who fought for us, and they look forward to walking again,” he said.

Jagdev told Indian Link that although the Sikh contingent “looks different”, the response from the crowd is always positive.
“I have been marching for the last six or seven years, and the crowd always cheers us on. It is a great honour that they are recognising that we are different, but that we also served in the wars. It is a wonderful response from the people.”

“Went the day well?
We died and never knew.
But, well or ill,
Freedom, we died for you.”
– John Maxwell Edmonds