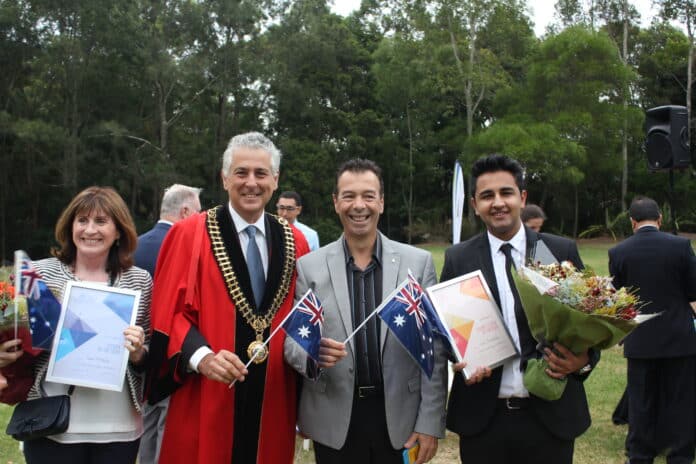 When you first meet Sahil Bhandula, he comes across like any other high school graduate who likes to hang out with friends, watch movies, travel and is looking forward to starting university. But Sahil Bhandula is no ordinary teenager. With a strong desire to give back to society and a maturity beyond his years, this 17-year-old has taken on sensitive social issues spreading the anti-bullying message and the spirit of multiculturalism both in his school and in the wider community.

Recognising his extensive community service and leadership qualities, Strathfield Council recently felicitated Sahil with the prestigious Young Citizen of the Year award 2015 on the occasion of Australia Day.

Humbled by this recognition, Bhandula is grateful to his school, Homebush Boys High, and especially his student Year Advisor, Joanna Chan, who nominated him for the award

“It is a real honour to be named this year’s Young Citizen of the Year. It means I have been recognised for my hard work in 2014, not only academically but also in terms of societal contribution,” Bhandula told Indian Link. “Now I’m even more motivated to work harder over the next few years and initiate other projects.”

Bhandula was born and brought up in Sydney, though his family hails from Delhi. An excellent student, he actively participated in a range of extracurricular activities including hockey and cricket. But it was his crusade against bullying at school and mentoring younger students about the effects of bullying that brought him into the limelight. His successful campaign helped several depressed teenagers speak out and seek advice against verbal, physical and cyber bulling at school and in the community.

“The anti-bullying week was originally our school captain Vidhushan Paheerathan’s idea. We were aware that bullying was an increasing issue amongst schools around NSW with a rise in the number of depressed teenagers,” Bhandula explained. “This anti-bullying week involved talking to younger students about their bullying experiences during breaks and discussing how we can tackle this issue.”

From initiating focused discussion groups to making the school take a pledge against bullying, Bhandula helped to organise activities to educate and support students.

Along with this, some artistic students from the school created an anti-bullying banner which was signed by over 600 students, reinforcing their stand against bullying.

“During the school assembly the students took a pledge to stand against bullying whether they are the offender, the victim or a bystander,” Bhandula added.

The discussion circles had great participation among the school’s 1200 students, with a huge response amongst the younger students, particularly Years 7, 8 and 9.

“Entering high school can tend to be intimidating for younger students, but surprisingly a lot of them were willing to share and open up about their past experiences,” Bhandula said. “(They) guided us to a better understanding of the types of bullying that was taking place.”

“I personally have never been bullied, however I have witnessed it on some occasions and tried my best to prevent it or stop it,” Bhandula said.

While at school, Bhandula was also a member of the Interact Club which raises funds for Amnesty International, and donated his time to organising Multicultural Day performances.

Talking about his future plans, Bhandula will be pursuing a Bachelor of Law and Commerce at Macquarie University and intends to continue his involvement with charity organisations that promote multiculturalism.

“I work with a team of dedicated individuals to organise charity events as part of the Ekal Youth Australia organisation. We are a not-for-profit charity, organising events in the community to raise funds for children in rural India who are unable to afford basic education,” Bhandula explained.

“Through dance events such as ‘The Rhythm of Bollywood’, which is successfully in its third year running, we are able to gather the youth of Sydney to celebrate with food and entertainment whilst raising money for children overseas,” he continued.

This year the Rhythm of Bollywood will take place on the 21 March at the Marana Auditorium in Hurstville.

For Sahil Bhandula, social work seems to run in the family, “My sister is the original president of Ekal Youth Australia and she has visited many of these rural villages and seen the conditions and the changes made as a result of their fundraising.”

“I look forward to visiting (the villages) very soon, perhaps even at the end of this year, and seeing the impact we have made on the lives of these young children.”