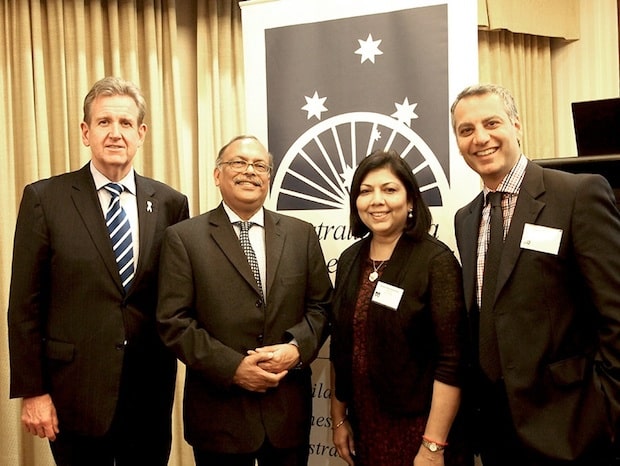 Reading Time: 7 minutesTransparency and accountability are the big issues in the AIBC elections

In August 2011, former Indian High Commissioner Sujatha Singh took direct aim at the Australia India Business Council (AIBC) in her address on the occasion of the 25th anniversary of the council.

In an extra-ordinary attack, she expressed her frustration that the AIBC had not fulfilled its potential in “exponentially expanding the economic relationship” between India and Australia. She publicly asked for it “to transform itself to become a truly effective body” and play a more important and representative role. She alluded to the fact that it seemed obsessed with process rather than focusing “on issues of substance”.

Singh conceded that on its own, the NSW chapter was functioning well, so it was apparent that her swipe was at the organisation’s operations at the national level which are yet to be at par “with the most professional Business Councils in Australia and India”.

Indian diplomats rarely speak out in unobfuscatory language and the audience certainly grasped (if not, gasped at!) the disappointment of the High Commissioner and the timing, venue and importance of her message delivered right between the eyes, at the organisation’s Annual Dinner in the presence of an array of senior politicians and business folk.

If the former High Commissioner, now Foreign Secretary and a well-respected diplomat, had to make this speech again, do you think she would have something different to say? This was the question which was asked to the major contenders for the posts of National Chair and Vice Chair for the AIBC National Election 2014.

Incumbent National Chair Dipen Rughani, who has been with the AIBC for over four and a half years and its National Chair for two years, did not respond directly to this query, stressing instead on the achievements of AIBC in the last 24 months. Rughani highlighted the achievements in forging closer relationships with partners in India such as the Federation of Indian Chamber of Commerce and Industry (FICCI) and the Confederation of Indian Industries (CII).

Contesting against Dipen Rughani for National Chair, is David Trench. David, based in Western Australia is Executive General Manager in charge of Market Development at Griffin Coal. He chose not to comment on the issue as he was not present at the function at which Sujatha Singh spoke, but was keen to talk about how to set AIBC up for a stronger future.

Where both the contenders show a point of difference, is Dipen Rughani’s insistence in having the right internal structures in place. “As we transitioned from the old unincorporated structure to the new company AIBC Ltd when I took over as the Chairman, the Board of Directors were keen to get our new organisational governance, processes and systems in place,” he told Indian Link.

David on the other hand is keen to get things moving more quickly. “Organisations that work inwardly or spend more effort working in the organisation rather than on the organisation are limited in their ability to see the larger image they portray. Spending large amounts of time on process in attaining accountability and transparency without considering the reasons and benefits of why, often leads to the organisation becoming “bogged” down and losing their nimble ability of meeting their core objectives. It is one thing to state you are open for business, available for engagement, when you stand behind a closed door with the lights off! Representative bodies are there to represent their members, the viewpoints and the common agenda; to achieve this they need to engage their membership, communicate, and be ultimately mindful that the more engaged the membership the more the agenda can evolve, so the organisation becomes sustainable”.

Aspiring for the position of National Vice Chair is current AIBC NSW President Sheba Nandkeolyar. Nandkeolyar is a successful business owner in her own right and wants to carry this over to AIBC to the national level. She is keen for AIBC National Directors to demonstrate accountability, integrity, transparency, inclusion, teamwork and passion for the Australia-India business relationship. “All Directors need to reflect the above and while the members have declined rapidly in one particular state, the rest of the states have not had any such issues,” she said. “The membership will grow rapidly if the above values are followed”.

“AIBC NSW has been at the forefront in terms of transparency, policy engagement and member initiatives, and I am truly pleased with the AIBC NSW Chapter,” Nandkeolyar added. “If I were to take on a national role, I would strive to ensure that all state chapters operate like the AIBC NSW, in a transparent and inclusive manner. The AIBC website which is meant to have all information listed publicly about the state chapters, will demonstrate this”.

Wanting to enter the team at the national level as Vice Chair is Gautam Gupta from Victoria. A councillor at one of the fastest growing local councils, Wyndham in Victoria, Gupta is scathing in his comments about the current workings of the AIBC. He feels that it has failed, and his experience is that both membership and revenue for AIBC have declined. In 2012, there were 541 eligible voters and this has dropped to 491 in 2014, he claims. “Instead of AIBC growing, we are going backwards”, he observed.

Gupta also alleges that monies are being spent without correct procedures and he is keen to bring in ethical standards that will transform the way AIBC conducts business by connecting business, government and communities. “In doing so I will use Australian ethical standards,” Gupta noted.

“The AIBC board fully documents our meeting minutes and decisions of the board,” stated Rughani. “The approved minutes are on our members-only section for all financial members to view. We have also uploaded our audited financials for 2011 and 2012 for our members to view. As far as the board is concerned, there are no financial irregularities, mismanagement or infighting. The members after recommendations from the board at the 2013 AGM have allocated a very reputable firm in Mann Judd to audit our accounts. We are looking forward to their report for 2013, which will be made available to our members as soon as it is approved”.

Not willing to let this go, Gupta claims that for the year ending December 2013, AIBC’s audited annual returns are still not available even though we are already into May 2014. “Even the 2012 returns were provided only recently after many emails,” he added.

He has his own vision of what needs to be done on creating greater transparencies and accountability in AIBC.

“It is important that a membership-based organisation treats all its members with respect,” Gupta noted. “That means, making sure all minutes are made available. There needs to be registers maintained to explain how we spend close to half a million dollars on admin and travel. It is not good enough that the financials are not audited in time and hence not available for scrutiny. If any executive is, or has the potential to use AIBC links for personal gain, then there must be a system to question, and if possible, to sack them. This happens at all levels of government in Australia and I see no reason why it should not be a standard we should aspire to. Furthermore, it is important to separate personal offices from AIBC offices. There are a few incidences where AIBC is operating out of personal/private businesses of office holders, where payments have been made to office bearers to render services without any tender process. This must stop. Business opportunities must be shared with all members and they should be encouraged to participate in the process without favour of fear”.

Regarding Singh’s comments, he said, “I am not sure of what information she will have today, now that she is not in the country to observe the situation at hand. However if she was disappointed then, she should be terrified now. The need for transformation has never been greater. We are almost at the end of our bandwidth where inaction will only serve to bring disrepute to our industry and businesses. Time for ethical transformation is now. It also highlights an issue to not have half of the National Executive from a single state. This will come at a cost to its national identity”.

Looking at how Business Councils of nations such as China and Israel work in Australia, AIBC is way behind and little seems to have been done to take advice of the former High Commissioner. Membership of AIBC has stagnated, sponsorships are down, state-based differences are limiting the growth, and where the India-Australia relationship is growing, it seems to be more organic rather than through the AIBC’s substantial promotion.

There seems to be no dearth of passion by the contestants; the challenge will be for the victors to maintain the rage in a positive way as 2014 is shaping up to be a crucial year for the Australia-India business relationship. A change in government in India and the inclination by the Abbott government to build on the Labor government’s initiatives with India can provide a powerful momentum to consolidate AIBC’s position as a premier Business Council in Australia. If they fail to do so, the damage will be severe.