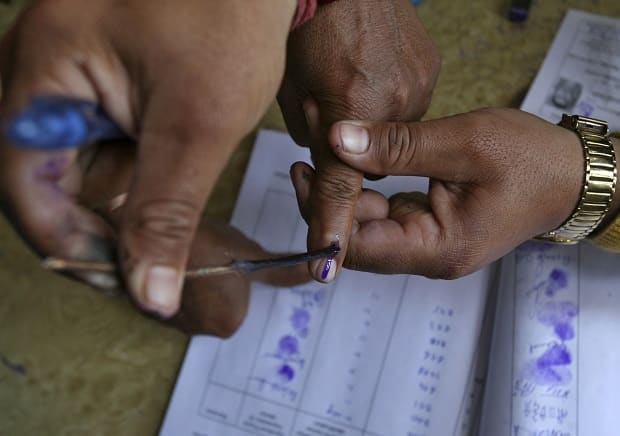 Reading Time: 4 minutesSteady and systematic voting continues in India, despite the staggering size of its electorate

The world’s greatest democracy is in the midst of making history as citizens of the Republic of India go to the polls to elect a government in the General Elections 2014. The country’s over 25 million diaspora globally, are among those watching and waiting to see how the elections pan out and what the ultimate result may be. So what makes this election unique and historic?

India is the second populous country of the world, with its 1.2 billion people, and counting! It is the seventh largest country in the world by area, and the most populous democracy in the world, which is why news about the ongoing elections is trending across the globe. Voting will take place in all 543 parliamentary constituencies of India to elect members of parliament in the Lok Sabha.

Yes, all 814 million of them! It’s a mind-boggling fact to even imagine that such a vast number are eligible to vote in the elections, and that, at the time of going to press, over 170 million, have already cast their vote in 111 constituencies, choosing from more than 1,500 candidates in the elections. The total number of voters at the 2014 elections is 100 million more than those eligible in the general elections of 2009. The voting is conducted in nine phases, and will conclude on May 12. Votes will be counted on May 16.

In a first, India’s transgender community is being recognised for the first time and can vote under ‘third sex’ or ‘others’, a category that didn’t exist in the last elections. 28,314 voters have registered as transgender.

The voice of youth

Of the total population, 168 million or about 20%, will vote for the first time. This means that the youth of India will be in the unique position to make a difference and have their votes cast for the party that best reflects their interests. The age of being entitled to vote is 18 years in India means that more than 23 million voters comprise of younger generation aged between 18 and 19.

The country has the largest population of youth in the entire world — 66 per cent of the total population in the country is below the age of 35.

Nearly 40 per cent of the Indian population is aged 13 to 35 years. It is clear that targeting the youth would be a sound strategy for the political parties, as their influence could tip the scales of power.

Selfies showing voters inked fingers have been making the rounds on social media sites, including one of cricketer Suresh Raina who tweeted “I have done my vote, have you?” Accompanying other photos have been messages including, “my vote, my pride”.

There were many who posted only their inked finger, a “Fingie” or an “ungli”! Now that’s patriotism!

For those disgruntled voters who didn’t find any of the political parties and their manifestos convincing, they had an option to exercise their vote for None Of The Above (NOTA). This button was sought after by a significant number of people and should make an interesting statistic when the election results are posted.

Incredibly, 919,000 polling stations have been set up across the country, with approximately 3.6 million Electronic Voting Machines (EVM). The Election Commission of India (ECI) has endeavoured to ensure that no voter travels more than 2 kilometres to reach a polling station. Each polling station has to manage no more than 1,500 voters.

It is reported that more than 62,000 electors in the national capital checked their names on the voters lists through a mobile phone message facility. The ECI also had a message helpline number for voters who could check their names on the list before going to the polling station to cast their ballot.

the Systematic Voters Systematic Voters’ Education and Electoral Participation (SVEEP) – an initiative to motivate people to come out and vote. There is also a newly-introduced paper trail in EVMs, which was being used in selected polling stations of the national capital.

The election is estimated to cost about $US5 billion (or 300 billion rupees), according to Centre for Media Studies via Bloomberg. And considering that the US general elections in 2012 cost a mere USD7 billion, would give you an idea of the scale of this exercise.

The ECI announced that it expects the voting percentage to touch 70 per cent or more; a 12% increase from the 2009 elections.

Over 10 million people have been employed to ensure that the election process is as smooth, effective and fair. Among these are elected officials, army soldiers and temporary workers.

Special “flying squads” have been set up to monitor campaigns and ensure that there isn’t any bribing of voters with cash, alcohol, and even prescription medication, reports the Times of India. These flying squads will be made up of administration officials from various districts and will also keep tabs on campaign vehicles.

Candidates standing for elections are being monitored and those inciting racial or inflammatory feelings are being banned from campaigning.

India has a staggering 1,617 unrecognised political parties, while there are six national and 47 state recognised parties. The big guns are the Congress and the Bharatiya Janata Party (BJP), but the Aam Aadmi (Common Man’s) Party with its focus on anti-corruption, could disrupt the agendas of the main parties and bring forth a surprising result. Anything’s possible in the world of Indian politics!

So what can we expect from the 2014 elections? All will be revealed post May 16!