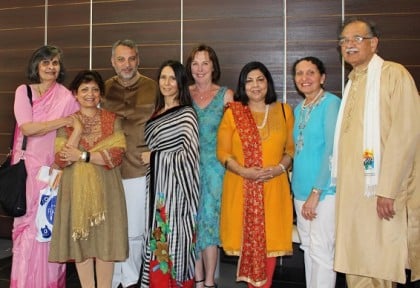 The festive spirit was in the air as the lofty door at St Mary’s Church (Our Lady of the Way) in North Sydney opened to churchgoers attending the late morning Sunday Mass.


Non-Indian Catholics and non-Catholic Indians congregated on 13 November to celebrate a special Mass on the occasion of Deepavali, the Festival of Lights, one of India’s biggest festivals.
While Deepavali is primarily a Hindu festival, it is also a time of general celebration by Indians of all religions, with special Masses in India, as well as many other countries with communities of Indian origin.
In keeping with this spirit, the congregation was joined by a number of people of Indian origin, belonging to Christian, Hindu and other faiths. The special Mass incorporated elements of Hindu culture in a tribute to the Indian festival. The altar and pulpit illumed in the light from diyas, and the sanctuary looked resplendent with colourful flowers.

The Mass began with the lighting of the ceremonial lamp, and trumpeting of a conch shell, a ritual object in Hinduism. Christian hymns and prayers were recited in Indian languages like Hindi and Gujarati, and Sanskrit mantras were chanted. Children performed the aarti (worship with light), and pushpanjali (worship with flowers) to the Eucharist.
“It is the victory of light over darkness, and that’s why we have chosen this symbolic representation,” said Fr Phil Crotty SJ (Society of Jesus), the main celebrant at the Mass, and one of the Jesuit priests of the St Mary’s community.

Fr Crotty SJ lived and worked in India for over 50 years, and is also fluent in several Indian languages. In his homily, he shared his thoughts and understanding of Deepavali. His use of Indian words, coupled with his unique personal reflections of its celebrations, helped the congregation appreciate the festival’s significance.

‘Prema Jyoti’ in Gujarati language was sung for the Eucharistic hymn, creating a moment for self-reflection – to dispel the darkness from our lives. The hymn is a translation of Cardinal Newman’s “Lead, Kindly Light,” by the Gujarati poet and linguist Narasimharao Bholanath Divetia, at the request of Mahatma Gandhi, as it was his favourite song.
Other elements incorporated at Mass included use of Namaste (for the sign of peace) and Dandiya Raas (for the recessional) a traditional folk dance form of Gujarat.

Neville Roach AO, one of the members of the parish organising committee, was instrumental in arranging the Mass. He was encouraged by the community’s enthusiastic response to similar celebrations of cultural-themed Masses, such as Chinese New Year Mass and the Aboriginal Masses held a few years ago.
Mr Roach emigrated from India decades ago, and has ceaselessly endeavoured to bridge stronger links between India and Australia, at government, business and community levels.
In the spirit of such cultural exchange, the congregation came clad in colourful traditional Indian attire, representing their respective region of origin. A time of fellowship followed at the parish hall, and refreshments in the form of Indian snacks and sweets were served.

Non-Catholics who were in attendance expressed happiness at being part of the celebration, as it helped them to better understand the significance of the holy Eucharistic celebrations to Catholics. This gesture in itself highlights Australia’s continuing commitment to diversity and multiculturalism.
The presence of B. Vanlalvawna, Consul General of India in Sydney, along with his family, underlined the significance of the occasion.
During his papal visit to India in 1999, the late Pope John Paul II held a special Eucharistic celebration in an Indian church. “On the occasion of Diwali, the festival of lights, which symbolises the victory of life over death, good over evil, I express the hope that this meeting will speak to the world of the things which unite us all,” he said.
The Indian community in Australia is growing rapidly. Australians who identify themselves as Aussie-Indians are more than 400,000 and counting. Events such as this continue to illuminate the true meaning of Deepavali and the paramount need to respect and appreciate each other’s cultures and religious views.
- Advertisement -
Share
WhatsApp
Facebook
Twitter
Linkedin
Previous articleChange of guard
Next articleOn Trump, Uber and money matters