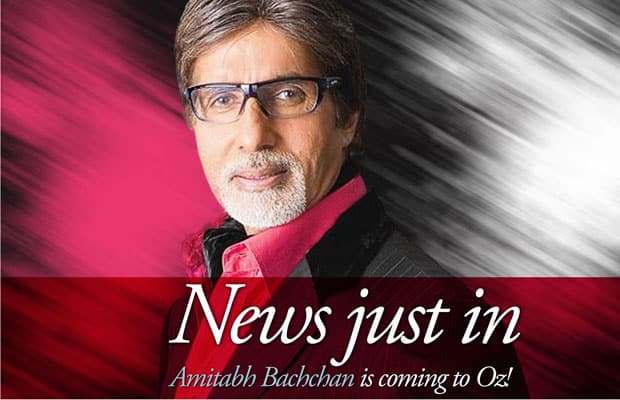 The Film Festival of Melbourne (IFFM), Australia’s premier annual celebration of Indian cinema, has announced today that Amitabh Bachchan will lead the stellar guest list at this year’s festival.

Festival Ambassador leading Bollywood actress Vidya Balan, was in Melbourne this morning to make the announcement with Festival Director, Melbourne’s Mitu Bhowmick Lange, at the official launch of the event.

“It was a great sense of personal achievement for me to see this festival grow each year and also to have Mr Bachchan be a significant part of it this year,” Vidya said at the conference on 28 March.

IFFM 2014 will take place 1-11 May 2014 in Melbourne (and as Beyond Bollywood in Sydney) with screenings of contemporary Indian cinema, gala events, master classes with India’s leading film figures and an international short film competition.

Mitu Bhowmick Lange announced that the film festival will kick off on 1 May with the Australian premiere of the newly-restored Sholay 3D, followed by a Q&A with the film’s star Amitabh Bachchan.

“We are really delighted to open the festival with a screening of this most cherished film,” she said.

The western-style action adventure film is critically regarded as one of the best Indian films of all time.

Last year, Amitabh Bachchan, the Indian film industry’s most iconic star, was scheduled to close the IFFM at Melbourne, but his visit was cancelled at the last minute.

Mitu Bhowmick Lange, Festival Director, admitted to being disappointed. “With Indian cinema’s 100-year celebrations, having Mr Bachchan close the event last year would have been the perfect finish,” she said.

She had revealed last year, though, that Mr Bachchan’s office had committed to his attendance this year.

Fans who were waiting to see their idol in the flesh, were left content last year to see him in a different avatar – on screen in Baz Luhrmann’s The Great Gatsby.

Amitabh’s previous visit to our shores was in 2011, when he was filming the magnum opus. The same year, he accepted an honorary doctorate conferred on him by the Queensland University of Technology (QUT) in Brisbane on 20 October. He had turned down the offer once before, in protest against Australia’s alleged treatment of Indian international students here. But he was able to change his views upon learning the full facts.