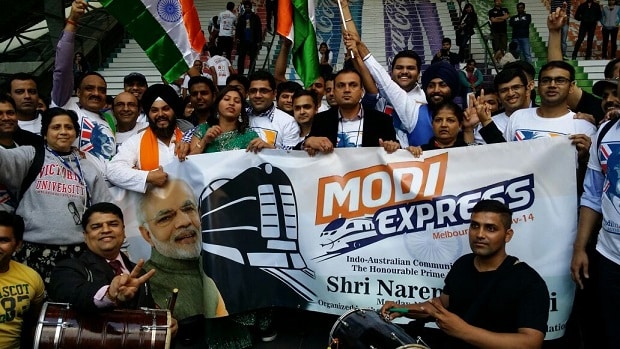 The Modi Express was a train journey with a twist

Delhi ho ya Ahmedabad, Narendra Modi Zindabad chanted the people aboard the famous ‘Modi Express’ as it trundled towards Sydney to afford a rousing welcome to Indian Prime Minister Narendra Modi.

Decorated with garlands and festoons, draped in Indian colours, the Modi Express transported 220 passengers to Sydney to witness a historic address by the Indian Prime Minister at the Allphones Arena.

Much has been said and written about the train that was flagged off, amidst great ceremony by Victorian Multicultural Minister Matthew Guy, from Melbourne’s Southern Cross Station.

In an attempt to capture the mood and excitement, we spoke to some passengers about their experience on the Modi Express.

Dharmendra Patel from Ahmedabad was one of the supporters on board the train. “The crowd was exultant from the moment we left Melbourne. No one would have slept for more than a couple of hours as we danced and sang through the entire trip,’ Patel said.

“There were arrangements for dhol and other musical instruments and an enormous amount of talent to keep the entertainment going,” he continued. “I am a big fan of Prime Minister Modi and so were a lot of other people that I met on the journey. Our common respect for him created the foundation for new friendships as we exchanged contacts and made promises to keep in touch.”

According to Patel, who is the Managing Director of Aussizz Group, the Modi Express added great weight to the welcome that the Indian Australian community wished to offer to the Indian Prime Minister.

Aloke Kumar from Mumbai Spices provided the catering for the trip. “It was in honour for us to be involved in any way with this experience of a life time,” Kumar said. “We wished to pay tribute to the Prime Minister by offering food of his choice. Vegetarian food was provided including vada pao, vegetable biryani, paneer makhani, salad and gulab jamun. For breakfast we had Khaman Dhokla. We also got special packaging created for the Modi Express.”

Kumar continued, “We were so proud to be on that train. It was wonderful to see so many people come together for the same cause.”

The train’s journey was a symbolic tribute to PM Modi’s humble beginnings as a tea vendor at a railway station, Kumar said. It also reflected on the Indian diaspora’s love for the Prime Minister.

Molina Asthana, Principal Solicitor at the Victorian Government’s Solicitor’s Officer agreed. “It was an interesting experience and it was good to be part of the euphoria and connect with like minded people,” she said.

“The journey reminded me of the train trips in India that involved food, family, friends and lots of fun. I particularly enjoyed the discussions we had on India and its future as well as the singing and dancing all the way,” Asthana continued. “Whilst there was no official welcome party for us when we arrived in Sydney we received a lot of media attention and it was good to be involved with something so big.”

Sharing her experience of the expedition, Monica Raizada from Ramon Consulting and Financial Services said, ” It was a very well organized event by the Overseas Friends of BJP Australia (OFBJP) with positive energy all round in support of a good leader.”

According to Raizada, the trip was like being part of an Indian wedding procession (baraat) with endless good food and non-stop entertainment.

“While the trip was lots of fun there was also a sense of community interest, with talks on how the community can make a difference under an inspiring leader,” Raizada continued. “Prime Minister Modi has made a difference with his new government and clean up campaigns offering great hope to India. He has also been instrumental in creating a better relationship with Australia and other parts of the world. It was a delight to be part of his welcome to Australia.”