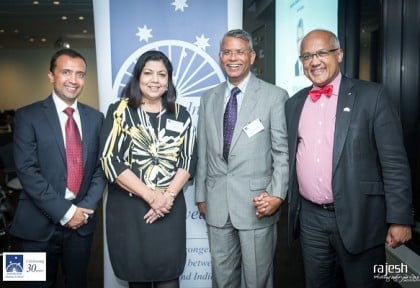 Erudite. Gentle. Even spiritual.
These were qualities with which the new Indian High Commissioner to Australia Dr AM Gondane reached out to the Indian community in Sydney recently.
He was the special guest at a welcome event organised by the Australia India Business Council early this month.

Although the High Commissioner has been out and about since he took office in December last year, the event marked the first official welcome within the Indian community in Sydney.
Some 150 people, mostly members of the AIBC and community personalities, were present at the event.
Dr Gondane, a sociologist by training, has had a successful career in diplomacy that has taken him to some of the world’s hotspots such as Syria and Papua New Guinea as well as centres of international affairs such as New York. But it is clear that he is particularly happy to be in Australia.
“My role requires me to immerse myself into the skin of the hosts,” he said at the event. “Australians are happy, dynamic people who are eager to share, and I am looking forward to making my contribution to the Australia-India relationship. Every relationship has its ebbs and flows, and this particular relationship is currently on the rise.”
He said that he would look to the expertise within the business community to help him further the relationship.


But he had a special missive for them. For people whose banter is typically littered with terms like ‘economic superpower’, ‘rising middle class hungry for consumption’ and ‘Make in India’, Dr Gondane brought the point home about ground realities.
“You may have heard large numbers,” he told his captive audience, “But India is a small economy, and a big nation. Not even a miniscule proportion of my people are like the people you have interacted with. We are home to a large number of poor who can’t afford basic health and education. We bear the responsibility of overcoming these problems.”
And yet, he pointed out, we have managed to clear various stumbling blocks.
“We’ve got over the food hump,” he noted. “Our large stocks now feed our neighbours. We’ve reached the 80 per cent point in literacy, and higher in numeracy – even our illiterates are now punching numbers into their mobile phones. Other problems will be gotten over too. We’ve demonstrated that we have a huge capacity to work our way up in the world.”

He ended by reiterating, “The slow and steady ‘Hindu rate of growth’ of the ‘60s is now long passed, and we have had a good run since. We will consolidate. We remember PL 480, and we will pay back in full measure.”
The occasion offered AIBC Chair Sheba Nandkeolyar an opportunity to highlight the Council’s activities since she took over as Chair. The national conference organised with the AFR, the representations to Vibrant Gujarat and significant interactions at last month’s Pravasi Bharatiya conference in India, found mention in her address.
Barry O’Farrell, Special NSW Trade Envoy to India, extended his own welcome to the new High Commissioner.
“I’m sure Dr Gondane will feel at home here in Sydney,” he said. “We have Bangalore traffic, Mumbai house prices and Delhi bureaucracy.”
Having just returned from India, his second trip there in recent months, he offered his take on the situation there. “I was in India at the height of the demonetisation drive, and everyone I spoke with – the taxi drivers, the hotel staff, the business community – felt it was a good move, the inconvenience notwithstanding.”

He also had a special word about India’s Prime Minister. “Mr Modi wants to make real reform, and communicates the reasons to the people, something our national leaders seem to have forgotten.”
“India can be a hard nut to crack,” he concluded to his audience, who probably know this too well. “But most things are about successive meetings.”
The occasion also gave Gunjan Pagare of the Commonwealth Bank, AIBC’s Platinum sponsor, a chance to tell the community and the new High Commissioner about the bank’s reach within the Indian and broader diverse community. The event was held at the Bank’s offices in Sussex Street.
Will the triumvirate of new High Commissioner, new AIBC Chair and new Trade Envoy help boost the stagnating trade relationship between India and Australia? Time will tell.
- Advertisement -
Share
WhatsApp
Facebook
Twitter
Linkedin
Previous articleBecause it’s fun
Next articleBanana-rama!