Aerobics of body and mind 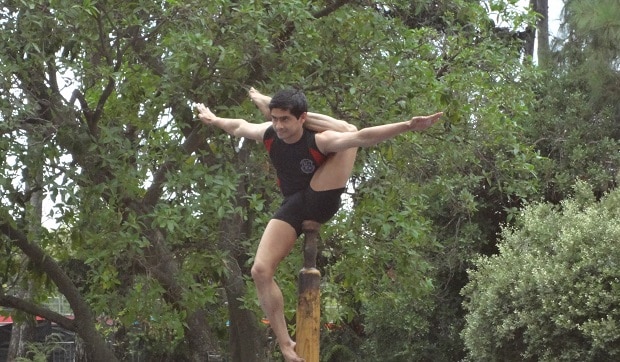 Reading Time: 3 minutesThe art of mallakhamb was displayed with skill and fervour by the only Indian participants at WOMAD

Right from the inaugural event in 1992, WOMADelaide – an open air festival of world music and dance – has always had one or two major artistes from India.  Some of the participants in the past included such notables as Amjad Ali Khan, Asha Bhonsle, N Ramani, L Subramaniam, Mandolin Srinivas, Rajendra Prasanna, Sudha Ragunathan and Zakir Hussain. Ravi Shankar came twice, the second time with his daughter Anoushka Shankar, as did Manjiri Kelkar.

Starting as a biennial weekend extravaganza, WOMAD has grown into an annual four-day event attracting around 90,000 people. It features dozens of bands and groups, comprising three to four hundred performers in all. And yet it was surprising that there was no major Indian performer at this year’s festival that concluded on March 10. However there was a different and interesting contribution in the form of gymnastic feats; ‘mallakhamb’ performed by members of the Pune Sports Academy. A team of seven comprising of three girls and two boys accompanied by two trainer/coaches, displayed amazing skills thrice a day in 20-minute long spells, to a spellbound audience. The only equipment they needed was a ten-foot tall round wooden pole of 10inch diameter and a pair of 20ft long thick ropes hung from steel scaffolding.

On the wooden pole, the young gymnasts wrapped themselves around like rubber dolls, slithered like snakes, horizontally stretched out at a perpendicular angle and stood vertical, like an extension of the pole. Two girls in their twenties and one in her early teens took the proverbial Indian rope trick to new heights. With lightning movements of their nimble limbs they managed to sit cross-legged in mid-air, suspend their bodies in levitation mode and perform some gravity defying feats, including a few yogasanasas. After their individual performances, they did a synchronised show as well. There was a large admiring audience for every one of their shows.

Omkar Paranjape, a senior member of the team, told the Indian Link that the main objective of their participation at WOMAD was to make people outside India aware of their training methods to keep the mind agile and the body supple, slim and strong. “Unlike the modern gym that requires a lot of latest gadgets, ‘mallakhamb’ is the most inexpensive and natural form of exercise without the need for any equipment. It is a unique combination of meditation and gymnastics. The twisting and turning around the pole massages the whole body and the gravity-defying feats help blood circulation”, explained Paranjape.

“Currently the Pune Sports Academy has over sixty trainees. The earliest one can start is from the age of six. While it takes considerable training time to reach the level of the performers on this show, overseas visitors can spend a couple of weeks at our Academy to learn a few exercises to keep their body fit and flexible”, he added. This may be a good opportunity for some of those with beer guts to return from an Indian holiday with a body well conditioned and a mind well tuned.

The Indian presence was felt in a big way with the announcement of a $400,000 private donation, the largest ever received by WOMADelaide, by Dr Mohindar Dhillon and his Natraj Cultural Foundation of Melbourne. His gift will ensure the continued presence of Indian classical artistes at this festival, which has been a tradition since its inception.