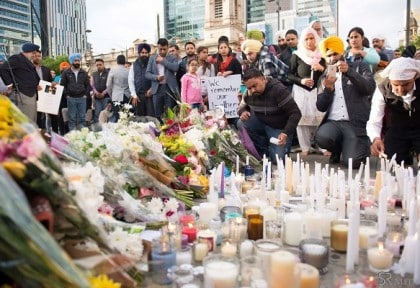 The community gathers in a spontaneous display of grief

A gathering of more than 600 people brought flowers and candles as a spontaneous gesture of grief, dismay and loss at the horrific killing of Manmeet Alisher. It took place in the heart of Adelaide’s central square, Tandanyunga (formerly known as Victoria Square). Surrounded by the constant stream of trams and buses, it seemed fitting to honour Manmeet at the most prominent public place in Adelaide.

The gathering was addressed by Transport Minister Stephen Mulligan, Minster for Multicultural Affairs Zoe Bettison, and Federal MP Steve Georganas who expressed their sorrow and support.
Greens Senator Sarah Hanson-Young praised the South Sudanese-Australian man Aguek Nyok who heroically broke open the bus to save the other passengers. The crowd then heard from South Australian MLA Tung Ngo, the Lord Mayor of Adelaide Martin Haese, and Secretary of the TWU Ian Smith. Local friend of Manmeet, Mintu Brar read a personal message and then a short message of thanks from Manmeet’s brother, Amit Sharma.

Organisers then invited the crowd to sit during a 30 minute kirtan program. Only then could the size of the crowd be seen. It was very moving to see such a huge gathering of people – South Asian, African, European and Asian Australians – seated in solidarity, in sorrow, and united in thought and intention, as Adelaide workers passed by and joined in.
A long line of people continued to place bunch after bunch of flowers and light hundreds of candles, continuing well after the last speakers, MLA Russell Wortley, Manmeet’s cousin from Adelaide, Himanshu Sharma, and a representative of a bus company. Channel 7 did a live cross from the gathering and many other media outlets were also present. Apologies were heard from Senator Penny Wong and Governor of South Australia Hieu Van Le.

It was curious to note there was no representation from the Liberal Party until much later in the evening, and no speeches. When questioned a spokesperson from the organisers said, “This is no accident. When a community is reeling after what everyone feels is a hate crime, you can’t stomach hearing from people who side with those who make hate speeches.”
Referring to the incident of Tony Abbott posing with One Nation Senator Pauline Hanson, and Minister for Women Michaelia Cash hugging Hanson after her maiden speech in parliament, the organiser said, “These people are the ones who exacerbate division and paranoia, so no, sorry, we are not going to have members of the Liberal Party here saying they deplore hate crimes while posing with the haters. They (the Liberals) can’t have it both ways. They have to work harder to bring people together and their treatment of migrants as cash cows is currently deplorable.”
The tenor of the gathering was peaceful, dignified and organised.  People stayed on afterwards for some time; to weep, talk and support each other.
After everyone had gone, the candles and flowers and photos and messages remained. Some hours later, the candles still burnt brightly in the cold night and passers-by stopped to reflect.
A homeless man had set up his bed next to the warmth of the fire; or perhaps it was the warmth of an outpouring of love in a harsh world.
Photos: Saravanan Ravichandran. SR media.