Adani will be a win for Australia: Rashi Kapoor 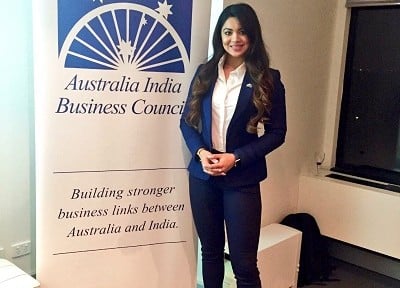 Incoming President Rashi Kapoor, the first woman and the youngest person to head the Australia India Business Council (AIBC) Victoria Chapter, is keen for the Carmichael Coal Mine and Rail Project to succeed

AIBC (Vic) underwent a change in leadership recently, presenting a fresh and youthful look. New President Rashi Kapoor speaks with Indian Link on what she hopes to bring to her new role.
On the recent AIBC elections
The election was held on 22 May 2017 with nine committee members from the AIBC Victorian chapter.
Sheba Nandkeolyar, National Chair AIBC, was also present at the meeting. John Cox, AIBC National Chapter’s Company Secretary, conducted the elections over the phone.

There were two contenders for the role of President and a ballot was conducted. The result was in my favour and I was elected as the President of the Victorian chapter
I was initially planning to stand for Vice President but everyone encouraged me to nominate for the role of the President, as they wanted a generational change.
I decided to give it a go and I was delighted to be chosen to lead an eminent organisation like AIBC.
On her qualifications
People have only seen the glamorous side of me, they don’t know who I truly am.
They don’t know that I am a Monash Graduate with a degree in Accounting and Finance and I work as a qualified Finance Officer.
I am also the Creative Director of Fitness World, India’s leading fitness equipment company, an ambassador for Cricket Australia, member of AFL focus group and I belong to a business family. (Rashi’s father Dr Dinesh Kapoor is the Managing Director of Indian Juniors Premier League IJPL T20)
People only associate me with glamour and fashion that, in reality, is just a weekend activity for me.
On being a young leader
I believe oops is better than I wish.
When you don’t have much experience you are more charged to try new things.
People like Stephen Manallack (former AIBC President) have already set the ground for us, it’s time for us to take it forward with enthusiasm.
I am looking forward to learning from the wisdom of those who have the experience. There are many people who will guide my path.
I am really excited for the future. The new AIBC team is largely young, and the others are youthful, so that’s a balance that we are trying to maintain.
On energising subscriptions and creating wider exposure for AIBC
I am very well connected with small and medium businesses. I want to create an umbrella under which everyone can participate.
Social media is a great platform and I will use that as a tool to promote AIBC and get more students and young professionals on board.

The strategy is to grow the membership, get more people involved and have the entire community to connect.
Just getting that large network going will be an achievement in itself.
On opportunities beyond Curry, Cricket and Commonwealth in terms of the Australia-India relationship
There are many talks underway on the proposed free trade agreement between India and Australia. We, at AIBC, can find ways and means to expedite it.
The plan is to promote trade and cultural exchange by appointing a few heads for different industries. They can target their industries and attract more people and better engagement.
On why trade between Australia and India is stagnant and not moving beyond the $15 billion mark
There are a lot of barriers that are stalling the progress of trade initiatives between the two countries and I am still learning about them.
We intend to have few focus groups to understand these issues better.
We also intend to seek advice from DFAT and Austrade to see how we can conquer these challenges.
On whether there is enough urgency on the part of Australia to take relationships between the two countries further
Australia cannot ignore the world’s largest democracy.
India has a very young population as compared to other countries. The median average age in India is 27, that is 10 years younger than that of China and 20 years younger than Japan.
India has the youth, the manpower as well as various hubs of progressive industries.
Everybody has eyes on India at the moment and it’s the right time for Australia to collaborate with India and build strategic partnerships.
On who, out of the current crop of Australian politicians, could be looking at working with India? (Andrew Robb, former Minister for Trade and Investment, who worked closely with India, left Parliament a year ago and this position of special envoy has not been filled)

Andrew Robb did a remarkable job when he was the Minister for Trade and Investment. I was part of the dialogue that he held with India, last year, and there was a lot happening during his time.
Things, however, do seem to be a bit stagnant at the moment and that needs to change with the right person in the lead.
Although former Victorian Premier Ted Baillieu has left Parliament he has maintained really good relationships with India and the Indian Government.
He has done much groundwork and taken the lead in creating greater ties between the two countries whether it’s through spirituality, politics or business.
Ted is inspirational and would be the ideal candidate to lead the Australian Indian engagement further.
On her position regarding the recent changes to 457 visas
I am still to make up my mind on this as I am listening to both sides of the story.
It’s a good thing to employ Australians, however you cannot ignore the skills that people bring from another country.
Coming from an Indian heritage I would want more skilled people to develop the country I am currently living in.
The decision, however, should be based on people’s employability and skills. There should be no discrimination due to their background or country of origin.
With the new changes the Government has overlooked the repercussions for people who have already applied for the visas and their families that were so hopeful.
On her views on the Adani mines and whether they should get funding from the Australian Government
The Carmichael coal, railway and port project will bring lots of job opportunities. It will create more wealth, generate taxes and royalties and it will be a win for Australia.
By funding them, the Government will have more role to play and by working together they will have more control over the functioning of the mine. I think they should definitely work together.

It is an investment in the country and the foreign ownership of it should not be a deterrent.
Take for example the mines owned by Indian steel magnate and Parliamentarian Naveen Jindal. They are value creators and doing well in Australia.

On how she will resolve the conflicts that exist within AIBC
What’s happened in the past is staying in the past for a reason. We can only learn from experience and that’s why we have historical data in accounting.
When you are so engaged in making a positive change, then conflicts and negativity do not affect you. You move ahead with positive energy, focus and determination.
The AIBC team is fresh and it has lots to offer and look forward to.
On how she proposes to bring momentum to AIBC Victorian Chapter
In Victoria we have just re-established ourselves with this change in leadership. We have been given this opportunity recently and our work has just started. Hopefully within a year you will have a different opinion.
Our strategies of involving more people and exploring more business opportunities will definitely bear results. With the support of the community, the Indian diaspora and our vision, we are sure to succeed.
AIBC is a not for profit organisation established to strengthen bonds and build relationships between India and Australia through promotion of trade dialogue, bilateral business engagement and wide-ranging cooperation.