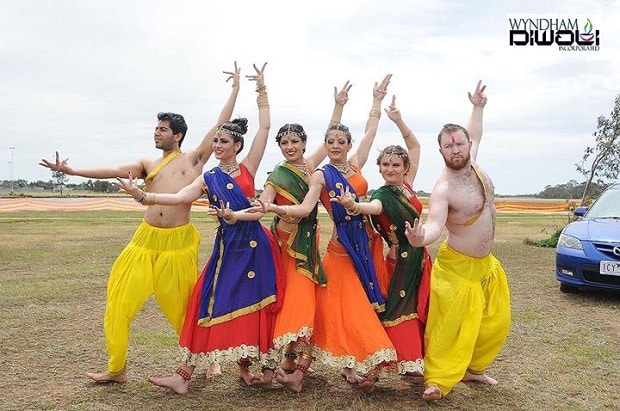 Wyndham Diwali was nothing short of a carnival as up to 20,000 people gathered at President’s Park in Wyndham Vale, near Werribee, to celebrate the Indian festival of lights. Thanks to daylight saving, the sun shone bright late into the evening, before the festive lights and traditional lamps lit up the vast grounds.

Wyndham Diwali scaled greater heights this year as innumerable people from across Victoria, and all parts of the world, came together – paving the way for a union of cultures. Whilst the crowd was predominantly Indian, there were also people from Pakistani, Bangladeshi, Sri Lankan, Somalian, Maori, Italian, Russian and Australian backgrounds.

After a prayer to Lord Ganesha, the day-long mela included an artistic program filled with high magnitude performances and inventively choreographed dances with dazzling, colourful costumes.

The festival organisers, Wyndham Diwali Inc, believe in promoting unity through cultural partnerships and exchanging traditions. At this Diwali festival, using the medium of performing arts, more than 235 participants came together to promote the theme of ‘Many cultures, one nation’.

The atmosphere came alive as hit songs from Indian movies played loudly in the background. Some amazing performances on stage added to the ambience. The cultural presentation included Indian classical, regional folk and Bollywood dancing as well as a fashion parade attended by well-known models and contest winners including Miss India Australia and Miss World Australia.

Another festival favourite was local rock band The Fifths, who regaled the audience with a modern take on old classic Indian songs. The leading performance this year was the Ramayana ballet based on the theme of the festival.

Other performances included a traditional ethnic Maori group, a Tongan group, a versatile Russian group and the Dinka African group, Bollywood dancing by Rachana Natyalaya, Shiamak, Jalwa dance company and many talented others.

Vibrant attire was the norm as people came dressed up for a day out. With multiple stalls selling clothing, jewellery and handicrafts, the women got to pamper themselves with shopping and applying intricate henna designs on their palms.

Many visitors chose to enjoy the variety of Indian food on offer as there were several stalls serving mouth-watering Indian delicacies. The kid’s activity area proved quite popular as children made a beeline for the slides and rides.

The Office of Multicultural Affairs and Citizenship was a principal sponsor of the Festival, and Victorian Multicultural Commission Chidambaram Srinivasan addressed the gathering and extended the Commission’s support to the WDI team.

Promising to come back with a bigger bang next year, Diwali at Wyndham ended with fireworks that decorated the sky with different colours. In the midst of an authentic mela atmosphere, the sparkling pyrotechnics display heralded a new ray of hope and light for the future.