A win for IFFM 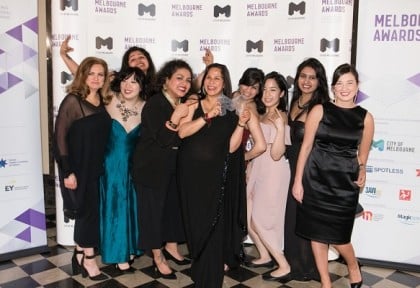 The Melbourne Awards celebrate significant contributions in the areas of environmental sustainability, community, multiculturalism and strengthening Melbourne’s profile. IFFM is an initiative of the Victorian Government that aims to strengthen the ties between the Indian film industry and Victoria.

In a recent announcement by the Andrews Labor Government it was confirmed that the festival has been locked in till 2018.
IFFM went up against Crown and Melbourne Museum in contention for the award.
Indian Link’s Preeti Jabbal spoke to Mitu Bhowmick Lange, Festival Director of IFFM, about the win.
“We were the finalists last year and thrilled to be finalists again this year,” Bhowmick Lange said. “It was very exciting, but I was aware that we were the complete underdogs and was really praying for a win. When Lord Mayor Robert Doyle announced our name I thought my heart was going to burst with happiness and pride. Our whole team was there and we just couldn’t stop cheering and clapping with pure joy. It was really a wonderful evening that I will cherish all my life.”
From the beginning IFFM has been about celebrating diversity and embracing everyone who loves films and culture.
“The fact that we have so many Indians, Australians and people from all ethnicities participating in our festival is our greatest reward,” Mitu Bhowmick Lange said. “Events like this help in a better understanding and appreciation of other cultures.”

The Festival gets much press and media coverage in India which in turn helps create a stronger brand for Melbourne.
As Bhowmick Lange said, “Arts and cinema are the greatest cultural bridge and our festival truly represents that.”
Speaking about what drives her in the role of IFFM Festival Director, Bhowmick Lange said, “I cherish all the wonderful relationships, the words of appreciations and the criticisms, that are not clouded by ego or madness, that come with the festival.”
She also shared her top five wonderful moments:
“When we danced our way into the Guinness Book of World records as the Largest Bollywood Dance Class in 2011.
When Mr Amitabh Bachchan was in Melbourne and we had our inaugural IFFM Awards night at Princess theatre, we all got up to take a selfie with the audience. There was such love in the room and such wonderful energy when I looked up from the stage I still remember that moment.
When our beautiful brand ambassador Vidya Balan launched the Festival’s Educate the Educators initiative this year. The initiative supports teachers in India who work with special needs children by the Australian educators. The cause is very close to our hearts and we were all very emotional to announce the first team of educators who were going to India to work with Indian teachers.
When Mr Anil Kapoor hoisted the Indian national flag at Melbourne ‘s pulse point – Federation Square. I was choked with emotion when he cried “Jai Hind!”  and thousands cheered along with him.
And of course winning the Melbourne Awards has been one of our proudest moments.”

When asked what winning the award means personally and professionally, Bhowmick Lange was contemplative.
“Professionally it is a huge boost for the festival profile, especially among the sponsors and corporates. It’s a huge recognition and an encouragement for the team to work even harder. Personally, I feel a great sense of achievement. When I first moved to Melbourne I had no friends, no money, no job. And to win the Melbourne Award after twelve years is a testament to Melbourne’s big heart and multicultural spirit.”
The biggest challenges in any industry are remaining relevant and constantly evolving with the needs of an audience.
“Our biggest challenge is always to ensure we are constantly growing and doing new things within the format of a film festival,” Bhowmick Lange said. “The future is very exciting! We will continue to showcase the best of Indian cinema and cinema from the sub-continent and provide a platform to young filmmakers and dancers for their talents. We have also slowly started co-producing films. Our first film was a documentary, Raising the Bar, that premiered at our festival, and we will continue to do that. We have also launched the charity initiative Educate the Educators which we plan to grow. There is a lot to do and plan and many wonderful ideas that we hope to explore and work on as the festival grows.”