A voice worth listening to 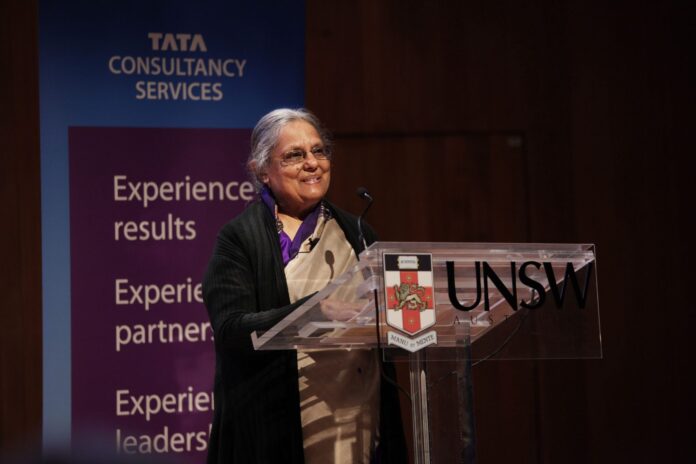 Like many Indian households, my childhood one had a photo of Mahatma Gandhi displayed prominently. My achachan (grandfather) shared memories of the time when Gandhi was alive and acting as a force of hope for a country struggling to be born.
It is in memory of that aura that I attended a talk by Mahatma Gandhi’s granddaughter, Ela Gandhi, at the University of New South Wales (UNSW) on the last Friday of January. I arrived at the talk knowing little about Ms Gandhi or her work. It soon became apparent that her grandparents are not what sets her apart as a voice worth listening to.
Ela Gandhi spent her life as a prominent anti-apartheid activist in South Africa, served in the South African parliament for a decade, founded the International Centre on Non-Violence (ICON) and continues to be a firm champion of women’s rights and advocate of non-violence education.
The talk was hosted by Professor Fred Hilmer, as his last official act as Vice-Chancellor of UNSW, and Dr Neville Roach AO, patron of the Australia India Institute at UNSW. It was this year’s instalment of the annual Gandhi Oration hosted at the University.With hundreds of people attending to hear Ms Ela Gandhi speak, the evening succeeded in promoting thought and reflection on the ideals of Mahatma Gandhi. The talk was preceded by a Remembrance Ceremony on the lawns of the University campus, alongside the busts of Mahatma Gandhi and Nelson Mandela.

Ela Gandhi emphasised the virtues of non-violence and the importance of early childhood education. Speaking with a quiet voice which nonetheless commanded attention, she reminded the audience of the work left to be done in freeing people from fear and conflict.
One in three women globally are victims of domestic violence, universal early-childhood education is yet to be achieved, and conflicts still rage (even as peace and cooperation have become the norm rather than the exception, as was true for much of history).
Where her arguments or oratory left you unconvinced – as when she used the over prescription of antibiotics as an allegory for the futility of conflict – or where it became tempting to dismiss the virtues she preached as just platitudes, the example of Ela Gandhi’s life reminded you of the sincerity and power of her message.
When it came time for questions (from Professor Hilmer, Dr Roach, and the audience), many people were curious to know more about her interactions with Nelson Mandela and her grandfather. One of her most significant lessons from their influence, she said, was of the human capacity to change. In both Madiba and the Mahatma, she saw people who recognised their ability to keep learning and keep changing. In this goal of self-development she also saw a common point between all religions.

Great names who have passed into history often appear to us to have transcended politics. The Lincoln of American memory is not the politicking, media manipulating Lincoln of American history. The Mandela of global imagination is not the militant agitator of global history. The Gandhi of Indian nationalist myth is not the fallible political organiser of Indian reality.
An interesting reminder of this fallacy came when an audience member asked if Mohandas Gandhi would have had a Facebook account. Ms Gandhi reflected on her grandfather’s ability to build large scale social movements and organise national events (such as the Salt March) in an age before social media, before speculating that yes, Gandhi would most likely have had a Facebook account, and would have used it well to have his message reach as many people as possible.
As inspiring as it was to spend an evening reflecting on grand ideals, it was also nice to be reminded that these great souls of history are not inevitable heroes. Their achievement was not a superhuman purity of virtue, but rather it was a lifetime of sustained effort through whatever mechanism of politics and social change was available to them.
Ms Ela Gandhi’s life follows in that mould of heroism. There can be no questioning her sacrifices. One of her sons died during the anti-apartheid struggle, and she spent a total of nine years under house arrest during the rule of the South African regime of the time. And, on that Friday night at UNSW, she continued her mission by speaking with conviction about the values that have illuminated her life.