A Telengana twist at Ganesha fest 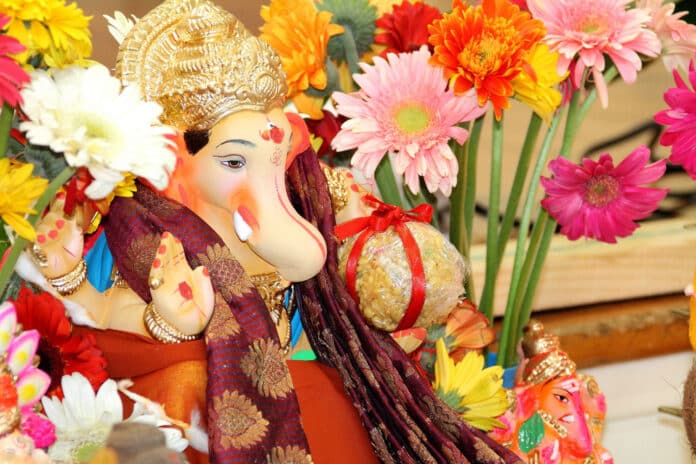 More than 250 people gathered in a Girraween celebration of Ganeshotsav organised by the Australian Telengana Forum in end September. The elephant-headed pot-bellied god of good beginnings, the remover of obstacles, was felicitated by the Telugu community of Western Sydney at the event. They were joined also by a sizable number of mainstream Australians, in a wonderful spirit of multiculturalism.
Priest Phanindra Sharma performed a two-hour prayer ceremony as guests walked in and paid obeisance. Children received a pooja pen each from the priest, besides of course the special prasad on the occasion. A cultural program followed, the highlight being Taruni’s classical dance.
Earlier some twenty kids had participated in a clay Ganesh idol making activity, with prizes going out for the best creations.
The fun-loving Ganesha is one of the most loved among the pantheon of Hindu gods. His particular love of sweet laddoos makes the food item a must at this event, even considered auspicious. In a wonderful Telengana twist, the traditional ‘laddoo auction’ was performed at the Girraween celebration. Vani Elete organised the auction, which started modestly at $50 but soon crossed last year’s record of $350, and with much excitement and fanfare, ended up at $700, the victorious bidders being Abhilash Reddy and team, who broke into chants of “Jai bolo Ganesh maharaj ki jai!”
ATF President Upender Gadey ably led his executive committee team in organising the event. General Secretary Venkata Prasad Ragipani was pleased at having shared this ancient Indian tradition with local Australians.


Ganesha comes to Sydney’s north shore
The Ganesh festival was held at the community level for the first time at Hornsby this year. Led by the Bedarkar family who are well-known for recreating the spirit of the iconic festival, the event saw some 200 people gather at Asquith Community Centre. They offered joint prayers to Ganesha, the God of Good Beginnings and the Remover of Obstacles.
The priest Sriparashara Hrishikesha Bhatt performed the rituals in Sanskrit, translating as best as he could in English while also elaborating, and got the crowd to repeat after him at significant points. The clay idol of Ganesh sat in all its glory on a raised platform, as Shailendra and Rashmi Bedarkar took turns to offer, on behalf of all present, the ritual druva glass blades, red flowers, coconut, modak and chandan sandalwood paste.
The crowd chanted together the 108 salutations dedicated to Lord Ganesha, and the singing of the Ganesh Aarti reverberated in the hall.
For Shai and Rashmi, the Marathi tradition of Ganeshutsav has been a labour of love. An annual event at their home, they prepare for the ten-day celebration months in advance, painstakingly sculpting their idol of Ganesha and decorating it with a particular creative theme each year (Ashta Vinayaka, the twelve chakras, lotus, swan, and muladhara being a few).
Their festivities began to attract such numbers each year that this year it simply had to take on a public form. There is no doubt that it will become an annual community celebration from here on.
“Our aim was always to recreate the passion and fervour of the celebrations in Mumbai, for our kids here”, Shai told Indian Link.
He certainly seems to have succeeded, as he pointed out that evening, in the case of young Roma Kore. She first came to their Ganesh festival ten years ago as a baby in her mother’s arms. She returned, quite like Ganesh himself, each year, and this time round, presented a dance item as a confident and beautiful eleven-year-old.
Besides the pooja and cultural items, friends and family chipped in to create a mela feel – with stalls offering food and mehendi and other services.

Iconic festival brings communities together
It’s traditional pomp, splendour and fanfare at SVT’s Ganesh Chaturthi celebrations Sydneysiders ushered in the season of festivities recently with grand Ganesh Chathurthi celebrations at the Sri Venkateshwara Temple (SVT) in Helensburgh. Marked by day-long events, SVT’s Ganesh Visarjan festival draws Hindu devotees of diverse ethnicity and ancestry (and more recently non-Hindu, but no less enthusiastic onlookers) by the thousands.
In recent years, Hindus not merely from India and Sri Lanka, but those from Nepal, Fiji, Malaysia, Singapore and South Africa have been actively involved in the celebrations. The temple committee is now determined to reach out to Hindu brethren of Bhutanese, Thai and Cambodian heritage as well.
Significantly, talks are currently in progress between SVT and Wollongong Council to make the iconic festival a regional fixture. “The council wants to work closely with us to make this a regional or even a national event and create major activities around it,” temple vice president Murali Dharan told Indian Link.
Murali Dharan further indicated that the Hindu Council was liaising with all Hindu temples and associations in Sydney to bring them together for Ganesh Visarjan.
Celebrations this year were extra special as the event coincided with the annual Brahmotsavam. The sprawling temple complex was packed to capacity, with crowds peaking at midday. Whether it was supervising transport arrangements, directing traffic, cooking sumptuous meals or manning queues at the canteen, SVT’s dedicated army of volunteers were on their toes, coordinating the whole exercise without a glitch. Be it veteran committee members or new recruits, service with a smile was the recurring motto.
As is customary, the Chathurthi celebrations began with Trisathi homam, abhishekam, alankaaram and deeparadhana for both the moolavar and utsavar at Siva complex. In keeping with the custom of many decades, SVT president Dr Kanag Baska’s handmade Ganesha held pride of place as thousands paid homage to the God of good beginnings. A number of clay creations made lovingly by devotees young and old, shared the centre-stage. Amidst chanting, the idols were then taken in a grand procession around the temple, as bhaktas vied with each other for the privilege of carrying the divine burden. The whole temple was decorated with elaborate thoranams, pandals and intricate flower arrangements, with the best naturally reserved for the deity.
The occasion was as much social, as religious. Outside the praahaaram, the newly erected canopy served as a perfect backdrop for the daylong cultural showcase. Carnatic renditions, bhajans, Bharatanatyam performances both group and solo, kept the milling crowds entertained. Dedicated volunteers engaged young children with clay modelling and decorating workshops.
An absolute stand out was the community kitchen, which has always been a great draw card. It is to the temple committee’s credit that parallel annadhaanam and canteen lines were simultaneously catered for. The maanga saadham (mango rice) was a great crowd pleaser while masala dosai fans tucked into their all-time favourite. Crunchy ulundu vadais, fluffy idlis, rotti parathas and SVT canteen staples – mixture, laddu and jangiri were also on the menu. Sydney Ayyappa Samaj volunteers doled out endless cups of delicious neeru moru (spicy buttermilk made with a secret recipe apparently). The specially erected pandals offered devotees the perfect venue for relaxed outdoor feasting.
It was time for the much-awaited segment – the final procession to Stanwell Beach. Each year the ‘Bambaiyya’ style procession gets bigger and better as the favourite Hindu god is farewelled amidst chiming of bells, blowing of trumpets and beating of drums by devotees. This year the Marathi community provided a welcome addition – a traditional percussion band that has already wowed audiences at the Australia India Fair. As the high intensity group unveiled their repertoire, the crowds broke into spontaneous dance. What a feast for the senses; it was a time to forget life’s unending worries and surrender to call of the divine!
It may be recalled that the tradition of communal celebrations was first started by Lokmanya Tilak to awaken the spirit of nationalism among Hindus and unite the community. Despite surging costs, safety issues and increasing pressure on crowd and traffic management, this concept is hugely popular back home. It is little wonder that this age old tradition is bonding the extended Hindu community here in Sydney. If talks with Wollongong Council eventuate into positive action, the Ganesh Visarjan festival may well become an integral fixture of the region and a testimonial to the vibrant multiculturalism in Australia.
By USHA RAMANUJAM ARVIND


In variance with the South Indian tradition, in North India Ganesha is often shown married to the two daughters of Brahma (the Lord of Creation), namely Buddhi and Siddhi. Metaphorically Buddhi signifies wisdom and Siddhi, achievement. In the sense of yoga, Buddhi and Siddhi represent the female and male currents in the human body. In visual arts this aspect of Ganesha is represented with grace and charm.
Likewise, no analysis of Lord Ganesha can be concluded without a mention of the mystical syllable Om – the most powerful universal symbol of the divine presence in Hindu thought. The written manifestation of this divine symbol when inverted gives the perfect profile of the god with the elephant head.
By USHA RAMANUJAM ARVIND