A spiritual odyssey in the footsteps of our seers 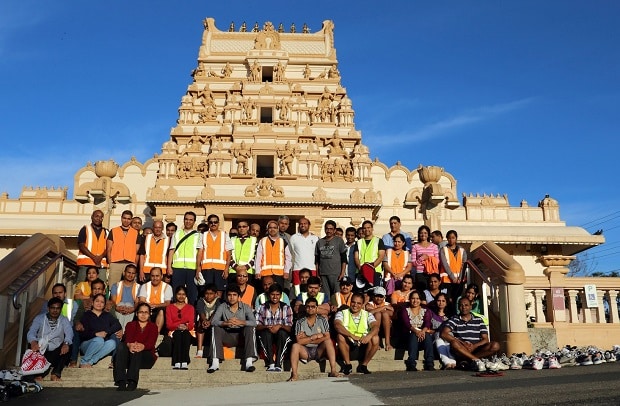 Reading Time: 4 minutesParticipants in the paadayatra embark on a successful journey of personal and spiritual achievement


At the crack of dawn when most Sydneysiders were probably snuggled under their cosy doona or recovering from the Friday night hangover, a young lad stood patiently on the footsteps of Murugan Temple at Westmead. The only other soul in sight was the temple priest, getting ready for the morning abhishekam.
Twenty minutes later, organisers appeared on the scene, bustling about in preparation for a big day ahead. Participants slowly started trickling in and by 6am, a sizeable crowd had gathered, a motley bunch of young and old, all sporting fluorescent vests, with anticipation in their eyes.
If there was any trepidation, they certainly didn’t show it. But then, they were in good hands and they knew it. Invoking Ganesha, the God of good beginnings and Tirupati Balaji, the group started out on the paadayatra.
The Westmead to Helensburgh paadayatra has now officially become part of Sydney Hindu calendar and an integral feature of October long weekend. Personally rewarding, paadayaatra is a spiritual journey on foot undertaken by the devout, as they seek to understand the special bond between man and his maker.
Commissioned in 2012 by the Hindu Council of Australia and organised by Let’s Give Hope, a Sydney based youth group, this unique event follows in the tradition of our ancient seers, who travelled from Kashi to Kanyakumari on foot, long before motorised transport and roadside motels were taken for granted. Centuries later, it was revitalised by the peace-loving Mahatma Gandhi as he single-handedly took on the British Raj.
Carefully planned and organised by Sai Paravasthu of Let’s Give Hope, the SVT paadayatra has the official support of several leading organisations including the Premier’s Office, Events NSW, RTA, police and ambulance services, as well as all the local councils along the walking trail.
Yet again, a determined group of Sydney Hindus took part in and successfully completed the gruelling journey of over 75kms from the Murugan Temple at Westmead to Sri Venkateshwara Temple at Helensburgh, visiting Shirdi Sai Mandir along the way. A number of eager devotees undertook the shorter stretch between Westmead and Sai Mandir. Building on the experiences of 2012, the team was even better prepared for eventualities. A core group of volunteers escorted the walkers, offering revival strategies.
Prior to the walk, an induction night was held for participants at Murugan Temple, briefing them extensively on the procedures. Arrangements were also in place regarding health and safety issues. All participants were previously screened and registered, with an insurance cover being provided by the Hindu Council of Australia.
While the paadayatra may seem like something of a novelty to many Indian Australians, interestingly, a close-knit group led by Wentworthville veteran Murali has been walking the same stretch for several years now. In fact, it was Murali’s 25th paadayatra last year. Sporting his trademark thongs and infectious enthusiasm, he was yet again motivating newcomers as always, giving them tips on how to cope.
Embracing sustainable values for the individual, the paadayatra is a not just a test of stamina and endurance, but also of faith. While it may be a personal milestone, it is no less a great team-building opportunity. It was therefore heartening to see a number of teens and young adults in the group, willing to give up their weekend for a wonderful cause. After all, not every lesson is learnt in the classroom.
On a larger scale, this novel initiative also sought to bring Hindu temples, missions and organisations in Sydney together as one happy family.
Singing and chanting along the way, the group walked down Parramatta Road, reaching Sai Mandir in time for aarthi. Volunteers had prepared a nourishing breakfast at the temple. Rehydrated, the yaatris now embarked on the most strenuous stretch, Strathfield to Sutherland, reaching the venue by 5pm. Overnight accommodation had been arranged for all of the walkers.
Well rested, the participants were all ready for the homestretch, departing at the crack of dawn. Enthusiastic walkers showed no tiredness from the day before, and outclassed expectations by walking briskly to the temple, reaching Lawrence Hargrave Drive before 10am.
Once the entire group had slowly gathered, the devotees walked en masse to the temple. A large welcome party awaited them, and aarti and annadhaanam followed.
Talking to Indian Link after the event, Sai Paravasthu, the event leader stated that he was very happy with the successful outcome of the 2013 paadayatra.
“I would like to congratulate all the walkers for their dedication, perseverance and patience in participating and completing the paadayatra this year,” Paravasthu stated. “We had no issues, casualties or problems (by God’s grace) and everyone enjoyed the event and hopefully rested well”.
He is particularly grateful to the volunteer teams who were at the service of walkers at all times, preparing delicious food for breakfast, lunch and dinner. “A lot of volunteer hours and effort has gone in making this event seamless and successful, and we hope to build on this for next year,” he added.
Having successfully managed two paadayatras, Paravasthu and his dedicated team would like to invite more members of the community to join this event, reinforcing age-old customs and values and making it a bigger success.