A spectacular show for Diwali 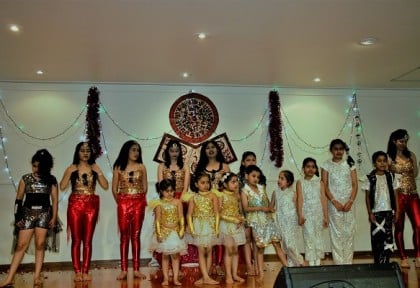 Local talents, young and old, took to the stage to perform as the Hindi Niketan Inc. Group hosted its yearly Diwali festival at Clayton Town Hall.

Families gathered, friends were made and the festival provided an opportunity for the community to celebrate the Festival of Lights with entertainment and scrumptious vegetarian food.

Diwali is a time to share, promote happiness and foster harmonious living. Dr Rahul Gupta, President of Hindi Niketan Group, noted that, “The group has been providing a platform for local artists and entertainers to shares their talents and showcase their performances.”
The colourful event attracted over 220 guests from diverse backgrounds. The festival was not purely about socialising and networking. Instead there were back-to-back performances comprising of songs, dance, musical performances, poetry, skits and a breath-taking magic show.
The children from the Just Beat It Dance Group and Sippi’s Dance Kids performed freestyle routines with relentless energy and big smiles. A guitar performance by a young student deserved commendation for his ability to play a difficult solo piece. The fusion song and dance routines were all unique and the costumes were exquisite. Superb choreography suggests that there is a lot of untapped talent in our community!
At the end of the program, a sensational magic show was performed by the great magician Moti Kshirsagar, who was supported by his wife, Neema Sagar, on stage. This was no ordinary magic show with playing cards and a top-hat. The acts included fire turning objects into other objects, birds somehow moving through perspex and water appearing out of nowhere!

City of Monash Councillor Paul Klisaris commended the participants for their efforts. He praised Hindi Niketan for their ongoing support in the Monash community and the opportunities they provide to the public to participate.
Indian Consulate Head of Chancery Rakesh Malhotra commended Hindi Niketan for its excellent efforts in promoting Indian cultural values and providing a space for the wider Victorian community to join in the festivities.
An important message came from Cr Klisaris who asked whether the Hindi Niketan Group would be willing to merge this event with other community groups. Although collaborative events do occur, they are rare.
Maybe the Victorian Indian community should host more events with other groups from different parts of the world. Federal Member for Bruce, Julian Hill explained that his electorate embraces multiculturalism with its extensively diverse constituents and inclusive values.

A collaborative initiative would serve to educate others about cultures in a fun and exciting manner. Although it is easier said than done, adults should forge relationships with members from different cultures and host programs together. The children of today need to be reminded about mixing with others. Instead of seeing the same faces at yearly events, Klisaris advocated for a joint event in the future.
Diwali is about spending time with others and making people happy. Wouldn’t it be great to share that time people you have never met? What an experience that would be!