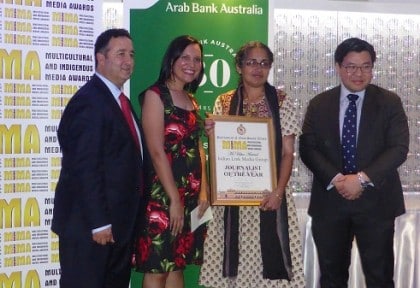 A journalist with 25 years of experience, Usha has been associated with Indian Link over the past 16 years, writing extensively for our award-winning newspaper on a broad range of issues shaping the migrant population.
As one of Indian Link’s senior most reporters, Usha has helped raise awareness on critical issues affecting the ethnic minority, and in the process, amassed an impressive portfolio of writing.
“I am deeply honoured by the recognition,” Usha said at her honour. “It has been a privilege to write for a quality publication that sets high benchmarks for itself while reaching out to such a wide audience across Australia. Over the course of this journey, I have met so many people, built such a rich network of contacts and learnt so many new things. It has been a rewarding experience and one that has helped me find my feet in a new land.”
“Through her in-depth coverage and sensitive portrayal of core migrant issues, Usha has not only presented the evolving dynamics, but also won the trust and respect of community members, thereby helping create a strong and resilient society,” Indian Link CEO Pawan Luthra said in his congratulatory note.
The seasoned writer has gained a reputation for her well-researched and analytical stories on contemporary issues.
Usha’s most acclaimed pieces in a prolific year this year, have included:
*The growth of the ‘mother tongue’ movement in NSW schools
*Writing from the Subcontinent at this year’s Sydney Writers Festival
*An analysis of the place of Indian history in the NSW history syllabus
Science communication has grown to become one of Usha’s specialities. In the last twelve months alone, she has produced informative pieces on:
*Australia’s medical cannabis trials
*A novel drug delivery system in cancer prevention pioneered by an Australian company
*A new cancer app that will aid information delivery and patient care management
*A peanut allergy breakthrough by WA scientists
*Tree-root shaped anchors being developed at Sydney Uni
*A feature on a Sydney Uni academic much influenced by Indian maths genius S Ramanujan, coinciding with the release of the film The Man Who Knew Infinity
*Profiles on ANU nanotechnologist Prof Chennupati Jagadish AC; Sydney Uni mathematician Prof Nalini Joshi AO; UNSW material scientist Prof Veena Sahawallla OAM, and oncologist and writer Dr Ranjana Srivastava.
Social issues are quite a passion for Usha. In 2015-16, her articles helped raise awareness about
*Sustainably produced school uniforms manufactured in India
*Senior women’s well-being in minority communities
*The needs of carers
*Differently-abled youngsters
*The particular needs of senior citizens of Indian background
As a dance critic, Usha’s reports on the thriving classical Indian scene in Sydney maintain critical impartiality. Her particular emphasis is on youngsters who keep their heritage and traditions alive.
Passionate about encouraging youth in various areas of endeavour, Usha wrote this year about a teenage mountain climber, a 16-year-old cricketing prodigy, an 18-year-old documentary film-maker, and young colleague at Indian Link Ritam Mitra who recently won a Cricket Victoria Award for media.

As an experienced scribe, Usha has consistently generated ideas and followed leads to produce cover stories, special reports and analyses of events affecting the community. She has interviewed visiting dignitaries, political leaders, industry heads and community representatives.
Her unique selling point is her ability to report on all aspects of the community. Be it cutting edge technology or age-old traditions, business or Bollywood, cricket or the arts, Usha’s inimitable writing style has always touched chords.
“Indians are respected for their integrity, work ethic and strong desire to enrich the environment they live in, distinguishing themselves across so many platforms in the process,” Usha said. “I have really enjoyed reporting about these achievements, particularly women in STEM. They have the power to change other people’s lives”.
As a first generation migrant, her work has focused on the community but has helped build strong ties with mainstream as well, sparking a vibrant bilateral exchange.
About Indian community journalism in Australia, Usha has a clear understanding of our responsibilities and duties.
“While Indian newspapers have brought the community together and raised its profile in the mainstream by reporting about local achievements and feel-good stories, journalists have equal responsibility to turn the spotlight on unsavoury aspects. For instance, tax evasion, vocational education scams, rorting loopholes in the system, domestic violence, and wage inequalities faced by casual migrant workers. It is our duty to enlighten both our readership and authorities to prevent systemic abuse that will only ruin our well-earned reputation.”
She added, “As the profile of Indians in Australia continues to change, I would like to engage further with the community across a range of issues I have not explored before.”
Our heartiest congratulations, Usha.