A Punjabi saawan in Melb winter! 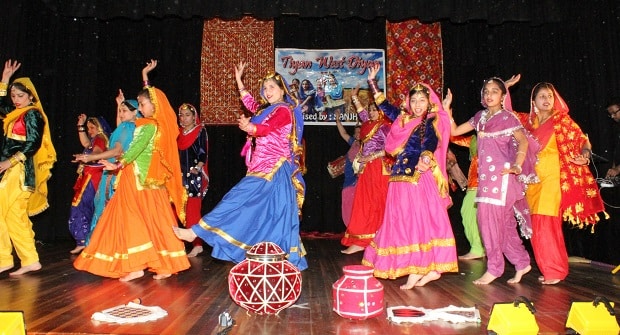 With a title like that (‘Daughters of the west’), you would probably expect pioneering women of the western world.

Well, there would be a tiny element of truth to that! Teeyan West Deeyan is the name given to the Teej (monsoon festival) celebrations organised by the Punjabi women of the western suburbs in Melbourne.

Some 700 women in the Wyndham area gathered at Mossfield Primary School at Hoppers Crossing for this women’s festival dressed in their brightest of brights, best of bling, and yes, lots of attitude!

There was singing and dancing galore as the giddha, bhangra and boliyan began, and the hearty Punjabans all ‘shook their bootys’ Rajasthani and Bollywood style. The theme skit (on dowry) and the comedy skit were perfect for the occasion, and Amrinder Kaur Toor’s mimicry and the “Bhand comedy” by Roop went down very well.

It was a cultural turn-back for everyone. And for special guest Joanne Ryan MP (Member for Lalor), it was a great introduction to some good old-fashioned Punjabi joi de vivre.

The age range of attendees was the proverbial “5 to 85”. The youngest dancer and shabad singer was indeed five, and an 85-year-old guest was honoured at the event.

For organisers Shama Bhangu, Dolly Rai, Ruby Kaur and Navneet Kaur, the July 19 event turned out to be a fantastic success, and well worth the weeks of practice and organising.

“We started this because the main events were on the east side and a bit far for us to travel,” Shama Bhangu told Indian Link. “For only the third event, it was pretty satisfying”.

The gang of four already have plans for coming years.