A passion for community service 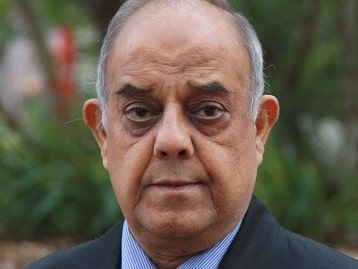 MATT KEAN, Member for Hornsby, remembers DILIP CHOPRA, a trailblazer in the Indian community in the field of politics

For almost 30 years, Dilip Chopra has been a larger-than-life figure in our community.
He was a father and a businessman, an elected Councillor and a respected community leader.

I first met Dilip when he joined the Normanhurst branch of the Liberal Party in 2003. Back then I was an energetic and very eager young Liberal.
The first thing I remember was his kindness, his smile, his reassuring baritone voice and his wicked sense of humour.
Dilip Chopra was born in Delhi in 1942 to Mr Ram Lal and Mrs Shakuntala Chopra. He grew up in Allahabad where he developed a keen interest in sports including cricket and tennis. After completing his Masters in history at Allahabad University, Dilip entered the family jewellery business working as a certified gemologist.
Dilip quickly became a successful jeweller and a shrewd businessman. It was his success in commerce that saw him look for opportunities abroad and after a short time in the UK, decided to bring his wife and young family to Australia.
The Chopra family’s arrival in Australia coincided with the Nation’s Bicentenary celebrations, a time when we acknowledged our past but looked to write a new chapter in our history.
The Chopra family like many migrant families have been involved in writing that story and have helped shape the diverse, tolerant nation which we know today.
Dilip had three great loves in life.
The first was the Liberal Party. Dilip firmly believed in the Liberal idea that anyone can get ahead in this country so long as you are willing to work hard and have a go. Dilip did not just believe in this idea, he fought for it. He was always on the campaign trail ready to door-knock, letter-box or take on our political opponents. He bled blue. Although he was small in stature, he had the ear of Prime Ministers and Premiers, such was the regard in which he was held.
His second love was his community. Dilip was not one happy to settle for things as they were, but wanted to make them as they should be. He did not want to sit on the sidelines and watch, he wanted to get involved. It was this attitude that saw him establish the Hornsby Indian Seniors group, a group that provides support and care for senior citizens in the Indian community. It was this attitude that saw him serve as Vice President of the United Indian Associations, providing outreach to new migrant families – an experience that Dilip had shared. And it was this attitude that saw him stand and be elected to Hornsby Shire Council. He believed passionately in getting involved in his community and making it better than he found it.
But his greatest love was for his family. His son Vikram and daughter Sonal – both beautiful symbols of a life well lived – were his pride and joy. They gave him much pleasure and made him very proud. They were the product of his deep and unwavering love for his wife of 46 years, Asha. She was his rock and primary counsel. Her passing left a giant hole in his heart and one that could never be repaired.
At this moment we think about his family and take this opportunity to send our deepest sympathies to both Sonal and Vikram. We thank them for sharing Dilip with our community. He will be missed.