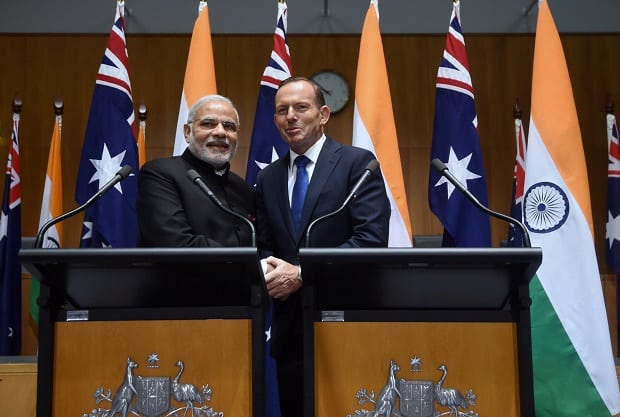 Narendra Modi is officially the first Indian Prime Minister to address the joint houses of Australian Parliament. On 18 November at approximately 10.20 am, Modi rose to share his views on a wide range of topics including the shared military history, democratic systems in the two countries, and security in the region.

That it was a historic occasion was evident from the packed-to-the-rafters chamber and the pin drop silence as Mr Modi spoke.

In a most refreshing way, the Indian Prime Minister commenced his address as he did in Sydney the day before, with a special acknowledgement of Indigenous Australians. Very early on, he made sure he had the attention of his audience by cleverly incorporating a new term in political parlance, one coined by Prime Minister Tony Abbott only weeks ago. Modi had the House smiling when he acknowledged their endurance in hearing a third international leader speak in as many days: “Maybe this is Prime Minister Abbott’s way of shirt-fronting you,” he suggested with a smile.

Their interest captured, PM Modi went on to speak about the common bond between the two countries which is etched deep into history. He spoke of the soldiers from both countries who died at Gallipoli; the architect of Canberra, Walter Burley Griffin, who lies buried in the old city of Lucknow in India; and of Australian novelist and lawyer John Lang who fought the legal battle for Indian freedom fighter, the Queen of Jhansi, Rani Laxmi Bai against the British East India Company in India’s first War of Independence 150 years ago, and who now lies buried in Mussorie.

But what PM Modi highlighted was the principle of democracy binding the two nations. In a full frontal attack on China, whose Premier was still in Australia, Modi said, “Today, as I stand in this temple of democracy, I consider nations such as ours to be blessed, because democracy offers the best opportunity for the human spirit to flourish, because we have the freedom to choose, the right to speak and the power to remove – and, for us in politics, with no option but to leave with grace.”

Warming to the theme, Modi spoke about the need for Australia and India to work together to maintain stability in the Asia Pacific and Indian Ocean regions.  Welcoming Australia’s role in the prosperity and security of this region, Modi further said, “We should collaborate more on maintaining maritime security. We should work together on the seas and collaborate in international forums. And, we should work for a universal respect for international law and global norms.” The message was clearly sent to China that they need to be aware of India’s desire for a pact with Australia and Japan to counter their growing naval strength.

With the security issue on the table, Mr Modi then built a case for greater economic engagement between the two countries. Dangling the carrot of India’s growing economic middle class, Modi urged Australia to engage more with India. He said, “I see Australia as a major partner in every area of our national priority. In providing skills and education to our youth; a roof over every head and electricity in every household; the most affordable healthcare for the most difficult diseases; the next generation of infrastructure that does not take a toll on our environment; energy that does not cause our glaciers to melt – clean coal and gas, renewable energy or fuel for nuclear power; cities that are smart, sustainable and liveable; villages that offer opportunities; agriculture that yields more and farms that are better connected to markets; practices and technology that save water.”

He also promised that “Australia will not be at the periphery of our vision, but at the centre of our thought. So, we stand together at a moment of enormous opportunity and great responsibility. I see a great future of partnership between India and Australia and, a shared commitment to realise it.”

The message was clear. India seeks Australia’s help to counter balance the growing influence of China in the region. At the same time, India is open for business, something which PM Tony Abbot has himself said about Australia. It seems that both are singing from the same hymn sheet.

The reference to cricket, but of course, found its way into Mr Modi’s address to highlight the shared passions as well as the sporting rivalry between the two nations.

As Mr Modi concluded with a simple “Thanks a lot”, it was clear that a watershed moment in the history of the two countries had occurred.