A monument to commemorate the Indian links at Gallipoli 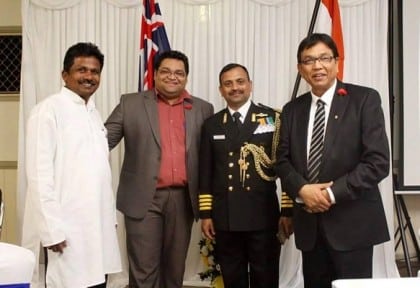 History, they say, is written by winners. Consequently there are factual gaps in narratives as historians tend to overlook vital contributions to the war effort due to political realities and biased viewpoints.

One such example is the contribution of soldiers of Indian origin towards the war effort in the World Wars.  An estimated 1.3 million Indian origin soldiers took part in World War I. 15,000 Indians are part of ANZAC history with 1400 lives being lost in Gallipoli alone. Approximately 160,000 Indian soldiers lost their lives in both wars. Currently the most authoritative account of the history of participation of the Indian soldiers is by Peter Stanley in his book Die in Battle, Do not despair, The Indians on Gallipoli 1915.
With this backdrop it is heartening to note that efforts are being made by the Australian government and also a group of Indian-origin residents of Brisbane to ensure that due credit is given to all the valorous Indian soldiers who sacrificed everything for the cause of peace. The Australia India Heritage Committee (AIHC) was formed in late 2015 with an objective to create a monument in Queensland that will have a distinct identity of its own and will commemorate the Indian soldiers of both World Wars.


The president of the AIHC, Surendra Prasad told Indian Link that he was inspired by an article that appeared in the Courier Mail on 24 March 2015 describing ANZAC history. It made him think about the apparent lack of recognition of the Indian soldiers who were very much the part of the ANZAC campaign even though they represented British India. After many deliberations, the idea of a monument commemorating the Indian soldiers slowly took shape.
“The monument is very important because we feel the Indian participation has never been properly recognised,” said Mr Surendra Prasad. “It is important for us to properly acknowledge the sacrifices that members of our community have made.”
Councillor Graham Perrett played an instrumental role by suggesting that the Returned and Services League (RSL) should be approached to see how they could participate in the project. In an astonishing vindication, RSL Sunnybank happily agreed to dedicate space on the premises of Sunnybank Veterans’ Memorial Garden for the monument.

The Secretary of AIHC Robin Jagessar told Indian Link that the Griffith University, Nathan has come on board and is playing a vital role in the design of the monument. Griffith University students are participating in the competition and draft designs will be judged by an expert panel in October 2016. Out of the three short listed designs the best design will be selected and work will commence on the building with an objective to complete the project by 11 November 2017, which also marks the 100th anniversary of Armistice Day.
On 28 May 2016, the AIHC organised the first commemorative dinner at RSL Sunnybank which was attended by Grace Grace MP as the chief guest. Also in attendance were luminaries from various walks of life and representatives of the local and state governments in Queensland such as Mark Bailey MP, Mayor Paul Pisasale, Cnr Kim Marx, Cr Angela Owen, the committee members of AIHC and leaders from the Indian community. Also attending were representatives of the Indian High Commissioner Captain Chetan Chand and former Indian military officers and the President of RSL Sunnybank Hugh Polson. The event was a resounding success judging by the attendance number of 160 people. Approximately $15,000 was raised in this very first event.

“We are not aiming for glory,” said Robin Jagessar, “and neither is this about raising money. The most important thing is that we are doing the right thing by respecting those brave men and women who took part in these wars believing in a higher cause.”
He added that the preliminary stage of the project will be about creating awareness about the historical aspects of the participation of the Indian soldiers in the World Wars. The second stage would be the selection of the design for the monument. Additional outcomes in the long run would be sponsorship of bursaries for students in the educational institutions in the local area.
“More historical research is needed,” Robin added. “We need more details from people who have ancestors who participated in these events.”
In the current backdrop of increasing frustration faced by the Indian Armed Forces over issues such as One Rank One Pension and the dissatisfaction over pay structure and emoluments in the Seventh Pay Commission recommendations, such events may be interpreted as too little and too late. However the most important thing is that the world and the Indian diaspora understand that the sacrifices made by soldiers are deeply respected and held in high esteem.
With inputs from Kushagra Bhatnagar, Robin Jagessar and Surendra Prasad.
- Advertisement -
Share
WhatsApp
Facebook
Twitter
Linkedin
Previous articleFormer CG Amit Dasgupta in UNSW role
Next articleEducation could be game changer for India-Aus ties