A mix of colours at AII Holi Fair 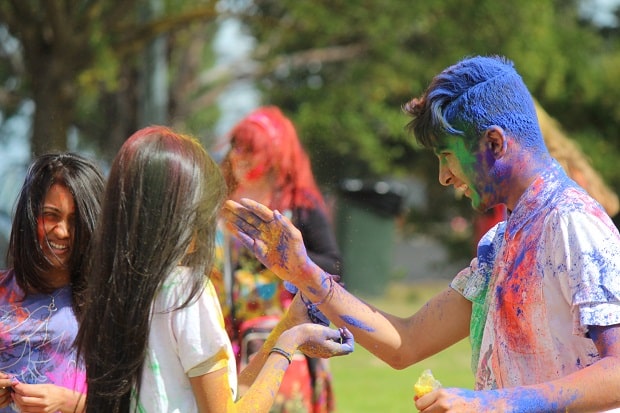 Reading Time: 2 minutesCelebration and colour brings Australians and Indians together for a fun filled event

The annual AIII Holi Fair was held on Sunday March 16, with fun, festivities and above all, colour for all! Held a day before the actual date of Holi, the AIII Holi Fair is in its sixth year, and attracted a huge number of attendees showing up to spread the love and the powder!

One of several Holi events around the city in March, the AIII Holy Fair was attended by several high profile personages including Commissioner Chin Tan, Chairperson of the Victorian Multicultural Commission; Victorian Labor leader Daniel Andrews; and Liberal Member of the Legislative Assembly Inga Peulich.

The event kicked off at 11:30am with the ritual spreading of coloured powder, followed by a short pause while the holika bonfire was lit. Then it was back on to more ‘battles of colour’; Australia’s own Desi Disc Jockeys warmed the crowd up as more musical and comedy acts prepared to hit the stage. Also present was Mumbaiker Sikander Khan, known for his imitation of the voice of Bollywood royalty Amitabh Bachchan.

As day turned to evening, Mumbai-based singers Abhinanda Sarkar and Indian Idol finalist Yashraaj Kapil took to the stage. Hilarious Pakistani comedians Irfan Malik and Ali Hasan kept the crowds entertained, while various government representatives spoke to the excited audience, and the party rocked on. Those who weren’t dancing were being jolted around on the dodgem cars or other rides, and everyone was lapping up the rich variety of Indian and international food on offer at stalls.

AIII Chairperson Vernon Da Gama called the holi event an opportunity to “showcase Indian multiculturalism within multicultural Australia”, something that was truly on show with a high level of participation from non-Indian Australians.

Speaking to Indian Link, AIII Vice Chairperson Hari Yellina explained how attendance at this annual event had begun as a predominantly Indian and Sri Lankan affair, but had now grown to include Australians of various ethnic backgrounds. “If you look at the crowd, Indians have very much gelled with the Aussie community as well”, said Mr Yellina, adding that the festival “is a lot of fun for new migrants to gel with Indian Aussies or Australian Aussies… they’re playing together – you don’t see this in the restaurants or on the footy ground”.

“The AIII festival is one of the largest Holi celebrations in Australia”, stated Mr Yellina adding, “the event is set to grow in the future. It is now attracting musical, comedy and dance acts from India, Pakistan and the wider subcontinent, as well as local artists. I predict a doubling in the size of the festival”.

AIII is Australian Indian Innovations Incorporated, a Melbourne-based group aiming “to promote, foster and empower the Indian presence in multicultural Australia”. Holi dates back to prehistoric times in the subcontinent, where it has strong links to the celebrations surrounding the cutting of the harvest in agricultural regions. Noting that Holi is at its biggest in Northern India, AIII Executive Member Neeraj Nanda commented that the celebrations are also enjoyed by communities across the religious spectrum.