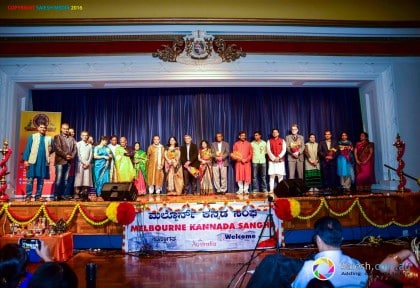 The history of Karnataka is marked by multiple identities, stories and diversity of culture. As Melbourne Kannada Sangha marked its 30th anniversary, they held an evening of Dasara and Rajyotsava celebrations where the audience were graced with on stage depictions of the greatest moments in Karnataka’s past.

Rani Chennamma, also known as Kittur Chennamma, trained in horse riding, sword fighting and archery. Born 56 years before Jhansi ki Rani, Rani Chennamma battled against the British to keep them from stealing the throne from her adoptive son. Rani Chennamma fought hard and brilliantly.
Overpowering the British in the first war, she let hostages go based on a truce that the war would be terminated, only to have a traitor placed among her army, for her to lose the battle.

On stage, the representation of the fight was spectacular. The children truly portrayed the battle and did it justice. The way they controlled the language, and provided authenticity to the re-enactment, they were truly amazing!
There was also a stage performance re-enacting the Maharaja buying a Rolls Royce in London, considered by some the biggest story of the century! Dressed in simple attire, the Maharaja entered the Rolls Royce showroom, and was told he could not afford their cars. Discriminated against and insulted, he left. He then instructed his servants to call the showroom and tell them that the Maharaja was interested in purchasing the cars.

The Maharaja returned to the showroom dressed in full regal attire and found a red carpet rolled out and was welcomed by a line of salesmen. He bought six luxury cars and paid for them in full in cash and arranged for them to be shipped to India. He then used the cars to transport and collect garbage across the country.

Proving their talent, the children depicted the story beautifully; making us feel so many different emotions all at once.
The short history lesson split up the various dance and song performances.

Melbourne Kannada Sangha was created to bring together those that are from Karnataka and to involve the younger generation in Melbourne so that the culture continues to thrive. Celebrating 30 years, the organisation has reached a major milestone. The event showcased the talent of the young ones, not only through their dance and their voices, but also their talent in speaking authentic Kannada. Proud of their heritage, they really shone on the stage no matter how nervous they were.

In the spirit of Dasera, there was a depiction of the killing of Mahishasura. The kids were fabulous! The expressions, the formations… they were just breath taking. A fast paced, intense battle sequence, was a great recipe to keep the audience gripping their seats.

The chief guest of the night was John Pesutto, Member for Hawthorn, Shadow Attorney-General and representative for Matthew Guy. Mr Pesutto, was blown away by the talent and said he was inspired and honoured to be at the occasion.

As the night was just beginning the much awaited guests took the stage – Mayur Raghavendra, Akanksha Badhami and Deepak Dodder. With an amazing intro, the three took to the stage as the audience was cheering and whistling. Mayur had us all laughing with his jokes, where Akanksha and Deepak took us to a different place with their fantastic voices.

We were up all night cheering and dancing and didn’t want the event to end. An amazing celebration that truly showcased the talent of all while also capturing the culture and essence of the festival. This night was a triumph that will go down in the history books!