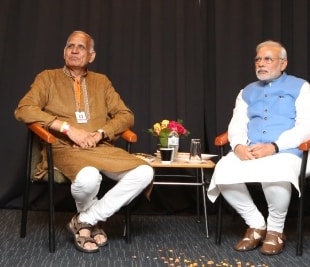 It’s an Australia Day honour for Prof. Nihal Agar, the head of the Hindu Council of Australia

This Australia Day, Sydney’s Prof. Nihal Agar received the Member of the Order of Australia (AM) award “for significant service to the Hindu community in Australia, to the fostering of cross cultural cooperation and networking and to medical education”.

A much-loved member of Sydney’s Indian community, Prof. Agar is best known as the face of the Hindu Council of Australia, and more recently, as the man who spearheaded the movement that organised the community reception for India’s prime minister Narendra Modi when he visited Australia.

“I think it is a wonderful gesture on the behalf of the government to recognise multicultural communities in this manner,” 75-year-old Prof. Ahgar told Indian Link. “It is a valuable recognition for the Hindu Council, more than for me personally, and of course for the Indian community.”

With characteristic humility, he gives credit squarely to his sathis (colleagues), who he likes to describe as “heere jawahar” (gems).

“I’ve been fortunate to have the support of some truly wonderful people in all my efforts at the community stage,” he said, adding, “It’s their love and respect that’s enabled me to contribute meaningfully.”

Under Prof. Agar’s stewardship, the Hindu Council has become Sydney’s leading Indian community organisation that draws people from across linguistic and regional divides. Its flagship event, Deepavali, is easily the best-known large-scale event in the community; it has grown strongly since it started over a decade ago while other comparable functions have waxed and waned. In recent years, it has gone from a day-long fair to much more, with a pre-event within the Sydney CBD that attracts thousands of people.

The Council also deals with enquiries from the government and from educational institutions.

As a man of science as much as a man of faith, Prof. Agar is equally passionate about multifaith issues. He speaks (or organises for a Hindu Council volunteer to speak) at various multifaith forums, presenting the Hindu note on a variety of issues, often highlighting the oneness of all religions. He has been particularly instrumental in developing networks for instance between the Hindu and Jewish communities in NSW, highlighting centuries of friendship as well as a strategic relationship in contemporary times.

A recent highpoint for Nihal Agar has been the Sydney reception for Indian PM Narendra Modi late last year, for which the Indian community in Australia made world headlines. The reception was organised by the Indian Australian Community Foundation (IACF), set up by Prof. Agar as a coalition of diverse Indian-Australian organisations who pooled their resources specifically for the event. In a move typical of his style, Agar declared that the event would be an inclusive effort, in which as many community organisations as possible would be invited to take part.

“Our aim was always to represent the diversity and pluralism that defines India and the three hundred thousand Indian Australians.”

It was a masterstroke that united the Indians in Australia like never before, and also sent the message out to the wider Australian community that they can be a formidable part of the socio-political fabric of the country.

Some 400 volunteers offered their services, some even taking leave of absence from their regular day jobs. To them, Nihal Agar proved to be a great leader and motivator.

His trademark modus operandi, which has worked so well in the Hindu Council, includes a clear vision of purpose; a working team that operates cohesively and efficiently, and a strong belief in, and dedication to, the cause.

Prof. Agar arrived in Australia in 1967 as a postdoctoral student in physiology at the University of New England, Armidale, NSW. He stayed on there for 33 years till he retired in 2000 as Professor and Head of the Department.

“That was truly the golden time of my life,” Prof Agar reminisced. “Armidale’s a lovely little country town, and as I was told by my own professor in the early years, a great place to bring up kids. I still believe this after 45 years!”

He has fond memories of UNE as well. “It is the first university outside of the metropolises in Australia. It was a happy time for me, and I shared many wonderful times with my colleagues and students.”

Upon retirement Prof. Agar moved to Sydney and became associated with the University of Sydney. He continues to be an Honorary Associate to this day.

It was way back in 1990 that community work beckoned. The establishment of a Sydney branch of the Vishnu Hindu Parishad was mooted at the time, and Prof. Agar found it struck a chord. He became President, and remained so till 2005. The annual family camp was one of the high points.

In 2004, the Ekal Vidyalaya movement in India reached out to the diaspora in Australia. In this social campaign, the remotest rural regions of India are benefitted by educational and economic development programs carried out by volunteers. The organisation runs one-teacher schools that teach basic literacy and healthcare education to children. Today, it has become the largest grassroots, non-governmental education movement in the country, having educated 1.5 million children in 53,000 schools.

As an academic himself, the idea appealed to Prof. Agar instantly and he plunged into the Ekal movement. The first year saw some 35 schools sponsored from Australia.

“As of today, Ekal in Australia sponsors 800 schools that take primary education to tribal kids across the country. I’ve now passed on the primary responsibility to others, but I am very proud to see it going from strength to strength.”

In fact, Prof. Agar lists his accomplishments with Ekal as one of his best successes in his social work career.

What does the future hold for Nihal Agar?

“I’d like to continue doing what I’m doing, tan, man aur dhan ke saath (with every fibre of my being). I’d love to see the establishment of a Hindu educational and cultural centre for our community… Also, it would be wonderful if we could have an event or two annually, along the lines of IACF’s Modi reception, which will bring the community together from across Australia and send out a good name”.