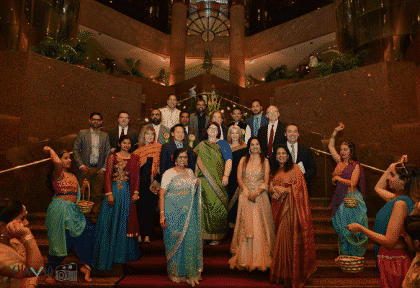 The Indian Australian Association of SA celebrates the festival of lights in Adelaide!

On the banks of the River Torrens, proudly stands Adelaide’s iconic Hotel Intercontinental, which was the seat of this year’s Diwali celebrations hosted by Indian Australian Association of SA (IAASA).

The venue truly adds to the enjoyment of any celebration, and it certainly proved right for this event. The luxurious interior of the hotel received an Indian makeover which was an icing on the cake! The entrance of the hall was decorated aptly with rangoli patterns created with flowers, colourful earthen lamps (diyas), and lit candles all around, enhancing the feel of Diwali. The presence of a colourful Ganesha statue – a true symbol of Indian-ness, with tall floor lamps and many small lighted floor candles turned the entrance into a mini make-shift temple lit with fragrance, colours and lights – in the true spirit of Diwali.

The Ballroom, with a capacity of 320, was nearly full to its brim, and a corridor at the entrance provided a vibrant place for people to meet and greet each other.
Many politicians from both sides joined the invited guests to celebrate the true multicultural event that Diwali has become here in Australia.

The Minister for Multicultural Affairs Zoe Bettison represented the Premier of SA Jay Wetherill, while the Leader of the Opposition Steven Marshall MP, President of the Legislative Council Russell Wortley, Shadow Education Minister David Pisoni, Tung Ngo MLC, Dana Wortley MP, and Chair of the South Australian Multicultural and Ethnic Affairs Commission (SAMEAC) Grace Portolesi were among many distinguished guests. Many of these non-Indian guests enthusiastically joined the dance floor to Bollywood dance numbers with the rest of the gathering.

Representatives of the Parliament from both parties vied for stage time to wish the audience a happy Diwali. They were invited to light the floor lamps before being formally admitted in the hall by walking a red carpet while being showered with fragrant rose floral petals. This mixing of Indian culture and tradition with the western created shades of a multicultural welcome for the guests. Young girls in traditional attire did a fabulous job of showering the petals.

Tradition was also aptly represented through classical dances such as the opening number of a prayer dance by the Young Stars. This was followed by a classical Bharatnatyam performance danced with great aplomb by Dr Geetha Sadagopalan. The thumping beat was provided, which the audience clearly enjoyed more, by many modern and fusion Bollywood style dance groups such as Fusion Beats, a charming duet of semi-classical performance by Jeswin and Dilrose, an energetic Bollywood number by the young boys of CWalk group, choreographed by Adelaide’s renowned dancer Navin Dakshinamurthy, and a graceful mix of contemporary style dance set to the melodious, music of A.R. Rahman by the girls from Mayuri group. Some Bollywood music karaoke performed by Sabika Jasmine completed the evening, hitting the right notes. It was a great combination of quality performances which gave the event its class and poise.

Rajni Madan did a fantastic job taking up the role of MC of the event and helping to create the temple entranceway.
The IAASA Diwali event was created by the enthusiasm of so many multicultural souls coming together. The positive feedback received from the guests confirmed that we need more sharing of cultures and creating of common shared platforms; especially when racism and terrorism are trying to raise their ugly heads around the world.
Well done to IAASA President Adi Reddy Yara, the IAASA Executive Committee, and the local artists for an outstanding event that not only entertained guests but also promoted cross-cultural awareness and sharing of values and beliefs.
Waiting for next Diwali already!