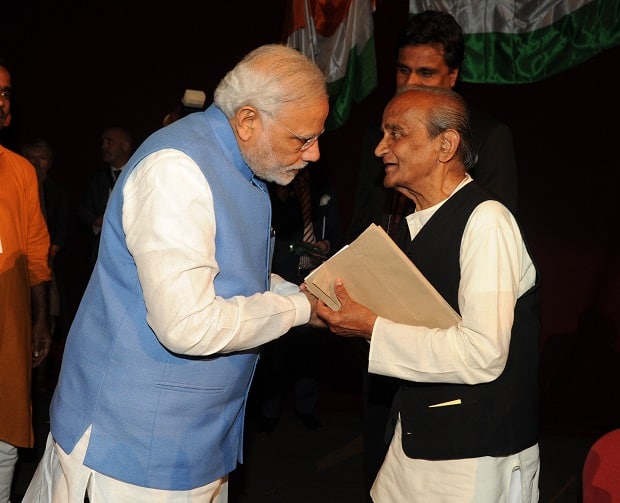 Ramesh Chandra has long been a contributor to Indian Link. The 84-year-old cancer patient’s witty political cartoons have often featured on these very pages. So we were thrilled to learn his story had been picked up by the Indian media, here in Australia to cover the Modi visit. And in a single tweet from a television reporter to the Prime Minister’s official account, Ramesh Chandra’s vision, of perhaps having a moment to bless Prime Minister Modi’s visit, became a reality.

“When he walked into the arena, he came directly to me. I was very surprised,” Chandra says. “He told me ‘I have seen your work, and I am impressed. He was asking about my health and told me to take care of myself.”

A humble man, Chandra says he was shockedPrime Minister Modi selected him to meet first. “I’m an ordinary man. There were thirty or forty other dignitaries there waiting, high level people, but he took the time to see me. I am very grateful. It was the most precious moment in my life.”

Prime Minister Modi in fact told Ramesh Chandra his work is a “service to the nation”.

Originally from Hyderabad, Chandra says he gets pleasure from keeping active by creating his political and social cartoons. “I enjoy myself, drawing ideas and exploring different aspects of Modi’s personality and career.” Chandra even created a book of his cartoons and sent them to the BJP in India and has had his work published across India.

Also a heart patient and suffering from diabetes, Ramesh Chandra says with a laugh, he’s “enjoying fighting with these diseases”. He says he’s anxious to stay busy and keep abreast of social and political events both here and in India.

An active member of the community, Chandra is a registered volunteer with the NSW Art Gallery and is also helping mould the next generation of artists by teaching children how to draw. “Often,” he says, “I try to teach them, but they teach me.”

Chandra details how he had television crews camped at his modest home in Sydney’s Pennant Hills for an entire two days leading up to the Community Reception. “I never had such an experience before,” he says. “I had no time to even breathe!”

“My enjoyment in life is to draw and laugh at myself. It is an extension of my life, my way of finding happiness.”

One of the lucky few sitting right in front of PM Modi as he made his historic speech was 43-year-old Sydney woman Shobhna Singh. Originally from Kolkata, Singh had an up-close and personal encounter with Prime Minister Modi, thanks to her creativity.

The night before the Community Reception, “I thought, to make it a memorable day, I would paint a portrait of Prime Minister Modi to give him as a gift,” Singh says.

On the day of the event, Singh thought it would be difficult to bring the artwork inside the venue due to the tight security, but “the Australian security guard saw my portrait and told me even he was a Modi fan and that I could take it through!”

Singh says everyone who saw the painting liked it and “that added to my joy”.

Though initially conceived as a present for the Prime Minister, his security detail suggested it would be better kept by Shobhna as a souvenir of the event.

“After the speech, he was about to leave the dais and I shouted ‘Modiji!’” Singh recalls. “He is so grounded, he came over to sign my painting.”

After requesting a pen, Modi signed his autograph on the portrait. “I was in tears. This was a dream come true for me,” Singh says, “I couldn’t believe it!”

Singh says she highly enjoyed Modi’s speech. “The entire crowd was mesmorised. I came to this arena last time for Shah Rukh Khan, but I think hands down Modi rocked…better than SRK!”