A billion people rise against violence towards women 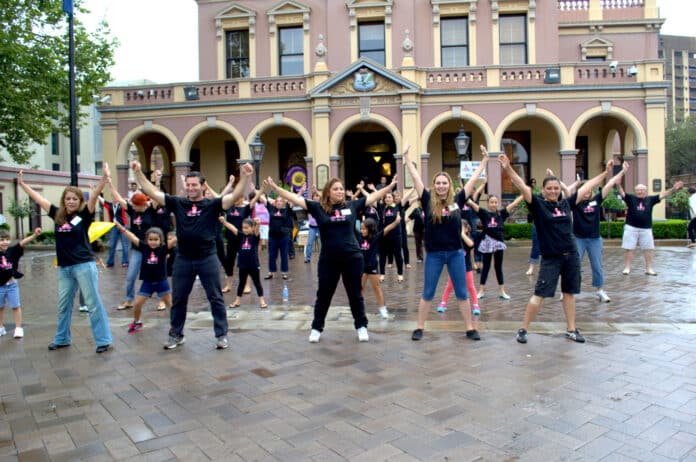 One evening in a corner of Sydney’s Prince Alfred Park, a group of people gather together to dance, while cyclists whizz past.
In another part of the city, in front of Parramatta Town Hall, a group of family and friends carry placards and dance in the rain.
A crowd of over 2000 people gather at Federation Square in Melbourne to dance and protest.
This is ‘One Billion Rising’, people gathering together to register their protest against violence towards women, through dance.
Through the day on February 14 and the weekend after, people from various walks of life across Australia joined together in a show of solidarity for this unique concept.
Brainchild of Eve Ensler, activist and writer, creator of the Vagina Monologues, One Billion Rising is a global campaign to end violence against women. The idea was mooted to commemorate the 15th anniversary of V-Day, a non-profit organisation set up by Ensler. Spurred by statistics that on average one in three women will be raped or beaten during their lifetimes which equals roughly a billion women, the movement quickly gathered support worldwide. People all over the world gathered together in groups to dance and protest on February 14, dancing to the same music, Break The Chain, an inspiring song written and composed by Tena Clark and choreographed by Debbie Allen.
With over 200 countries participating, the 2013 Rising was truly global. Eve Ensler led the rising in Congo; in India, people took to the streets in Mumbai and Delhi, and in Australia, Byron Bay was one of the first places to Rise in the morning, on the beach. And there were gatherings all over Australia, in the large cities and in the small towns.
Many of the organisers of the risings in different places are ordinary women, working professionals who poured in an extraordinary amount of time and energy into this initiative, because they felt they could not just ignore so much violence.
Nihan Nercey, organiser of one such event in Parramatta in Sydney is a primary school teacher who says she was inspired after she saw a YouTube video of a woman being abused. After hearing about Eve Ensler and One Billion Rising, Nihan decided to do something about it.  She spent the last three months getting the Rising into shape, along with four others. “There has been no family time, and my husband says he hasn’t been able to see me,” she said with a laugh.
All these women have different reasons for participating. Claire, a part of the three-member team that put together a Rising in Sydney’s Prince Alfred Park, said, “It was the statistics that got me! One billion women experiencing violence is just a billion too many, and I couldn’t just sit back and do nothing.”
In Australia, domestic violence is a big issue and Claire added, “I don’t know how it is in other countries, but here people usually keep silent about it.”
She sees this as a place to start a conversation about these problems. “I think it is important to keep the conversation going forward,” she added.
And people participated because they saw it as a way to take a stand against violence. In Parramatta, little children held placards and grandmothers held babies. In Prince Alfred Park, there were dancing men in suits and drumming women. And everywhere there were people from different walks of life who came to protest against something horrifying. There were women who had been victims of abuse, and along with them mothers, sisters, friends and brothers. And they all came together to dance with joy.
Tamar Spatz, one of the organisers of the Melbourne Rising, talked about dancing as a form of protest. “Dancing is a way for women to take control of their own bodies,” she said. “And doing it visibly was very important. Women’s bodies have become objects of sexualisation and of criticism, and this is the way to take back ownership. It is a powerful feeling, to feel ownership of our bodies. And the sight of
so many people dancing together was electrifying. It brought everybody together for a common cause”.
All the organisers acknowledged the power of social media in bringing people together and creating publicity for the movement. Despite coverage in mainstream media being limited, the response from sites such as Facebook and Twitter was overwhelming.
“Social media (Facebook and Twitter) has been awesome,” said Tamar. The rising in Melbourne which saw over 2000 people attend was started by Tamar, also a primary school teacher and former social worker. When she heard Eve Ensler calling for people to start a Rising back in October 2012, she decided to join in. Tamar realised that no one had started an event in Melbourne, so she decided to do it along with a friend. “From there it just grew and grew,” she stated. Joining hands with a few women’s groups helped the event grow bigger, with a larger vision.
Once the dancing was over, the sense of achievement and well-being was palpable. Dancing brought everyone together as a group and had a very positive effect. As one participant said breathlessly, “The world as we know it is going to change!” And a group of dancing women are leading the way!
Visit www.onebillionrising.org to find out more about One Billion Rising and to watch global Risings