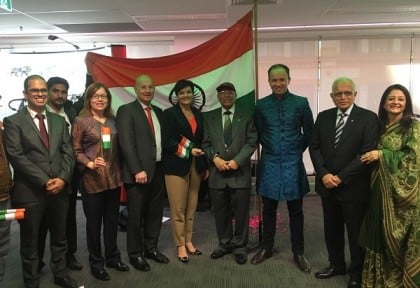 A Sydney tribute to the Tricolour
By Rhea Alok

The Independence Day celebration this week was a poignant event for me.
I moved to Australia only a couple of months ago, and it has been a little bit of struggle, to say the least.
As I sang the Indian national anthem, I forgot for some 52 seconds that I was far away from my homeland; I forgot all of my problems and struggles, and I forgot about the bitter cold into which I had arrived from the warm humidity of Mumbai.
The warmth around me at the Indian Consulate’s Cultural Centre was instantly welcoming – and reassuring!
One could sense a feeling of pride as the beloved tiranga was unfurled and Rabindranath Tagore’s wonderful verses were sung.
The Consul General B. Vanlalvawna read out the message of the President of India, following which he added his own thoughts and feelings about our great nation.
I was told this was the first time the flag hoisting ceremony took place at the Consulate premises.

As part of the cultural program, Pravin Gupta read out his poem Vande Mataram passionately – it was filled with some powerful and inspirational lines. Shobha Ingleshwar sang in tribute to our nation and the principles that have made it one of the biggest democracies in the world. The celebration of Independence Day would be incomplete without the mention of Gandhiji. Usha Shridhar paid a tribute to the great Mahatma in the form of a beautiful song about peace and non-violence. The cultural program ended with the video Spirit of India that included the various facets of India including its wildlife, diverse culture, three wings of the defense forces and places of worship, to name a few.
The event was attended by roughly 150 people, despite it being a work-day morning.
What was even better was that there were a lot of young Indian students at the event as well, to show their respect for the martyrs who fought for our country’s independence and for others who have made it great.
For me personally, the ceremony reinstated my love and respect for my country and my roots. I felt connected to all the other people in the room, and more importantly, I felt connected to India.

It was the youngest participants that stole our hearts at the recent Independence Day event at Parramatta.
At the Federation of Indian Association of NSW’S (FIAN) India Day held at Parade Ground, Old King’s School, the littlest members of the Shiamak Dawar Dance School brought the house down with their performance. The Shiamak boys, who looked no more than 12 years of age, wowed the crowds with their energy, enthusiasm and exuberance.

They were part of a day-long cultural program which included classical and folk dances not only from India but also from other parts of the world.
FIAN president Yadu Singh took to the stage to welcome the special guests. We list them here in the fine FIAN tradition of disregarding protocol about hierarchy and office: Jodie McKay, Matt Kean, Hari Harinath, Gurdeep Singh, Raj Datta, John Ajaka, Michelle Rowland, Geoff Lee, Julie Owen.

Many of these special guests spoke, and sent out messages of congratulations. Michelle Rowland’s words of welcome in multiple tongues, Jodie McKay’s Hansard presentation to Yadu Singh bearing her mention of India’s Independence Day in Parliament, Hari Harinath’s reprisal of Gandhiji’s nonviolent philosophy in these times of angst, and John Ajaka’s ‘lost voice’ that still boomed, were highlights.

As Yadu Singh pointed out, it was lovely to see some of them dressed in Indian attire: no doubt the selfie poses were put to good use on the day.
The business stalls managed to keep busy all day long. The AFL stall was a relative novelty, offering many visitors perhaps their first opportunity to kick a differently-shaped ball and score an introduction to a much-loved game in their new home.

And as the sun set and the chill came in, the giant chilli pakoras looked suitably inviting.
Was footfall down this year? The foodstall-wallahs definitely thought so, as they fretted about their numbers.
A pity, given this was the only large-scale all-day event organised this year, as UIA seems to have bowed out with its signature event at this time of the year.
To the little fellows of the Shiamak Dawar dance troupe: we hope you take that same attitude, dynamism and exuberance to whatever you choose to do in life.