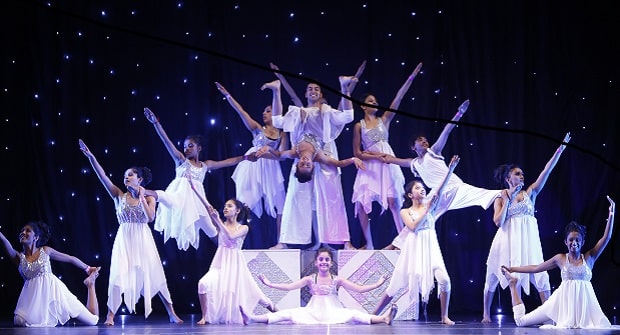 It was 100 Years of Indian Cinema and the party was at Shiamak’s Summer Funk with some foot-tapping music, animated performances and a massive birthday cake to share. Held at the Box Hill Town Hall recently, this sold out annual event managed to retain its popularity as new students from various suburbs of Melbourne, latest hit songs and fresh talent saved it from repetitiveness.
The nearly 40 dance performances unfolded on stage rapidly without preliminaries, and managed to sustain the audience’s interest throughout. It was heartening to witness the palpable excitement of the performers, the endless energy of the instructors and the variations added to Shiamak’s repertoire. From classic Rock ‘n’ Roll, melodious quawwalis to more contemporary numbers, the performances were selected to represent different eras and incorporated various genres of Indian cinema.
Shiamak’s funky mix of western and Indian dance steps, despite the recycling, never fail to entertain. The Shiamak show kids performances, Shiamak Special Potential Batch dances and the grand finale performed by Shiamak’s instructors is always a winner. Also notable this year were performances on Laaga chunari mein daag, Taaren zameen pe, Farhan Akhtar medley, Mar jaavan and Ucchi addi.
The ‘awwww’ factor was highest amongst Shiamak’s students in the age group of 4-6 who tried to copy their instructors. While some little ones assiduously shook their booty to Chennai Express’s Lungi dance a little girl decided it was far more important to shake off something from her shirtsleeve, than dance. It was the cutest thing ever to see her indignantly clean her sleeve for most of her song and then scramble to join the rest. Shiamak has always maintained that this is his favourite dance group and judging by the applause the little ones evoked, the audience obviously agreed.
As another year bites the dust, interest in Shiamak’s classes does not seem to wane; in fact there always appear to be more people wanting to shimmy and shake to Shiamak’ ‘s trendy beats. After several successful years in Melbourne, the renowned choreographer is now gaining popularity in Sydney as well. Vihang Nikalji who manages the Sydney operations says he is very pleased with the response he has received from Sydney-siders. Meanwhile in Melbourne this year the weather has been anything but summery, however the Shiamak Summer Funk certainly raised the heat quotient with sizzling performances that rocked the house.