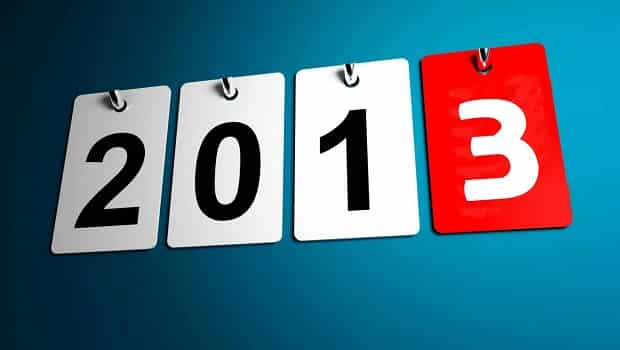 Reading Time: 4 minutesWe take a quick look at the major events that defined the year of weather woes, political movement, arrivals and departures, and the creation of the selfie

2013 is on its way out, and what a year it has been! We’ve experienced high political drama, devastating natural disasters, random acts of terrorism, births, deaths – all the ingredients that make an interesting and varied year, but one that we will be glad to confine to the annals of history. So here are some of the most significant events of the year gone by, and let’s hope that 2014 brings the world peace, prosperity and contentment.
Happy New Year!

What’s with the world?
Some things haven’t changed. Like the civil unrest in the Middle East, with Syria giving the world at large a scare relating to its use of chemical weapons. But progress has been made with the US removing some sanctions on Iran, a sign of good things to come.
Barack Obama is now in his second Presidential term, but the US shutdown has been a challenging situation, as has the spying scandal for which America is still sheepishly apologizing. Unlike our very own PM Tony Abbott who’s tough stance and refusal to apologise to the Indonesian government came as a surprise to political pundits. An unpublished letter from him to Susilo Bambang Yudhoyono seems to have resulted in a status quo.
The Global Financial Crisis continues, but it seems like everyone’s simply tired of talking about it. Let’s move on, seems to be the common sentiment, and about time too!

Weather woes
Natural disasters seem to have abounded in 2013, with a devastating typhoon in the Philippines which resulted in a massive loss of life. The floods in Uttarakand in India also caused mayhem. Closer home, widespread bushfires in New South Wales devastated land, flora and fauna, and homes. Sydney was enveloped in a haze of smoke and dust, that took days to clear.

Manmade mayhem
The year did not start on a good note with the Brazilian nightclub fire disaster in which many lives were lost, followed by the Boston Marathon bombing, sending the USA into a spiral of fear once again. Later, the Kenya mall attack by extremists brought to light the ugly strength and reach of terrorism. Asia was in the news with a tragic factory collapse in Bangladesh, and we cannot even list the numerous bomb blasts across Iraq, Afghanistan, Pakistan and Syria, among other countries, where such incidents have, tragically, become commonplace.

Australian antics
For Australia, 2013 heralded political change with the federal elections being won by a clear majority by the Liberal party. Labor lost with Kevin Rudd back in the hotseat, having ousted Julia Gillard in a non-spectacular coup. Prime Minister Abbott is already mired in the spying scandal, there seems to be dithering in relation to asylum seekers and the polls are being unkind. It wouldn’t be surprising to find Mr Abbott giving 2013 a rousing farewell!
Oddly, the media have been wasting space covering the antics of Lara Bingle, Tom Waterhouse, James Packer and any sporting celebrity you could possibly think of.
But the Australian cricket team is on a high, having resoundingly thrashed the Poms to win the first two Ashes Test matches. We’ve already forgiven and forgotten their defeat to India earlier this year!
Same sex couples celebrated the legalization of same sex marriages in Australia, with 46 couples exchanging vows recently in Canberra.

Rest in peace
Nelson Mandela died at 95, social activist and past President of the Republic of South Africa, whose memorial service was attended by a huge contingent of world leaders and celebrities. The world joined South Africa in celebrating his life, lived with dignity and his incredible journey to end apartheid in his country.
The death of Margaret Thatcher, past Prime Minister of the UK, aka the ‘Iron Lady’ was celebrated too by vocal and disgruntled people, in what was to be viewed as one of Britain’s more embarrassing moments.

Arrival and departure
The much anticipated royal baby was born and christened, and Prince George now becomes the fourth heir to the throne of England, also presenting the media with stories and speculation for the rest of his life, bless him!
Sachin Tendulkar has finally retired from Test cricket, to a tumultuous farewell. Now all that remains is to make him a minister or build a temple to honour his name!
Pope Benedict XIV resigned in February 2013, becoming the first Pope to resign his position in 600 years. But the newly elected Pope Francis, head of the Catholic Church, has been creating historic inroads within the Vatican. Numerous signs of his humility, empathy and kindness have created a renewed interest in the Church by Catholics around the world. And surprisingly, he tops the list of the world’s most talked about topics on Facebook!

Diaspora’s doings
The Indian diaspora has been in the news with a record number of Indian-origin candidates standing for elections to the House of Representatives and the Senate.
An award for local event of the year could unanimously be awarded to the Hindu Council’s Diwali Mela, which was well-presented and offered a glimpse of the festival to Sydneysiders.
Shahrukh Khan’s performance with Bollywood belles Madhuri Dixit, Rani Mukherji and Jaqueline Fernandes lent a fitting touch of glamour to Parramasala 2013.
But the most important event of 2013 turned out to be a non-event, as the Bharatiya Pravasi Diwas held in Sydney resulted in a poor turnout and non-participation by the diaspora.
But hopes are high with Tony Abbott’s visit to India on his agenda for 2014, which could result in the Indian diaspora taking on new and exciting challenges in the mainstream of industry and politics.

Selfie central
In a move guaranteed to annoy purists of the English language, the Oxford University Press, publisher of the Oxford English Dictionary, pronounced ‘selfie’ its word of the year for 2013. Everyone from Obama to Pope Francis, to Miley Cyrus has posed and posted selfies, so why not you?
Indian Link announces the Special Selfie contest, where your photograph of yourself could win an exciting prize. Just visit and you could win tickets to Sydney Festival’s Band of Magicians.