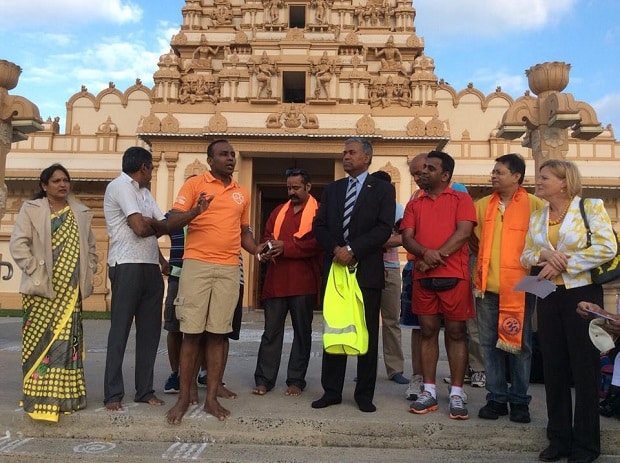 Reading Time: 4 minutesDevotees of various Hindu temples join together in a 75km walk that tests their physical, mental and religious prowess

Over a hundred enthusiastic devotees congregated yet again at the crack of dawn, outside Murugan Temple in Sydney, for the annual Westmead to Helensburgh paadayatra. Displaying determination, patience, and perseverance, the participants completed another challenging walk during the October long weekend, visiting sacred shrines including BAPS Swami Narayan Mandir, Karpaga Vinayagar Temple, and Shirdi Sai Mandir along the way.

While a core group of devout bhakthas has been undertaking the 75km pilgrimage on foot for three decades now, the event has drawn wider participation in recent years. For the first time in 2012, event organisers Let’s Give Hope, a Sydney based not-for-profit youth group, teamed up with Hindu Council of Australia as well as several local councils including Strathfield, Auburn, Holroyd and Sutherland Shire, along with NSW Police and RMS, to make the paadayatra an iconic Hindu fixture and thereby raise the profile of the community.

Meticulously planned and executed by the Walk2Temple team, the event has also brought together diverse organisations and associations in a bid to strengthen the Hindu support network.

“A lot of endurance, dedication and caution is required from walkers to safely complete this challenging walk – from crossing small streets to major roads, looking out for each other, sharing moments, and making the event fun and enjoyable, while at the same time completing a very spiritual pilgrimage from temple to temple,” said Rajesh Arshanapalli of the Walk2Temple team. “I would like to thank and commend our walkers, whose ages ranged from 10 to 70, and whose experience was just as varied.”

“Walking, in our high-speed world, has unfortunately fallen out of favour. The word “pedestrian” itself is used to describe something ordinary and commonplace,” he added. “Yet, walking with intention has deep roots. Australia’s Aboriginal youth go on walkabouts as a rite of passage; Native American tribes conduct vision quests in the wilderness; in Europe, for centuries, people have walked the Camino de Santiago which spans the breadth of Spain; in Sri Lanka people walk from Jaffna to Kataragama (north to south).”

Such pilgrims place one foot firmly in front of the other, to fall in step with the rhythms of the universe and the cadence of their own hearts, he explained.

The Sydney walkers, following in this ancient Hindu tradition, set off at around 6.30am after offering their obeisance to Lord Murugan. Their first stop was at BAPS Swaminarayan Mandir, where they were joined by other walkers and together, they headed for Karpaga Vinayagar Temple at Flemington before reaching Baba Temple at South Strathfield, where sumptuous prasadam was organised by temple volunteers.

Some participants ended their yatra at Sri Sai Mandir, having walked 14kms in all, the same distance as the City2Surf. Others joined the walk from this spot.

Looking after each other, the veteran walkers led the way through the ups and downs of King Georges Road (which they like to call “Hurtsville”), and along the serene banks of the Georges River, reaching Como Park in the early afternoon.

This 3-hour leg drained the walkers of energy, as the mercury touched 30 plus degrees. A dedicated Yatri Sevak team, who plied the walkers with fresh fruit and drinks, kept up the energy and momentum of the walkers.

The group reached Engadine by early evening where they were transported by mini bus to Lawrence Hargrave Drive for the final leg of the gruelling journey. Special blessings awaited them at the end of it all.

“We had no issues, injuries or problems,” Arshanapalli revealed, adding, “Every one enjoyed the event and hopefully rested well afterwards.”

Arshanapalli was also particularly grateful to the huge team of Yatri Sevaks or volunteers who mapped out the route, planned the event and provided the logistics.