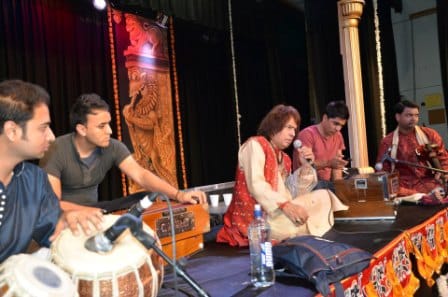 Melbourne was treated to a cascade of beautiful music on April 14 at the Kel Watson Centre at the virtuoso tabla and violin concert by Ustad Tari Khan and Melbourne’s own Sri Murali Kumar.
The evening began with ghazals from two emerging young artistes who are also pupils of Ustad Tari Khan; Ms Kalyan and Shoaib Safi presented a few items.  Soon the stage was ready and Tari Khan made a grand entry, bowing to the rapturous applause. He sat down and began the concert accompanied by Murali Kumar on the violin, Shoaib Safi on the harmonium, Nabeel Riaz on the tabla and Rami, a pupil of Melbourne’s well-known sitarist Khalil Ghudaz, on the keyboard.
Although it was billed as a Tari Khan tabla concert with Murali Kumar on the violin, the ustad announced his eagerness to begin with some ghazals in the first segment, and sang such popular ones as ‘Rajish hi sahi’, ‘Mera geet amar kar do’, ‘Kuch na kaho’, among others, much to the delight of the audience.  After the break, the classical segment began with Murali Kumar producing a cascade of beautiful raags malkauns and bhairavi on the violin and Tari Khan wowing the audience with his tabla mastery, weaving complex patterns and showing his percussion prowess, ending the evening of superlative music on a high note!
Born in Pakistan into a traditional Rababi (google to find out who Rababis are!) family, Ustad Tari Khan is one of the most accomplished tabla performers in the Punjab gharana, and a world-renowned accompanist. He began learning tabla at the age of 6 from his father, Ustad Mia Shaukat Hussain Khan of Lahore.  Khan was already an accomplished percussionist by 16, especially for ghazal performers and over the years he accompanied ghazal singers like Hari Haran, Talat Aziz, Mehdi Hassan, Ustad Nusrat Fateh Ali Khan and Ghulam Ali, to name a few. He is a versatile percussionist, who has also accompanied Pandit Jasrag, Rais Khan, Salamat Ali Khan, Vilayat Khan, Sultan Khan, Dr L Subramanium, VG Jog and others in classical music, and Shaid Parvez in qawwali.
As a soloist, Khan blends the classical with the innovative, and he has received several awards in Pakistan.  He has performed at such venues as the 1989 Percussive Arts Society Convention in Nashville and at the Boston Conservatory of Music.  Khan’s work has been included in documentaries, Pakistani feature films, and in Mira Nair’s movie ‘Mississippi Masala’.  He has also led workshops at several US Universities; has collaborated with artistes and producers from different musical genres including with the acclaimed producer Rick Rubin, and has composed music for documentaries. Lately, Tari Khan has also turned his hand to singing ghazals as well – having been fortunate to have the great Mehdi Hasan as his mentor.
Sri Murali Kumar is a sought after Indian violinist in Australia who has over two decades of concert experience under his belt.  He had his early training under Sri Kanchi Janardanan of Chennai, and later the great maestro Sri M S Gopalakrishnan.  Although the bulk of his training has been in Carnatic music, he has a deep understanding of Hindustani music as well, and has given several performances in Australia, India and elsewhere in both genres.  He has founded a music school in Melbourne and has trained, and continues training, several budding violinists.
A note on the organisers: for those of us used to the professional and crisp organisation of Carnatic music concerts, this event left much to be desired. There was confusion at the door up to half an hour after the concert was supposed to have started, and the audience waited for more than half an hour before an MC came on the stage to make announcements.  As for the ustad, perhaps he is used to behaving like a prima donna, so he asked for the lights in the audience to be switched on, the volume of his mike to be ranked up, et al – it was all a bit tedious, but was forgiven in the face of such virtuoso performance from him!
The 8th Annual Concert of the Keethana Music School was held on the evening of 13 April at the Chandler Secondary College in Keysborough. Director Uthra Vijay’s dedication to music and her students both young and old, was evident in the four hours of classical Carnatic music that showcased their achievements.
To see children, youth and the not-so-young performing with such confidence and dedication was deeply satisfying.  Many of the students have been undergoing years of training and it was clearly evident in their vocal performances.  The duets, trios and other group renderings of kritis were particularly enjoyable.  The solos were reserved for the more senior and able students, whose presentation of raga alapana, kritis and kalpana swaras was superb:  all the students did their guru proud.
The chief guest was Gopinath Iyer, renowned veena artiste, who gave students a few tips on how to improve their musical skills.