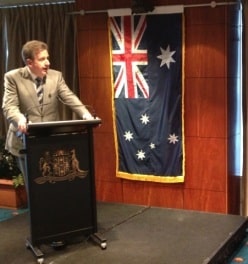 Reading Time: 2 minutesSydney will host the seventh Regional Pravasi Bhartiya Divas (PBD) to be held from Nov 10 to 13 this year

This was jointly announced by Vayalar Ravi, India’s Minister for Overseas Indian Affairs and Barry O’Farrell, Premier of NSW through a video conference conducted between their offices in Sydney and Delhi.
Also present in Sydney for the announcement were the Indian High Commissioner to Australia Biren Nanda and the Consul General of India in Sydney, Arun Goel.
Nearly 1,000 participants will attend this regional PBD from Australia and neighbouring countries, including Singapore, Malaysia, Indonesia, Fiji, New Zealand, Papua New Guinea, Hong Kong, Philippines and the Pacific Island.
“The objective of the regional PBD is to reach out to those members of the community who have been unable to participate in the annual PBD in India and to provide a platform for the Indian community in Australia and the Pacific to contribute to the relationship between countries of the region and India,” Minister Vyalar Ravi said.
“I am delighted to be jointly announcing with Minister Ravi that the strong bond between NSW, India and overseas Indians will be further strengthened during the 2013 Regional Pravasi Bharatiya Divas in Sydney”.
He added, “I look forward to officially opening the 2013 Regional Pravasi Bharatiya Divas in Sydney and meeting Minister Ravi in person. I am confident the event will be a major success”.
He also revealed that the event will generate an estimated $2.8 million of economic activity for NSW.
According to the premier, Sydney is the most important commercial city in Australia and has a large Indian community. It is the best location on the Eastern sea board of Australia in terms of connectivity with New Zealand and the Pacific Islands.
Mr O’Farrell took the opportunity to reemphasize his government’s engagement with India.
“The NSW Government is keen to forge even stronger ties with government and business leaders across India. (We have) welcomed many Indian people to our shores – tourists, students, business people and migrants who have made an important contribution to our society. Each year I lead a delegation on a trade and investment mission to India – to further reinforce the message that NSW is committed to a long-term, mutually beneficial relationship with India”.
The aim of the PBD is to connect India with its vast Indian diaspora and bringing their knowledge, expertise and skills together. The central theme of the Sydney event is ‘Connecting for a shared future: The Indian diaspora, India and the Pacific’. The session of this regional PBD will include discussions on bilateral business opportunities, skill development and technology, education and culture.
Regional PBDs are organised by the Ministry of Overseas Indian Affairs with the collaboration of the host government, the Indian mission, prominent overseas Indians and organisations catering to the needs of the Indian diaspora. Last year, the sixth series took place at Port of Spain, Mauritius from October 27-28, 2012.