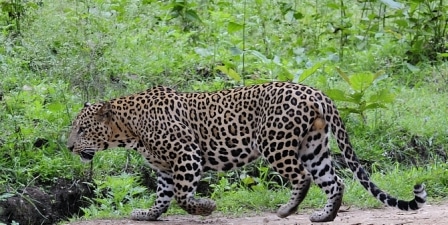 Reading Time: 3 minutesANITA PRAKESH follows the calls of the Languar watchmen to catch a glimpse of one of the largest carnivores

It was around 7am as we came bumping around the sharp bend in Kabini forest. “Kaaaarrrrr” came the alarm call from the Langur watchman. We screeched to a halt and started looking for the watchman who gave the alarm call. With an alarm that means a tiger, or leopard is nearby, it’s hardly an alarm call to be ignored. The petrified Langur was on top of a nearby tree, looking in the direction of 11 o’clock.
Our heads turned to look in this direction, but could not see anything in the bushes. A few minutes later another Langur continued the alarm call about 200 metres ahead of us, which indicated that whatever it was, had started moving.
We started the engine, which seemed to shatter the silence, and continued down the trail, stopping under the tree where the last alarm call came from. There was silence for a few minutes after this, but the Langur watchman was still visibly frightened and was tense watching looking in that direction.
The driver signalled that we move ahead and started moving with the least amount of noise possible. We climbed a crest, so that the rest of the track ahead was a downward slope. He switched the engine off, so that our vehicle bumped along with only the creaking of its suspension to be heard.
We came around a sharp right turn and all of us were holding our breath in anticipation. Finally, a majestic leopard was walking on the track about 100 metres right in front of us, and looked up startled.
We braked to a halt about 50 metres behind the carnivore, while it continued to walk at a leisurely pace, occasionally looking back at us.
I had my camera ready and started to shoot quickly whenever the clearly male leopard looked back. At one point he crossed into the bushes and looked directly at us. I managed to get a good shot of this, which shows how well a leopard can be camouflaged in the bush.
We cruised behind him keeping a distance of about 30 metres, which the leopard seemed to be fine with. Near a bend in the trail, he stopped on the side of the track and started to mark his territory, which is the usual habit of leopards, as well as tigers.
We must have followed the leopard for a couple of kilometres, after which he crossed into a lakebed and sat down. This was my longest sighting of a leopard in the wild and I had massive goose bumps. I had taken enough shots and did not want to disturb his sojourn further, so I signalled to the driver to head back, leaving the leopard to enjoy its solitude.
I think leopards are the most beautiful cats, with an agility unmatched in hunting their prey. Because of this, the role of the Langur watchmen is to sit perched on the highest point in a tree and send out a unique alarm call to the tribe, as soon as they spot a tiger, or a leopard. This call alerts the family of Langurs, as well as spotted deer, who take to their heels.
Over the last couple of years the population of leopards has gone up, which indicates a better balance between the population of prey to predator. Occasionally, leopards sneak into neighbouring villages and kill cattle or dogs. Poachers are a constant menace to this beautiful species, because as long as there are consumers for leopard skin, and other animal products, poachers will continue to exist.
My admiration and appreciation goes to all the diligent forest guards and staff who protect the wildlife for generations to come.