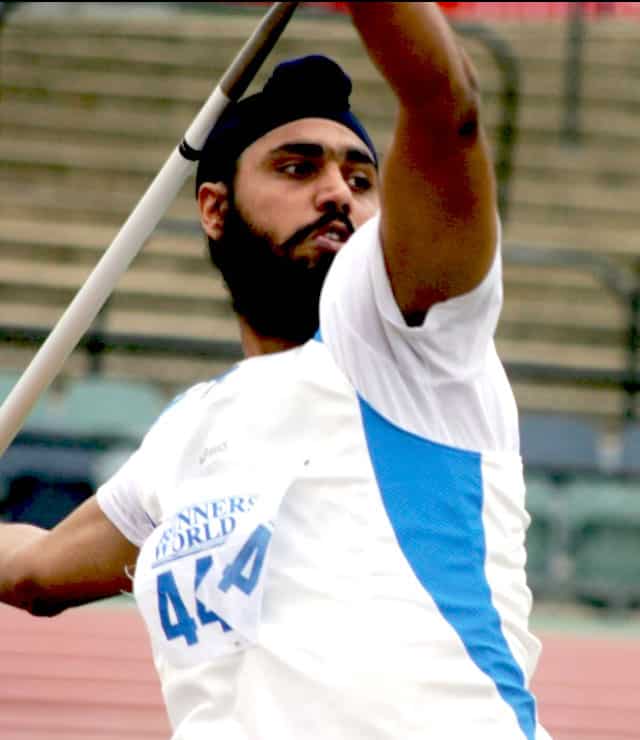 In the battle that goes on through life
I ask but a field that is fair,
A chance that is equal with
all in the strife,
A courage to strive and to dare.

This sportsman’s prayer rang like a litany in the mind of Ravinder Singh Khaira as he prepared to compete for the Victorian Open and AWD Track and Field Championship recently. The event was the Men’s Javelin Throw and Ravinder had reached the finals. The Lakeside Stadium in Albert Park had turned into his personal battlefield, and he was in it to win.
Hours of gruelling training sessions and determination came to the fore and Ravinder won the gold, coming first with a throw of 70.86m.
“It was not my personal best,” remarked Ravinder as he described the event later. “I have thrown at 74.68m in official competitions, but my aim is to reach 77m and more”.
If Ravinder throws at 77m or more, the Victorian Institute of Sports will pay for his flights and accommodation to attend competitions around Australia. At the moment he is mostly self-funded and has had to forego certain competitions due to affordability.
Ravinder came to Australia from Patiala, Punjab in 2009 as a student to do an Automotive Diploma. He currently relies on his parents in India and his weekend taxi job in Melbourne to make ends meet and to finance his own training.
“It is not easy for me to pay for coaching sessions, club membership, expensive equipment, dietician, physio and massages on a regular basis, but I have somehow managed thanks to generous friends and supportive parents, and most importantly, through the sheer will to continue and aim for a world championship,” claims Ravinder.
Twice winner of the Victorian Javelin Throw championship, Ravinder’s throw of 72.42m in the javelin event got him to 3rd place in the 2013 Hunter Track Classic in February 2013. Ravinder has also qualified to attend the Australian Athletics Tour: Qantas Melbourne World Challenge to be held on April 6 at Lakeside Stadium, Melbourne; and the 91st Australian Athletics Championships & World Championship selection trials to be held on April 11 at Sydney Olympic Park Athletics Centre, Sydney. This event is the culmination of the Australian domestic season, and more than 600 athletes are expected to represent their state or territory at this championship. In 2013, the meet will also serve as the official Selection Trials for the Australian Flame team to the 2013 IAAF World Championships in Moscow, Russia.
Ravinder is also preparing for the Asian Track and Field championship to be held in India in July 2013.
Says Ravinder’s ex-coach Gus Puopolo, “Ravinder has talent and potential. He now needs to turn his talent to distance.”
His current coach Iain Simmons agrees. “I have known Ravinder for a few years now, but I’ve only been coaching him for just over a year since I retired from javelin throwing. I believe Ravinder has the potential to at least be an Olympic finalist, as some of his physical testing is at a similar level to the world’s best javelin throwers,” he says.
He adds, “We have a goal of qualifying for this year’s world championships in Russia. To be able to reach these goals, Ravinder has to train full time – that involves 12-14 sessions per week. This makes it difficult to support himself with the high cost of being an elite athlete, with continuous costs including medical, training, coaching, dietary and travel that add up well into thousands of dollars. He does this while working as a taxi driver.  I admire his dedication to his sport and his drive to compete for his country, though this is not the best training environment for an elite athlete”.
In 2007-2008 prior to coming to Australia, Ravinder used to participate in javelin events for the National Institute Of Sports in Patiala. Between 2003-2006 he also competed on state and national levels in volleyball. He took up javelin throw around that time, after getting disgruntled with team sports and the associated politics. Ravinder always enjoyed tinkering around in his house and he decided to come to Australia to complete his diploma in Automotive.
“Australia is a country where people with sports talent aim for the best. Majority of the sportspeople here aim to be part of the world championships, Olympics or Commonwealth Games. They start by aiming very high and when they put in the effort they definitely get results.
I admire this mental strength and I feel motivated by it,” says this driven young man.
Ravinder’s story is inspiring as he strives to compete and win against athletes who are far better supported than him through sponsorship packages and monetary backing. He puts in nearly 25 hours a week in training and physical fitness, which does not leave much time or energy to earn a living.
His parents who are both teachers by profession, are very supportive and help him as much as possible.
“However, it is not much when you convert Indian money to Australian dollars,” says Ravinder practically. “I understand that financial stability is important. My friends keep chastising me for relying on my parents and not taking up a full time job; however I am convinced that this is the prime of my sporting career and I should focus on my sport completely above all other things. I am willing to put in the hard yards and qualify for the world championships”.
“I will be representing Australia as well as the Indian and Sikh communities,” he concludes
with hope.