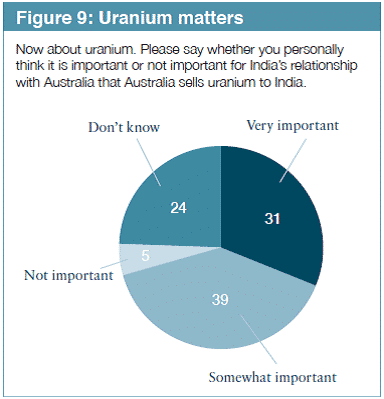 The poll, conducted in seven languages across India?s geographic regions and all levels of society, was managed by the Lowy Institute for International Policy under a grant from the Australia India Institute (AII). The nationally representative opinion survey of 1233 Indian adults was conducted face-to-face in late 2012.
The findings are surprising, considering that Indian public opinion not long ago bordered on the hostile towards Australia, with issues like the attacks on Indian students, Australia’s refusal to sell uranium to India and even the politics of cricket adding to the general feeling of distrust.
Key issues covered in the poll included: Indian perceptions of Australian governance and society, education in Australia, the Indian media, uranium sales to India, Indian Ocean security, and cricket.
Results from the poll clearly indicate that Australia is well-liked in India. Indians hold relatively warm feelings towards Australia (56 degrees on a scale of 0 to 100), which ranks fourth after the United States (62), Singapore (58) and Japan (57) out of 22 countries in the survey.
60% of Indians surveyed think it would be better if India’s government and society worked more like Australia?s. This places Australia roughly equal to Japan and Singapore. Of the 10 countries surveyed, only the United States ranked better, at 78%. However, lingering doubts still remain a about previous crimes against Indian students: 62% of Indians consider Australia a dangerous place for Indian students, although 53%?consider it safer than it was a few years ago, and 49% of Indians consider Australia generally a safe country.

Australia ranks second after the United States as a good place to be educated, according to 75% of Indians, and rates more highly than Canada, Singapore, Britain and Germany.
“Most of the results are surprisingly positive,” said the author of the poll study, Rory Medcalf, Director of the International Security Program at the Lowy Institute. “Most Indians surveyed seem to admire our society, governance and universities. Only the United States scores much higher in their warmth and esteem. But it is clear we can’t be complacent about Australia’s image or the welcome Indians receive in this country,” he added.
“The Australia-India relationship is an idea whose time has come, ” said Prof Amitabh Mattoo, Director, AII. “This poll confirms that Indian perceptions of Australia are improving, but more work is needed to build and secure this vital relationship”.
“This report focuses on our shared values and interests which have seen Australia’s relationship with India develop into one of our key strategic and economic partnerships in the region,” Australian Foreign Minister Bob Carr said. “It is gratifying to see positive results of Indian feelings towards Australia, Indian judgements of the quality of Australia’s education system, and Indian views on working with Australia in our shared neighbourhood,” he added.
However, Mr Carr also acknowledged that there were elements of the relationship where Australia needed to do more. After all, Australia’s Indian community of more than 450,000 is the fastest growing migrant community in Australia, and India is the second-largest source of international students.
In other findings, 63% of Indians surveyed see Australia as a country well-disposed to India, 59% agree the two countries have similar security interests, 60% see Australia as a good supplier of energy and other resources and 57% think it supplies good agricultural produce.
70% of Indians think selling uranium is important to Australia?s relations with India, while only 5% think it is not important.
And of course, cricket is mostly good for diplomacy. Three-quarters of Indians think the game projects a positive image of Australia, a positive image of India, and helps the two countries grow closer. Still, 35% think cricket can sometimes cause frictions between the countries.
The India-Australia Poll is a collaboration between the Lowy Institute for International Policy and the AII, and is part of a larger survey into Indian attitudes to the world. The poll can be downloaded from the Lowy Institute website